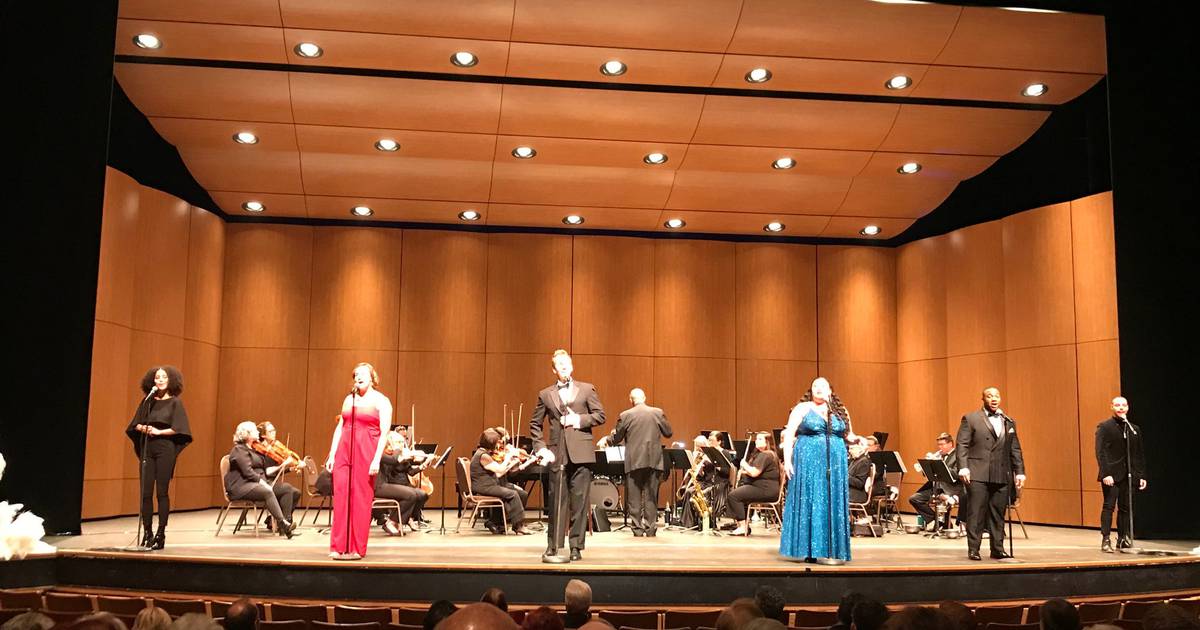 Performing musical theater in front of a live audience with real people performing on stage, a live orchestra, colorful costumes and sets, interaction between performers and audience – that’s what Music Theater Works is all about.

Wilmette-based nonprofit Music Theater Works celebrated Saturday, with an annual fundraiser at the North Shore Center for the Performing Arts. The gala and benefit concert, “The Orchestra Takes the Stage,” featured its 22-piece orchestra led by Maestro Roger Bingaman, spotlighting some of the best fan favorites from their 42-year production history.

Production Artistic Director Kyle Dougan said the gala’s goal is to raise $100,000 in funds for the 2023 season and support Music Theater Works Youth Reach programs that cater to children ages 8 to 18 years old.

“At Music Theater Works, we are firmly rooted in traditions while seeking to expand our musical theater offerings,” Dougan said.

Leaving Northwestern’s Cahn Auditorium in Evanston last year, this was their first full year of expanded programming at the North Shore Center for the Performing Arts in Skokie, Dougan said.

“At the smaller North Theater we program reimagined and innovative musicals like our production of La Cage aux Folles, where audiences joined the cast on stage at cabaret tables, or our upcoming intimate production of Camelot with a cast of just eight and new orchestrations,” Dougan said. “We will also continue to produce large-scale offerings, in Center Theater with large sets, actors and a full orchestra, such as our upcoming production of White Christmas. “

Saturday’s concert celebrated musicians, those whose faces are not often seen. Those in the theater pit, not wearing glamorous costumes, but engaging their musical artistry at every performance, Dougan says.

“We selected from a list of favorite orchestrations, those works that provided us with beautiful ways to showcase the orchestra,” Bingaman said. “The Brigadoon sequel, Billy Elliot’s Swan Lake moment, the Oklahoma opener and Cabaret title track, and more, all peppered with vocal performances by stars of Music Theater Works.”

“It was important for us to bring the orchestra to the fore – out of the pit and on stage,” Madonia said.

Saturday’s event was a tribute to the past, at a time when, like all theaters, Music Theater Works is still redefining its post-pandemic identity.

The hope, Madonia said, was that the concert would inspire Music Theater Works patrons to give more aggressively in 2022-23.

Northbrook’s Lyn Dickey said she has supported Music Theater Works since their first show in 1997.

“I love Music Theater Works, for the geographic proximity of the performances, the talent of their performers, and the variety of productions – these shows are as good as anything you find in New York,” Dickey said.

Gina Grillo is a freelance journalist at Pioneer Press.

Will British Columbia have a bank holiday for the Queen’s funeral?