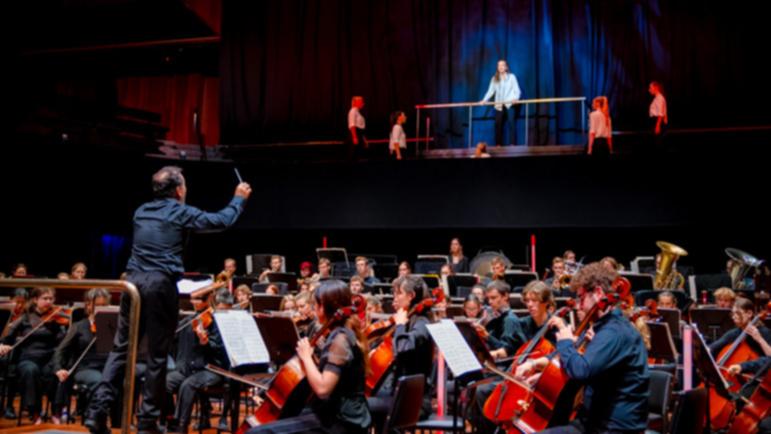 The WA Youth Orchestra brought pagan energy and abundant promise to the Perth Concert Hall for Stravinsky’s Rite of Spring on Saturday, with sweeping choreography to freshen up a classic staple.

A languorous opening belied the explosion that followed, channeling the groundbreaking impact of the original Paris season in 1913.

Then as now, art imitated a disturbed social and spiritual world, and the main drivers of both would be the youth.

Six trampolines on the apron stage gave energy and elevation to six ballerinas whose angular, awkward movement mirrored the music, reflecting the impact of Stravinsky’s era in an incisively honored Da Da-like discord in the dance, booming offbeats and harsh melodic lines.

Choreographer Scott Elstermann has teamed up with conductor John Tooby and the corps be ballet – Briannah Davis, Giorgia Schijf, Ella Watson-Heath, Ellie Matzer, Meg Scheffers and Jo Omodei – in an interdisciplinary initiative WAYO dubs Merge; giving dance an all too rare outing in the concert hall.

Euphoria and mystery played in equal parts against a massive orchestral palette; nine horns, six trumpets, five each of flute, oboe, clarinet and bassoon, plus a full set of strings and percussion describing the arc from eros to thanatos in a clinical depiction of chaos.

The concept has since been defined in mathematics, but in Stravinsky’s day, only art could express it.

An orchestra can set its own tempo, with or without a conductor, but the coordination between the front and back of the stage was disciplined, even surpassing the shaking of the trampolines.

As the music cooled for the second act – The Sacrifice – the dancers lay on their backs, struggling for life with a more conventional ballet move, the trampoline disc now ritualized and turned into a trial as if by fire, with the “Chosen Virgin” emerging from the fray in a poignant and solemn moment.

Perhaps the closest contemporary myth would be Lord of the Flies, with its fateful trajectory from fragile order to destructive tempera, taken up by music in a remarkably modern idiom; melodrama played loudly in the choir stalls, prompting a huge ovation to close the evening.

The dance had made its pre-intermission debut in an Australian premiere of WA composer Rebecca Erin Smith’s Foreigner or Foreigner, written as a master’s thesis at the Manhattan School of Music and first conceived as a ballet.

A carpet bag at center stage acted as a memento mori – a symbol of fate – as blue light and a flurry of graceful bodies in the aisles broke the fourth wall.

As if to mirror Stravinsky, a stranger was pulled from the body, rocked from pillar to post as broad, programmatic phrases invoked distance and wonder; the traveler alternately helped and hindered, walking as if on air to the dreamlike tones of the orchestra.

Again, the concord was fragile, as the percussion and jagged woodwinds, augmented with brass, seemed to follow the dance’s conflicting narrative, even though the music was the main driving force.

Earlier, the young ensemble launched into the overture to Tchaikovsky’s Romeo and Juliet with mystery and majesty in a woodwind chorus, passing through bass, cello, horns and violin, then turning into gentle meditation .

There was an assurance in the rise and fall of dynamics under Tooby’s direction, fitting seamlessly into the drama of Montagues and Capulets with a clashing sharpness of brass swords and percussion; trumpet, trombone and tuba a close combination.

Another tight transition to the theme of love put flute and horn in a tender duet before returning to conflict, the twin themes of love and death carefully intertwined by musicians barely older than the lovers. originally cursed.

The drama of low brass and percussion heralded a melodious cello with a hint of native folklore in the rise and fall of the whole, a pleasing skillful dynamic in the whole and in the parts.

Stentorian brass over powerful percussion invoked martial spirits, but as in the Tchaikovsky, it was balanced by soulful accents in strings and woodwinds; another intertwining of love and death.

Any idea where he’s been