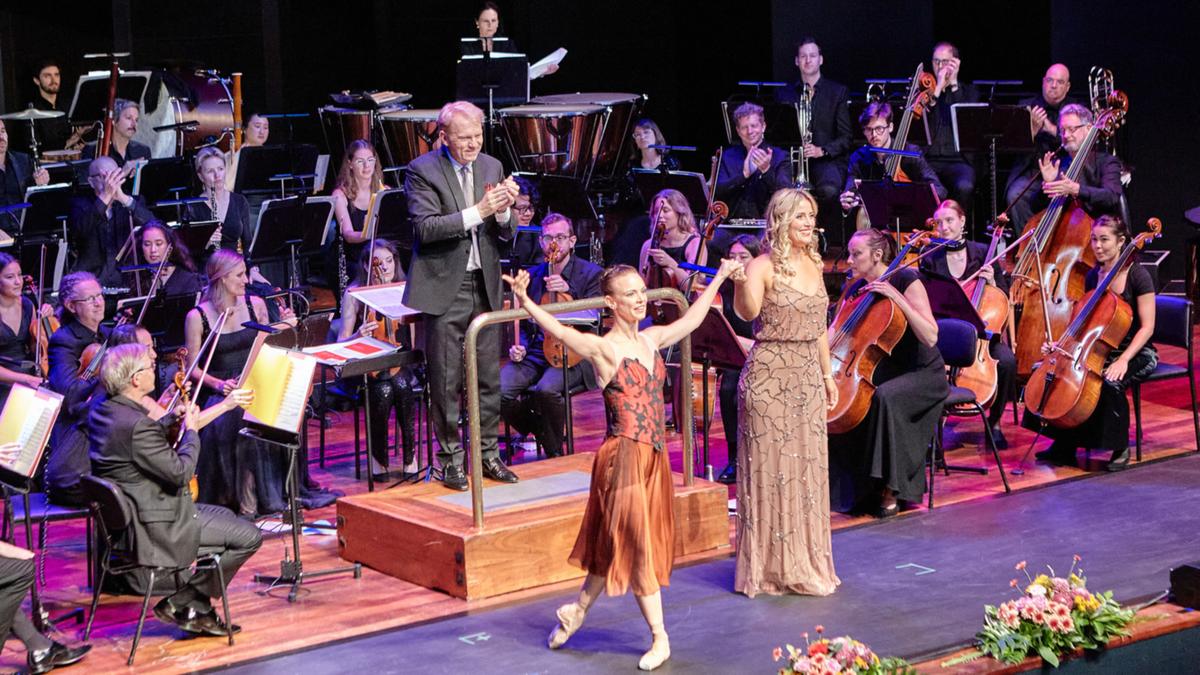 New Year’s Eve arrived early at the Perth Concert Hall with an assortment of Strauss from the Vienna Pops Orchestra conducted by Mark Coughlan and a surprise bombshell of songs.

Mezzo-soprano Ashlyn Tymms promised and delivered a range of styles and registers, heralded with a Stentorian fanfare for Augustin Lara’s Granada, the Spanish tang ushering in a commanding presence and a voice rising effortlessly through the range, deliciously expressive and scintillating with notes of grace on an extravagant extension. phrasing; a radiant generosity reflected in the bravery of the brass.

Compare that with My Heart by Saint-Saëns, from the opera Samson and Delilah; swelling emotion and eloquent melody coupled with the waif figure of WA Ballet demi-soloist Claire Voss shaping peak counterpoint, echoed in Ashley Smith’s clarinet and back to Tymms in a sequence of pin-drop moments .

The Latin flourish and a voice well-suited to the French lyrics promise a treat in store when Tymms channels Carmen for the Perth festival in February.

She teamed up with rising baritone star Devon Lake, whose solo You Raise Me Up (Lovland-Graham) brought a hometown scream to the 19-year-old WAAPA student, demonstrating tone, range and expression. fuller tracks from the same gig last year, defending themselves against a full orchestra with full-throttle horns.

Tymms followed with the Ellington classic It Don’t Mean a Thing (If It Ain’t Got Swing), a nuanced vocal of blue notes in the introduction, swaying to the beat and up the octave and down; coax and tease the public.

The singers combined for The Prayer from Foster-Bayer Saga, with a shading alto Tymms in the intro – a natural fit of timbre and pitch. Tymms then exchanged phrases with Lake in a duet more than the sum of its parts; seemingly popping one of the many balloons hanging overhead in the triumphant conclusion.

Smith also took center stage for a mystical rendition of Nature Boy (Ahbez, arr. Turley), a mournful horn setting the tone for a velvety clarinet solo mirrored in flute and then oboe, meditative and hypnotic in its minimalism .

A sonic hiss explored the heights of the hall before turning into an elaborate cadence over bass pedal notes, like a bird’s song in a cavernous cathedral – imitated by more than one child in this matinee performance .

Smith also led a robust reading of Gershwin’s Rhapsody in Blue with a low trill and blues-tinged glissando, pitched to Brent Grapes on wha-wha trumpet and Coughlan on keyboard.

Concertmaster Paul Wright shared the baton with Coughlan here, unleashing the sprightly theme in full orchestra, taken up by sturdy trombones. A virtuoso piano cadenza led in the slower section, rich in strings, winds and brass, before ending on the finale with gravity and swing.

The purely orchestral numbers were all Strauss, from the ironically titled Without a Care: Fast Polka – in a week when on-off restrictions had put the gig in doubt – to a lively rendition of the Tritsch-Tratsch (Chit-Chat) Polka, culminating in the Blue Danube Waltz.

The ethereal opening of the horns over shimmering strings—perhaps the best-known invitation to dance—erupted into the waltz, singsong and uplifting, languid and limpid; a prayer, perhaps for a smoother ride in 2022.

And no Viennese festival would be complete without a frenzied encore of Radetsky’s March to Rock the Night.

Faster Than Sound: A Year’s Headlines in Limbo: A Flurry of Industry Activity in an Intermittent Reopening Scene – Music