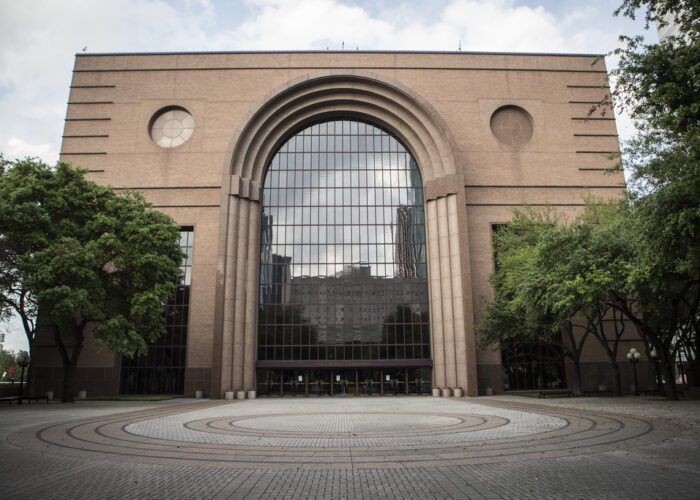 The Houston Grand Opera thinks outside the box

But first Patrick Summers, artistic and musical director of HGO, and his colleagues had to reckon with a pandemic that had turned their industry upside down. The loss of the company’s Spring and Fall 2020 directory (since extended to Winter 2021) – compounded by dozens of furloughed freelance artists and designers and nearly a third of its colleagues from HGO who were abruptly fired – has caused what he calls “a weird kind of grief” to take hold.

“It’s in the context of people losing lives, and what we’re losing are the live performances and the gatherings of people that the arts do,” says Summers, HGO’s Margaret Alkek Williams Professor. “What the arts do is bring people together, and that became the one thing we couldn’t do.”

Working in a vocal performance-based profession presented its own set of unique challenges. Scientists have identified singing as one of the most effective ways of transmitting COVID-19; “It’s right there with the sneezes,” Summers notes. To chart the way forward, he and his HGO colleagues spent months “figuring out what we couldn’t do.”

The venture was assisted by the newly created Health Advisory Committee, made up of physicians affiliated with Methodist Hospital, including specialists from the Texas Voice Center and the Center for Performing Arts Medicine.

Details: Performances will be streamed for free on houstongrandopera.com and marquee.tv. Marquee is a subscription-based arts channel that will host all-new Houston Grand Opera content and allow users to access it for free through their website, app, Roku, Apple TV, Fire TV and other platforms.

“They gave us a rigorous set of protocols to rehearse, to test,” Summers says, “that we felt we could deliver works of a certain size, meaning very small-scale works.”

The one thing they never considered was canceling the season altogether.

“It never occurred to me or anyone that we wouldn’t produce anything,” Summers says. “Like all of our colleagues around the world, we are ‘The show must go on’ people.”

Around May, according to Summers, he had begun to identify works he thought HGO could produce under the altered circumstances of COVID. He ended up with nearly 100, then began researching them to see which ones might work for performers who were scheduled to appear in freshly canceled productions and which could work while enforcing protocols such as social distancing on stage. A million dollar grant from longtime donors Ernest and Sarah Butler, to be split between HGO and Austin Opera, helped the company cross the finish line.

“It became a creative opportunity to look at repertoire that I find fabulous, but we would probably never perform during the big opera season,” says Summers.

Featured drama productions will be shot in a variety of locations, including location and artists’ homes. Selections include “Vinkensport, or the Finch Opera” by David T. Little and Royce Vavrek – a comedic exploration of the obscure European sport of the seated finch – and a contemporary adaptation of Mozart’s “The Impresario”.

Summers knew he wanted to include “healing Mozart,” he says, so he asked playwright Jim Luigs — author of the honky-tonk rewrite of Wagner’s “Das Barbecu” — to adapt a work from a 1786 contest between Mozart and his sworn enemy. , Antonio Salieri. The result “places him in this time of Zoom and in this strange isolated world, and also places him in Texas,” says Summers.

“Impresario” will be featured in a double bill with “Bon Appétit!”, which composer Lee Hoiby based on an episode of celebrity chef Julia Child’s TV show “The French Chef.” Superstar mezzo-soprano Jamie Barton, who appeared in last winter’s production of “The Favorite,” plays Child.

“Again, we wouldn’t normally perform, but Jamie Barton’s portrayal of her is so extraordinary,” Summers said.

Because the planned world premiere of “The Snowy Day” fell through, HGO commissioned a documentary about Joel Thompson and Andrea Davis Pinkney’s operatic adaptation of Ezra Jack Keats’ beloved children’s book. With actual production delayed to December 2021, the film examines “what happens to a world premiere in the midst of a pandemic,” says Summers.

HGO Digital’s fall season also includes a number of recitals and concerts that will be filmed at the Cullen Theater at the Wortham Center. Premiering will be soprano Tamara Wilson – seen earlier this year in the title role of “Aida” – on September 18; Other singers scheduled so far include Reginald Smith Jr. and Arturo Chacón-Cruz.

Tenor Lawrence Brownlee will resume his well-received “Giving Voice” concert on January 22, joined by co-host and frequent HGO star Nicole Heaston – an idea that Summers says was “pre-pandemic.” A showcase of popular emerging talent, the Concert of Arias returns (virtually) on February 5.

To make all of this happen, HGO staff and performers are tested weekly for the coronavirus; Summers says he got his results in four or five hours. The singers will rehearse masked, except perhaps the last passage, and will perform without them. The casts are small (one in “Bon appétit!”), and social distancing will be built into the staging. The most people on stage at a time will be 30, for a production of “Hansel and Gretel” by Engelbert Humperdinck.

“All pieces will be performed in a way that maximizes performer safety,” Summers said.

To find an audience for its digital programming, HGO turned to Marquee TV, the online home of the Bolshoi Ballet, the Royal Shakespeare Company and other high-profile organizations. The streaming service, which the Financial Times has called the “Netflix of the arts,” is available through Amazon Fire TV, Roku, and other platforms; a subscription is required. HGO will be the first US-based performing arts group available on Marquee TV.

While not exactly by choice, Summers thinks HGO Digital could be part of what he calls a “tectonic shift” in the way the arts are presented.

During the pandemic, “I think the public has gotten pretty used to the availability of art,” he says. “And look: the need for art in our lives doesn’t change just because the world changes.

“People need this so badly, and I still think and believe they need a live show, but since that’s impossible, they go for what they can find,” adds Summers. “And so it’s always our responsibility to make the highest quality art possible and deliver it to them in a way that’s safe and accessible.”

That said, Summers is clear that HGO Digital’s fall offerings are intended as a substitute, not a replacement: “Our biggest goal is to get back to live performance as soon as possible,” he says.

But in the meantime, the show must go on.

“I hope the (digital) program will be enjoyable for people, enlightening for people, healing and cathartic for people,” Summers said. “That some of them will make you laugh because there are a lot of them that are on the light side.

“And,” he adds, “as people heal from the isolation of these (last) months, they realize that the arts have a huge role in that healing process.”

Chris Gray is a Houston-based writer.