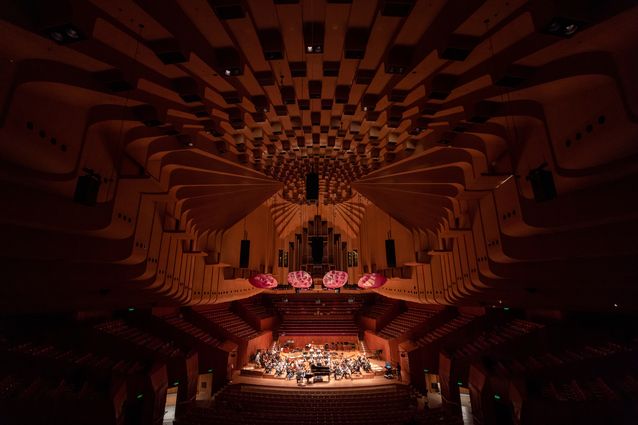 Sydney Opera House has unveiled the completed transformation of the iconic concert hall – the biggest and final project in its 10-year renovation program before the building’s 50th anniversary in 2023.

Designed by ARM Architecture and a team of acoustic, engineering, heritage and theater consultants, the project combined restoration and technological innovation that transformed the acoustic properties of the venue, allowing the concert hall to host a range of performances ranging from classical symphonies to contemporary music and theatre.

Inside the concert hall, 18 new acoustic reflectors replaced the old donut-shaped acrylic reflectors on the ceiling. ARM Architecture designed these new petal-shaped reflectors in collaboration with German acoustic engineers Müller BBM. They are made from fiberglass composite by racing yacht manufacturer Shapeshift and Waagner Biro.

The semi-gloss magenta color of the reflectors matches the upholstery for the audience seats in Peter Hall’s design for the concert hall interior.

Elsewhere, special acoustic diffusion panels have been added to the wooden facades of the concert hall, allowing for a more balanced and truer sound in classical orchestral mode.

The Sydney Opera House concert hall had been plagued with acoustic problems since it opened in 1973. A 2011 Limelight magazine survey of artists and critics found the concert hall ranked 18th out of the 20 listed classical music venues in Australia.

“All great orchestras in the world have a symbiotic relationship with their home venue, they become synonymous with the space. Where an orchestra performs is just as important as the instruments and musicians that are on stage – it shapes the way we sound and how an audience experiences live performances with us,” said Andrew Haveron, Sydney Symphony Orchestra Concert Master.

“The extraordinary acoustic upgrade to the Sydney Opera House Concert Hall, which far exceeded all of our expectations, means that finally the Sydney Symphony Orchestra can be heard at its best!”

A new sound system for the amplified mode was installed, along with automated stage lifts, an automated draping system, and a new theater flight system for lighting and sets. The original stage was also lowered by 400 millimeters to improve stage visibility.

The renovations also included improved accessibility with a new lift and walkways, doubling the number of accessible seats.

More than 90% of construction demolition waste was recycled. Reclaimed wood from the old stage was turned into 60 pairs of clapsticks for Indigenous composer and performer William Barton.