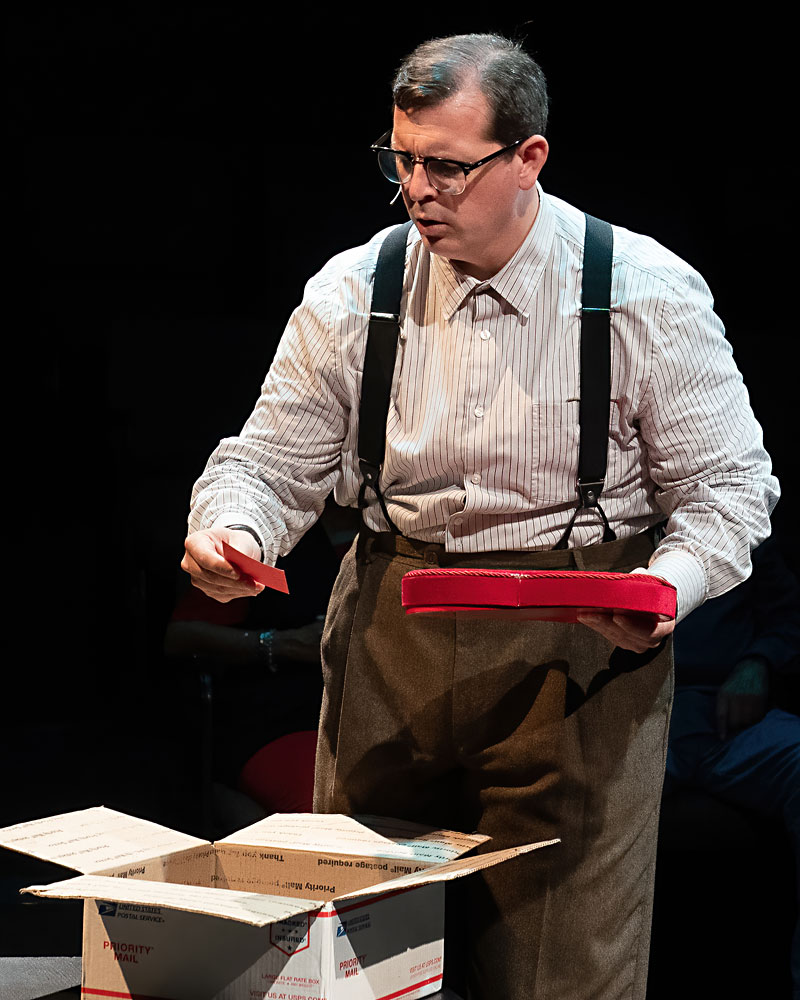 Somebody Loves You, Mr. Hatch“/>

Nathan Jerkins as Mr. Hatch in the Zach Theater production of Someone loves you, Mr. Hatch (Photo by Suzanne Cordeiro)

It’s strange and a little disorienting that Zach Theater’s revival of Someone loves you, Mr. Hatch, which takes place during Valentine’s Day, opens in April and ends in May. It’s like staging a Nativity play in August. But the idiosyncratic planning is the least of the initially off-putting tweaks that turn Eileen Spinelli’s beloved children’s book — a delightful 11-minute bedtime read — into an hour-long stage production.

The story features Mr. Hatch, a lonely small-town recluse who lives a yawning life until he receives a mysterious candy box for Valentine’s Day with an anonymous note that reads: “Someone loves you”. The note fills his heart the same way a view of the similarly worded mural on the side of Jo’s Coffee in SoCo fills ours. For Mr. Hatch, his journey to find his secret admirer becomes a worldview awakening – a celebration of friendship and social connection with a healthy dose of life lessons on kindness.

Returning from the first production of this COVID-reduced show in 2020, Paul Sanchez as Mr. Smith, the newsstand operator; Amber Quick as Mrs. Todd, the grocery store operator; and, on opening night, Stella Frye Ginsberg as Melanie, Mrs. Todd’s teenage daughter (with Chloe Van De Graaf and Lila Gonzalez playing the part in other performances). Nathan Jerkins joins the cast as Mr. Hatch.

Except for a few tweaks to the original book – including the infusion of seven original songs, accompanied by pre-recorded music – Allen Robertson’s adaptation stays true to the story. But Robertson, who is also the show’s director and music director, takes a more radical approach to storytelling.

Upon entering the Kleberg’s in-the-round performance space, it is immediately clear that no attempt has been made to replicate the whimsical illustrations in Paul Yalowitz’s book or to capture his creative vision. The artist made wonderful use of the base colors of Crayola crayons in his images and portrayed Spinelli’s characters as if they were vintage vinyl Colorforms cutouts glued to flat landscapes of a park, a grocery store and the humble home of Mr. Hatch. For this production, the black box theater is unadorned except for an actual black box in the center of the stage, and the only colors to be found are the muted colors of Christina Montgomery’s signature costumes, which are worn by the actors mingling with the crowd before the show begins.

Adults experienced with children’s theater manners know this might be a good time to arm their little ones with a big bag of gummy bears and themselves with a gummy of a different variety to pass the next hour that is no-frills, low-budget manufacturing. However, the show begins with the performers playfully addressing the audience directly and casually engaging them in conversation, and it’s apparent that the lack of bells and whistles focuses all of our attention on these talented actors and their brilliant performances. .

Everyone does a stellar job of fleshing out their characters, nailing their beautiful harmonies, and creating a joyful play. But Jerkins’ subtle and very moving depiction of Mr. Hatch, both before and after his spiritual transformation, is something truly special. The same goes for Ginsberg’s abundantly charming handling of the show’s narrative duties and orchestrating the abundant audience participation in the production, which includes clients briefly playing minor characters. On opening night, one of the highlights was when the audience member called in to be the postman broke down in tears when he broke bad news to Mr Hatch late in the show. She, Ginsberg, and most of those present cried for the rest of the production.

In short, this is a tight professional production that will hold a child’s attention for an entire hour and keep adults engaged and entertained alike. But for those who are put off by no-frills theater with a lesson plan, at odds with public displays of emotion, and in fear of being called upon to perform something they’re not, this medical edible is always an option.

This review has been corrected after publication to reflect that this production has an original score.

Alamo Drafthouse is hosting a special LOVE, DEATH + ROBOTS event on May 10 with a preview of Volume 3