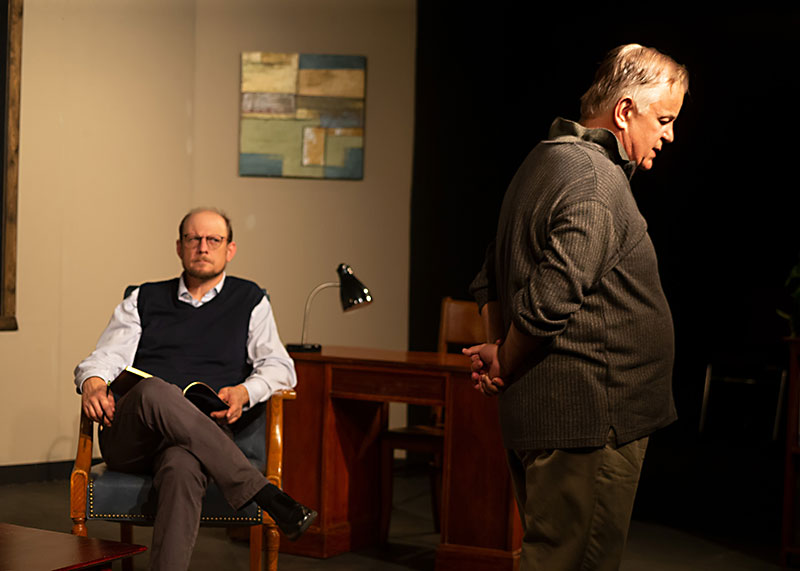 Irish playwright Conor McPherson is a master storyteller. His tall tales are as powerful as they are poetic, and while each is a unique and well-crafted creation, they share signature tropes that make them instantly recognizable as his own. They tend to take place over a short period of time, which generates a strong sense of immediacy and urgency in their narrative. The person telling the story does so with long monologues that are more confessional than theatrical. And there’s always a weird, otherworldly element – the vampires in Saint Nicolas and the devil himself in The sailorfor example – which bites the heels of the play’s otherwise austere and quite dramatic realism.

But the devil is in the details when staging their plays, which is a lesson learned the hard way by Different Stages in their current production of shiny city.

At the center of this piece, first produced on the Emerald Isle in 2004, is a middle-aged middleman for a catering supply company named John (Rick Felkins), whom we meet during his shoots. therapy with Ian (Sam Grimes). John is, in fact, one of the first patients of Ian, who recently left the priesthood and hung his shingle in a dilapidated office building in Dublin city center (rendered, it seems, on a budget tightened by scenographer Elaine Jacobs). John is a recent widower and continues to see his wife, Mari, who died in a car accident. His visits to their home frighten him so much that he lives in a local bed and breakfast and is too unable to go to work.

It’s not just John’s wife that haunts him. He is also plagued by a suffocating loneliness due to his inability to connect and communicate with others, as well as a debilitating sense of guilt for keeping his wife at a distance and craving the company of other women. Loneliness and guilt are traits that define all the characters in this play, including Neasa (Adrienne Gilg), Ian’s girlfriend and baby mum, and Laurence (Weston Smith), a young man working the streets of Dublin. who goes to Ian’s. Desk. In short, shiny city is an intriguing character study masquerading as a one-act play.

As if to reinforce everyone’s isolation and social dysfunction, none of the characters in this play have a home, all have sought out unfulfilling and shameful sexual encounters, and no more than two of them are on stage. at a time. time. And everyone speaks, to varying degrees, with fragmented, often self-interrupting half-thoughts, interspersed with Harold Pinteresque pauses and David Mamet-esque profanity. And like the actors in a production by Mamet or Pinter, those gathered here must find the rhythms in the words which, in turn, give rhythm to this play.

Felkins captures the immense weight of grief her character carries well, but the delivery of her sustained monologues, which are peppered with lamentations of “you know”, have no sense of immediacy, urgency or urgency. musicality. Grimes, too, does a great job playing angsty Ian and he pretty much nails the execution of those excruciating hesitations in his speech. But his fellow actors are doing him a disservice by being late with their next line, which leaves Grimes hanging and the audience waiting.

Under the direction of Norman Blumensaadt, everything during the opening night production was played too slow a pace, including scene changes. These overlong breaks in the action give clients time to gather between episodes of staged angst, so that the emotional distress we feel during one scene doesn’t carry over to the next or does not build by the time we reach the play’s dramatic conclusion. Therefore, shiny city comes across as a lesser work, which is not what McPherson had in mind.