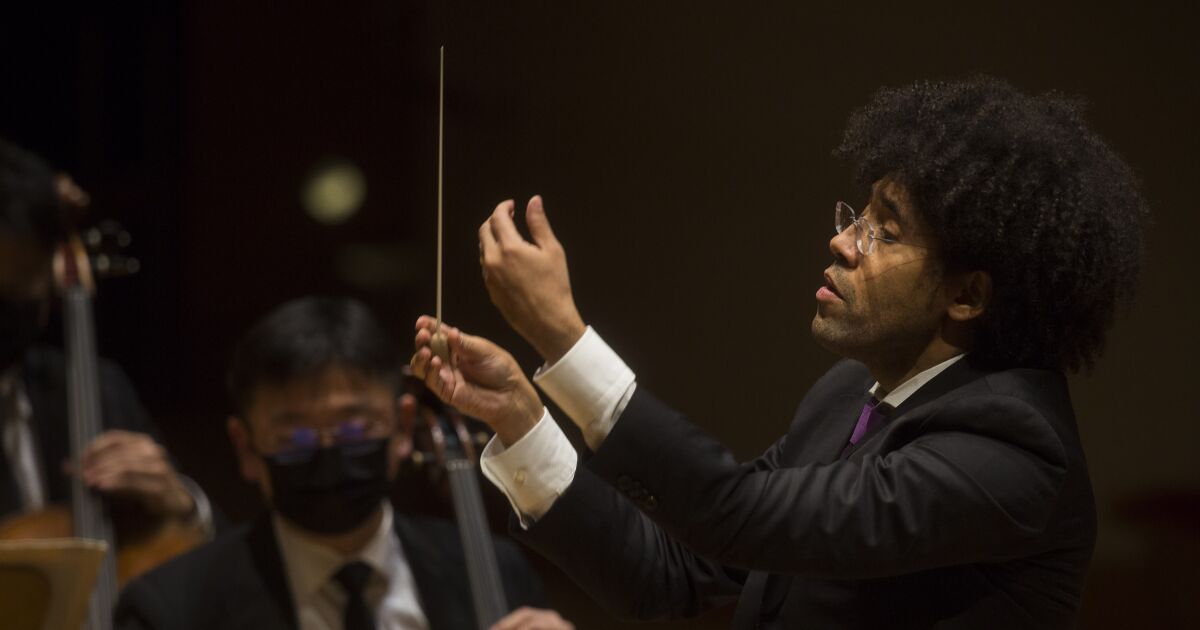 There were plenty of empty seats in the Segerstrom Concert Hall in Costa Mesa on Friday. The National Orchestra of Russia had canceled its American tour months ago, replaced that evening by the San Diego Symphony Orchestra.

Orange County patrons who attended were treated to a brilliant new trumpet concerto by Paquito D’Rivera and a thrilling retelling of Tchaikovsky’s Symphony No. 4, conducted by Music Director and Conductor Rafael Payare.

It would have been much easier to hear this program on Saturday at the San Diego Civic Theater, but it was worth the 2.5 hour drive north to hear the symphony in a world class venue.

The orchestra sang into Segerstrom’s acoustics in a way I’ve never heard in San Diego County venues. The upper strings were warm and lush, the cellos and basses firm and supportive. Woodwind solos arose and there was a new sparkle for the brass.

In Segerstrom, Payare could push the orchestra to play louder while maintaining clarity. At the other end, the quieter sounds had a little extra resonance. Their entire dynamic range seemed to expand.

Andrew Norman’s “Drip Blip Sparkle Spin Glint Glide Glow Float Flop Chop Pop Shatter Splash” opened the night with manic energy. The long title refers to 13 musical ideas which Norman calls “the choppy sounds of the orchestra” with which he “mixed them all together and called them one piece”.

Extremely different musical textures were quickly juxtaposed. This required precise ensemble work from Payare and the musicians. Several moments produced scattered laughs, such as giddy trombone glissandos or a dramatic Mahlerian hammer smash. It was an enjoyable four-minute musical rollercoaster.

Trumpeter Pacho Flores was the soloist for the evening. He performed a Trumpet Concerto in E flat major by Czech pre-classical composer Johann Neruda. Flores performed it on a modern corno da caccia, which looks like a small French horn but sounds like a mellow flugelhorn. His tone was surprisingly clear and his sentences were supported by imperceptible breathing. The slow movement took it to its highest register with beautifully played long lines.

D’Rivera, best known as a Cuban bebop saxophonist and clarinetist, composed a “Concerto Venezolano” for Flores. Flores is of Venezuelan descent (he and Payare were colleagues at El Sistema, Venezuela’s public music education program), and D’Rivera incorporated Venezuelan dance forms into this work – a danzon, a merengue (the genre Venezuelan in five times), and a joropo (a fast dance).

Flores possessed an unwavering solidity of tone and shifted comfortably between popular and classic playing styles. He was assisted by Hector Molina who strummed a cuatro (a Venezuelan instrument with four strings like a large ukulele) with virtuosity. Payare led the orchestra in an idiomatic rendition for the American premiere of this concerto.

I don’t remember hearing such a thrilling performance of a Tchaikovsky symphony in San Diego. Payare took advantage of the acoustics of the Segerstrom Concert Hall to carve outrageous crescendos from near-silence to the loudest possible, always with clarity. Its tempos, as I expected, were quick, especially in the third movement, but it all held together.

Plans were announced Wednesday for the renovation of Copley Symphony Hall. Friday’s concert made it clear that this is an orchestra worthy of a better-sounding venue. Hopefully the renovations will do the trick.

Hertzog is a freelance writer.