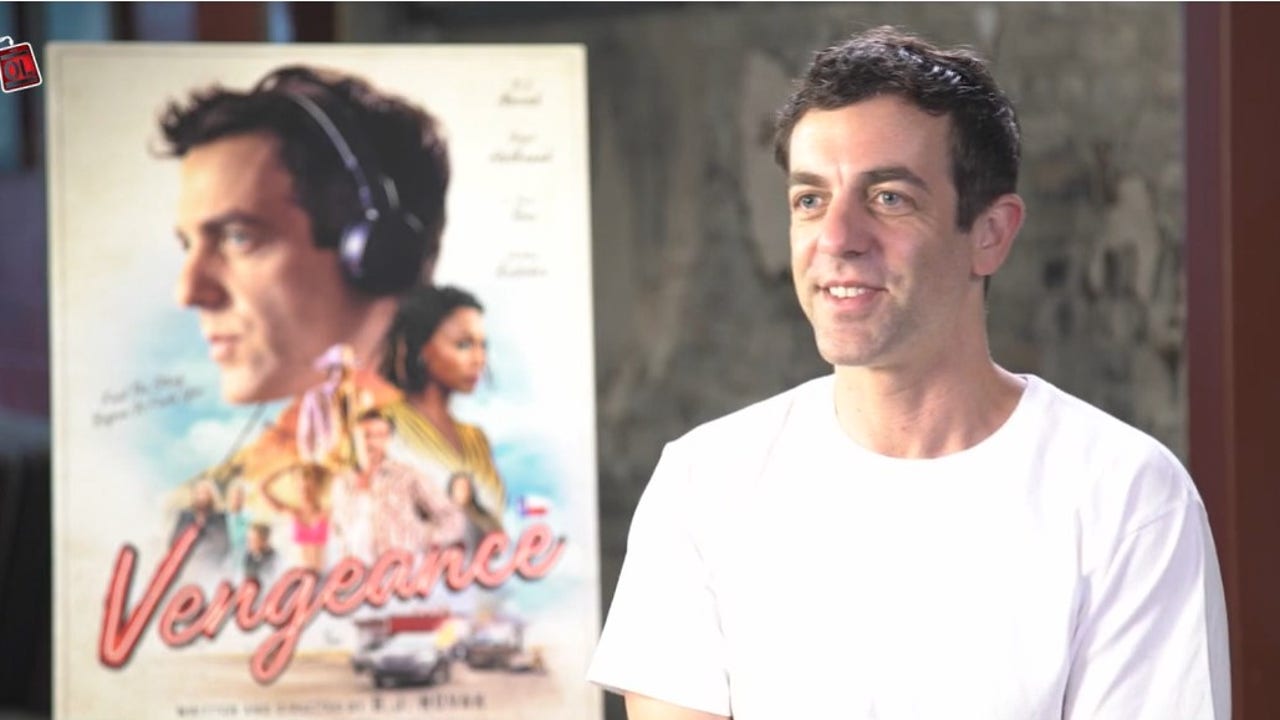 Backstage with BJ Novak on his film ‘Vengeance’

BJ Novak sits down with Dave Morales to talk about his directorial debut “Vengeance” and what it was like filming in Texas.

Released in theaters on July 29, “Vengeance” marks the directorial debut of BJ Novak. Starring Ashton Kutcher, Dove Cameron, Issa Rae and John Mayer. The veteran of “The Office” plays a New York journalist/podcaster who travels to Texas to investigate the death of a woman from his past.

Novak sat down with BackstageOL’s Dave Morales to discuss his directorial debut, what it was like filming in Texas and his thoughts on Whataburger.

Dave Morales: What inspired this story, where did it start for you?

BJ Novak: “It started with the idea that a superficial disconnected person (who I had too much in common with) but it turns out talking to people, a lot of people identify with that. You have people on your phone with different names that you don’t have I can’t totally remember, you text them all the time and you have a breakup and then you idealize them after the fact Kind of this phone culture where you can losing track of who’s important to you. The idea that a guy like that would get a call saying his girlfriend is dead, he’s no more surprised at his girlfriend than dead. expects him to avenge death, I thought if I could make this story realistic it would be really funny and also have a lot to explore in today’s era.

Morales: Tell me about the research you did because you got everything Texas in this movie?

Novak: “I really wanted to be welcome back to Texas after this movie. So to be here right now and premiering it at the Alamo Drafthouse in Austin last night was really a dream come true and a relief. I didn’t want to make a movie that anyone I felt bad about and created the office set in Scranton, Pa. Scranton has conventions for “The Office”, Scranton is so proud that the office is set up there and I really wanted to do that with everything I do. So I thought if I shot a movie in Texas, I need Texans to feel like, “Okay, this guy cares enough “. So I spent a lot of time traveling to figure out what city I wanted to shoot it in, what surprises me, and how I’m going to be treated like a guy who is so clearly an outsider in this world. And that was the thing. the most interesting part of my research was that it was an intimidating place to me, everything is bigger in texas, l The trucks, the guns and the people but the friendliness was something I had never encountered in my life before. between feeling like I’m in Texas it’s a creepy mythological place uh to a guy from Boston I was never treated like family on a leap of faith you know that paradox I thought that that’s really what my character learns that the heart sees the heart.

Morales: How did you understand the casting?

Novak: “I wanted it to be an eclectic cast, the same way the film is a mix of tones and there’s a surprising dynamic to the film. I thought the cast wouldn’t just be great actors, but actors that you wouldn’t expect to see together. So Ashton, I had actually worked with on ‘Punk’d’, that was my first job as an actor. So it had been over 10 years that I hadn’t worked with him, but I knew he was a guy who is really In real life, he’s an intellectual powerhouse who’s a mega TV producer and a tech guy, but everyone everyone knows it as ’70s Show’, ‘Dude Where’s My Car’ and I needed my character to be dizzy, to think he’s I’m gonna make fun of people or condescend and then realize oh god these people are smarter than me so i thought ashton was the perfect guy to flip the movie pa Because we all see it a certain way and it’s someone else. Dove Cameron just auditioned and I looked her up and I was like wait a second, 50 million drops on Instagram and ever since then every under 25 is the person they freak out about. But I sure thought that was an interesting piece of the puzzle and Issa Rae is you know such a high class HBO powerhouse and Luanne Stevens was on ‘Friday Night Lights’ so she had done the grandmother from Texas but we had to find a new way for her to do it so that all these people didn’t think they were going to go together, but that was the fun for me.”

Morales: Did you eat Whataburger?

Novak: “I think the burger is actually the least, I think what really sets Whataburger apart is the late night menu, the Dr. Pepper shake and the sauces. The sauces do it and the burger should do it. call it Whata-something-else maybe but I like it a lot and I like the feeling of this place.”

Morales: The relationship is also central to this story, is there any advice or dating advice that can be taken from this film? (Can you pick a date for this movie?)

Novak: “You could make a date and I think in a funny way I mean the movie starts with me and John Mayer in a rooftop bar thinking we’re the coolest guys in the world and sending texting all these people in our phones that we ask from like you know Emily Tinder and things like that I think you don’t have to be John Mayer to have a lot of people on your phone if you’re single These days. We all meet a ton of people we talk to them online and you don’t really know how deep your connection is, which is the misunderstanding that sets the plot in motion. So I think what my character learns and what anyone can learn from the movie if they learn anything about dating is you really have to be in the moment with someone you can’t not look at the photos after he left, whether it’s a death like in the movie or a breakup, you have to be in that moment.”

Morales: What surprised you in your role as director?

Novak: “You know, someone told me before I started that it was actually Al Ruddy who was producing ‘The Godfather’ and I met him and I said ‘Do you have any advice?’ And he said you only need to know two things to lead, what you want and how to get it I was like wow that’s awesome for everything in life by the way so I thought ok what i really need to do and what i really have to do The film learned that it’s a collective project Everyone needs to be inspired in the same way so you can’t just tell a cameraman to zoom in then you say “This is the moment I want to capture this” or the costume designer you don’t say “he’s in wranglers in this scene” you say “here’s a guy, call back You guys put some skinny jeans on him at first ’cause he ain’t fit yet”. Really getting everyone on the same page in a creative way is the most rewarding thing I’ve learned. in the making.”

Morales: How many times have you seen ‘Inglorious Bastards?

Novak: “I tend not to watch myself on screen, but I’ve seen myself constantly in ‘Inglorious Bastards’ giveaways because that last shot of me and Brad Pitt nodding became kind of a classic movie moment. , so I’ve seen too many times to count.”

This article originally appeared in BackstageOL.com

Cinema Chat: ‘Everything Everywhere All at Once’ Returns to Theaters, ‘Fire of Love’ Opens, and More