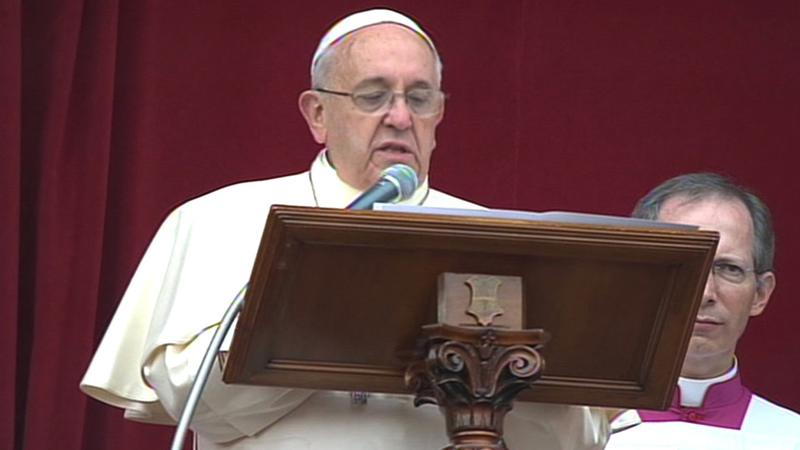 Pope Francis challenges the free market in his Easter message

This is an archived article and the information in the article may be out of date. Please look at the timestamp on the story to see when it was last updated.

Pope Francis was not as overt in calling the greedy in his 2014 Easter message as he was last year.

He focused primarily on calls for peace and an end to urgent conflicts in Syria, Ukraine and elsewhere. But even this year he has woven some commentary on the global economy.

“Help us overcome the scourge of hunger, aggravated by conflict and by the immense waste for which we are often responsible,” he said. He went on to mention diseases like Ebola that are “spread by neglect and extreme poverty”.

Pope Francis stunned the world last Easter when he broke with the usual traditions of Holy Week.

He washed the feet of women and two Muslims and delivered an Easter Day message calling not just for the usual world peace, but “peace all over the world, still divided by greed in search of a easy gain”.

At the time, Francis was just weeks into his term as head of the Catholic Church, but these were the first signs of what became a central theme of his papacy: the fight against inequality. .

He doesn’t just call on people to help the poor, he often challenges the current global economic order.

He spoke out against the evils of “slavery to profit at all costs” and the “scandal of poverty”.

In a speech on January 1, Francis called “access to capital” a human right as fundamental as education and health.

The papal emphasis on finance has led some to call it “Vatican economics”, “Franciscanomy”, or simply the economic doctrine of Pope Francis.

Francis clearly sees huge flaws in the system that mainly benefit those at the top of the ladder of wealth and power.

What is unclear is whether the pope is a capitalist, a socialist or something in between.

“I don’t think he sees himself as a capitalist,” says Dr. Alejandro Chafuen, a Catholic scholar and president of the Atlas Network. “The Pope does not see himself in the camp of those who run the world economy.”

In November, shortly before Francis was named Time Magazine’s Person of the Year, the pope delivered arguably his most impactful speech on economics to date.

It had sections entitled “No to an exclusionary economy”, “No to the new idolatry of money” and “No to the financial system which rules rather than serves”.

“We created new idols. The cult of the ancient golden calf has returned in a new and ruthless form in the idolatry of money and the dictatorship of an impersonal economy devoid of truly human purpose,” the pope wrote.

He went on to criticize the way the current system has shifted the focus from people to things.

“The global crisis affecting finance and the economy exposes their imbalances and above all their lack of real concern for human beings; man is reduced to just one of his needs: consumption,” says François.

It is important to view Pope Francis as a product of Peronist Argentina, argues Chafuen. While Francis held various positions in Buenos Aires, he witnessed government corruption that prevented much of the country from prospering.

Chafuen thinks the pope supports a “third way,” something between the free market and Marxism.

But many observers of the pope see more of a capitalist in Francis.

“It just calls for a market economy that does a better job of enabling everyone to participate,” says Gerald Beyer, associate professor of theology and religious studies at Villanova University.

Beyer thinks Francis is continuing the message of his predecessors, Pope John Paul II and Pope Benedict, who were clear that the market economy is better than socialism in helping to promote human well-being, even if they sometimes criticized her.

A big part of Francis’ appeal is that he lives his message in many ways. He doesn’t just verbally challenge greed and excess, he chooses to live a simple life, including choosing not to live in the Vatican Palace.

In a global economy still trying to get back on track after a major recession, the Pope’s message and actions resonate inside and outside the Church.

As the pope concludes the most important week of the Christian calendar, he calls the gods of the free market to a higher power.