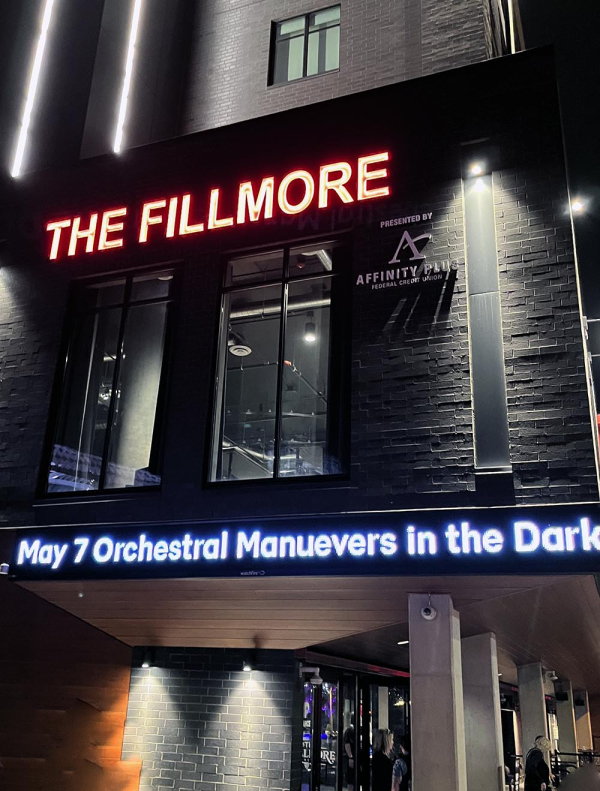 english group Orchestral maneuvers in the dark (or commonly called MDGs) is currently enjoying their 40th anniversary tour. Technically, it’s their 43rd anniversary, as the COVID pandemic has delayed their tour until now. The band stopped by the Fillmore in Minneapolis on Saturday, May 7.

Group “Family Affair” In the valley below opened the show. We previously saw them at the Alamo Drafthouse in April 2019 and wrote, “Married couple Angela Gail and Jeffrey Jacob make up the innovative band, which played for just over an hour under dim red lights in a corner front of the cinema, singing face-to-face straight into the wireless headphones everyone in the theater wore for a sensory experience like few others, something from a start pink floyd could have done, when they were known as The Pink Floyd.”

Of the four songs we heard, they all sounded really good…my favorite being “Hold On Tight”. Unfortunately, the band had to cut their set short because Jeffrey Jacob was having problems with his guitar amp. Angela Gail joked that the ghost in the machine is probably Prince watch over them. As two other tech engineers took to the stage to figure things out, Gail introduced their next song “Lie With Me” (which they didn’t get a chance to play), telling us the song is about “l he story of how Jeff and I fell in love in Austin. They had a love child called Griffin (?), who was also traveling with them on this tour.

MDGs (singer/bassist Andy McCluskey, keyboards/vocals Paul Humphreys, bass/sax/various Martin Cooper and drummer Stuart Kershaw) were looking forward to celebrating their 40th anniversary. It’s basically a greatest hits tour, and they even confessed that their set consisted of songs they just wanted to play… which meant there were “deep cuts”, like sides B like “Almost”. “Almost” is an important song, because it was one of the songs that inspired a young Vince Clarke to start his band Depeche Mode.

The last time the band was in town was at First Avenue in March 2018…but that show took many years to arrive. It was a catch-up date, as their drummer Stuart Kershaw, had a heart attack (quote “he tried to die”) which forced the cancellation of their entire 2013 tour. is being produced, as the band tried to hold their 40th anniversary in 2019/2020, but this has been postponed until now.

After two “new” songs, singer Andy McCluskey puts on his bass guitar. “I have my bass guitar, do you know what that means?” as McCluskey asks Paul Humphreys. He replied, “We’re going to play old songs.”

Without a beat, McCluskey asks, “You brought your dancing shoes, didn’t you?” to the public. With that, they embarked on “Isotype”.

After the song, McCluskey, feeling extremely talkative, answered someone’s question on his bass guitar. Apparently, when he was younger, he couldn’t afford a “straight bass”, so he bought a cheaper left-handed one. He basically had to play it backwards. That’s the kind of information you wouldn’t know unless you went to a live broadcast and heard that kind of chatter.

Of course, the band held onto their biggest hit song(s) until the encore, starting with “If You Leave.” They joked that they weren’t going to play it at first. “We already played that one for John Hughes,” they said. They’re referring to the Hughes movie Pretty in pink, which required a different song at the end of the film. Hughes asked the band to write a new song, and just two days before OMD’s tour started, they quickly wrote and recorded “If You Leave” for Hughes. As history would have it, the song was a hit and became one of OMD’s signature songs.

Then they performed “Secrets”, which was a big hit for them. They said they actually had to release this single, so they could promote another song.

Finally, they ended their encore with the first single, 1979’s “Electricity.” Technically, the song wasn’t actually OMD, it was written under the band identity (which had McCluskey and Humphreys in the band)…but by then the band had broken up. They ended up re-recording the song and releasing it on Factory Records.

The song was an important part of the story. Mojo recognized the song as “the dawn of British synth-pop”, and it inspired many other musicians to start their own bands or copy that sound. Indeed, after hearing “Electricity”, Steve Lamacq decides to become a DJ.

OMD is currently on tour for its 40th anniversary. The band is playing at Truman, Kansas City tonight. The band asked the public to accompany them to Kansas City, even offering free admission if you had a ticket stub from tonight. We don’t know if McCluskey was joking, but the last thing he said, as he left the stage, gesturing to the fans in front, “We’ll see you in Kansas City!”