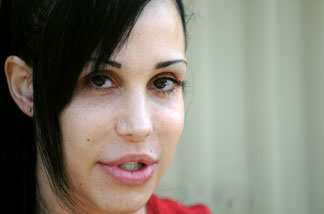 A judge has rejected the bankruptcy petition of Nadya Suleman, the La Habra woman better known as Octomom, meaning she is still required to sell her house and pay off her huge debts.

Suleman failed to file the proper paperwork, the bankruptcy court judge said yesterday, according to the Orange County Register.

It means creditors can move in to collect what they say is owed to them, and a pending foreclosure can go ahead against the house Suleman lives in with his children – all 14 of them. The house was due to go up for auction last month, but the auction was delayed pending a decision on Suleman’s bankruptcy filing.

She also agreed to take pay-per-minute phone calls with other D-list celebrities and reality TV personalities.

Suleman’s case was thrown out because she failed to file a dozen financial documents and statements needed to prove bankruptcy. In her initial April 30 filing, she estimated she owed up to $1million that she is unable to repay – and sought protection from her debts under Chapter 7 bankruptcy. .

According to the filing, she owed money to more than 20 parties, including utility companies, her father and a Christian school.