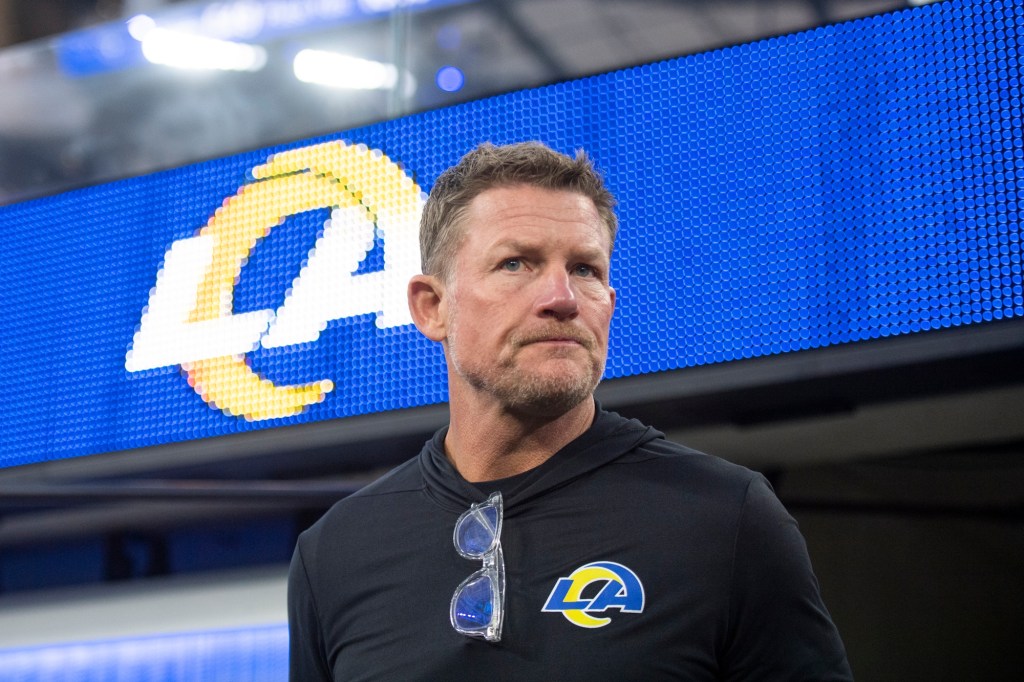 Rams coach Sean McVay and general manager Les Snead were talking with reporters near the end of the first round of the NFL Draft on Thursday when the final pick appeared on a screen across the room.

“Cole Strange just went!” McVay exclaimed when the guard/center from a second-tier school in Tennessee was taken by the New England Patriots with the 29th pick.

“Oh my! UT Chattanooga in the first round!” Snead said.

” And that ? McVay said. “And to think we wasted our time watching it, thinking it would be (available) at (choose number) 104.”

So went the first night of the NFL Draft for the Rams, who had no first-round pick for the sixth straight draft and weren’t expected to make a selection until the 104th, near the end of the third round on Friday. .

Coaches, executives and staff socialized at the Rams’ headquarters in the Hollywood Hills, with a view of Los Angeles at their feet.

With the exception of the Pats grabbing Strange earlier than expected, the other teams’ decisions on Thursday had little effect on the Rams’ plans for their projected eight picks in Rounds 3-7.

“I think we have time to sort things out,” McVay said.

Snead and McVay said they would start paying close attention in round three. That’s when it might become clear if any teams want to trade two or three lower-round picks for the Rams’ lone third-round pick. If the Rams don’t trade, they won’t enter the draft until the final day Saturday.

Then we’ll see if the Rams start drafting to add punch to their offense, like they usually do, or to increase the depth of their defense. It could come down to the prospects that are still available. Strange things – or even strange things – could happen.

A year ago, the Rams had to start by strengthening the defense, which had said goodbye to several leaders there, unless they choose an offensive lineman, to compensate for the loss of a starting center .

Naturally, they did neither with their first pick, instead picking a stranded wide receiver, Tutu Atwell, in the second round with the 57th overall pick, then focused on defensive prospects without never approach the offensive line.

This time, cases can be made to prioritize the offensive line, after the departures of starting left tackle Andrew Whitworth and right guard Austin Corbett, or the defense, now minus outside linebacker Von Miller and cornerback Darious Williams.

Earlier in the week, McVay called the pass rush “a big thing,” as the Rams showed by sacking Joe Burrow of the Cincinnati Bengals a Super Bowl-record seven times.

“But there are definitely needs that we have on both sides of football,” McVay said on Tuesday. “There are a lot of players we’ve identified who we think will be there at 104, 142, and some of our other picks who we think can help this team.”

If the Rams make big offensive line choices, it won’t be to immediately replace Whitworth, who retired, or Corbett, who signed with the Carolina Panthers. They re-signed Joe Noteboom to replace Whitworth. Coleman Shelton, Tremayne Anchrum and Bobby Evans are up for custody.

“I think we have guys that we’ve invested in that we think have a huge upside that we can’t wait to see compete,” McVay said Tuesday. “But those are still important positions to develop depth because you’ll probably have to rely on them at some point in the season to be able to win key and critical games.”

Since 2017, when the offensive-focused McVay became head coach and the Rams began their first-round pick trading streak, they’ve used their first pick on an offensive player for four out of five years. getting tight end Gerald Everett (third round, 2017), tackle Joe Noteboom (third, 2018), running back Cam Akers (second, 2020) and Atwell.

But it’s not just a McVay affair. The first five years after Snead became general manager in 2012, the Rams’ first pick has also been on offense four times, with first-round picks including running back Todd Gurley (2015) and quarterback Jared Goff ( 2016).

The Rams love versatile offensive linemen, which is why they might have been attracted to Cole Strange, a college guard whose future in the NFL could be at the center.

“The next few days are going to be exciting for sure,” McVay said Thursday. “But there are a lot of guys we like, and we’re going to find players who are going to help us this year.”

The Rams have eight NFL draft picks. Round one was Thursday, rounds two and three are Friday, and rounds 4-7 are Saturday.

1st round: No choice

2nd round: No choice