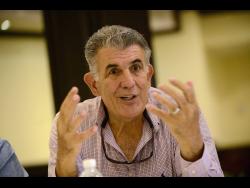 Regional rating agency CariCRIS downgraded adventure park Mystic Mountain Limited after the company failed to pay interest on its $8 million debt which became due in September 2020.

It comes amid nine months of negotiations between the company and its creditors over a proposal to delay payments on its seven-year bond. These negotiations are continuing even as another payment for December becomes due.

The default or ‘D’ rating is just the latest sign of growing strains on the company, which in recent months has tried to claw back business from locals and tourists to make up for losses suffered under the pandemic.

In June, CariCRIS downgraded Mystic Mountain’s creditworthiness to low due to the company’s failure to meet its obligation to maintain a certain balance in its debt service reserve account equivalent to six months of interest payments. .

Prior to that, Drakulich had turned to bondholders seeking a six-month to one-year waiver on its debt service payments. He had hoped to avoid the current fallout by alerting bondholders early that the company was in a precarious position and needed a reprieve.

The main holders of the Mystic Mountain bond are pension funds, and discussions began as early as March when the company realized it was having difficulty completing construction of a new area of ​​its base park. in Ocho Rios called Reggae Ridge.

The park’s situation has been further complicated by the coronavirus, which was detected in Jamaica in early March, and brought the economy to a halt.

Drakulich told the financial gleaner that he was expecting a response in September, but this was delayed when he and other shareholders engaged in a legal battle to prevent majority shareholder Rainforest Adventures (Holdings) Limited, or RFA, a registered company in the British Virgin Islands, to constitute the board of directors -level changes at MML, including the addition of new directors and the appointment of a new chief executive officer.

The partial principal repayment of the Mystic Mountain bond, which Drakulich also hoped to get a two-year reprieve, matures at the end of the month, alongside another coupon payment.

The Mystic Mountain CEO, who said his case with RFA is still in court, with another appearance scheduled for the week of January 24, did not comment on the payments. The seven-year bond issued in 2018 pays interest at 7.25% per annum.

Drakulich said talks with the bondholders should resume once the court case is settled.

CariCRIS is also awaiting the outcome of negotiations to determine other rating metrics.

“We note Mystic Mountain Limited’s recent meetings with its bondholders, which we consider to be credit positive under the circumstances and await the outcome of the upcoming payments due on this debt and the resulting debt restructuring agreements.” said CariCRIS in a statement on the new rating issued. December 11.