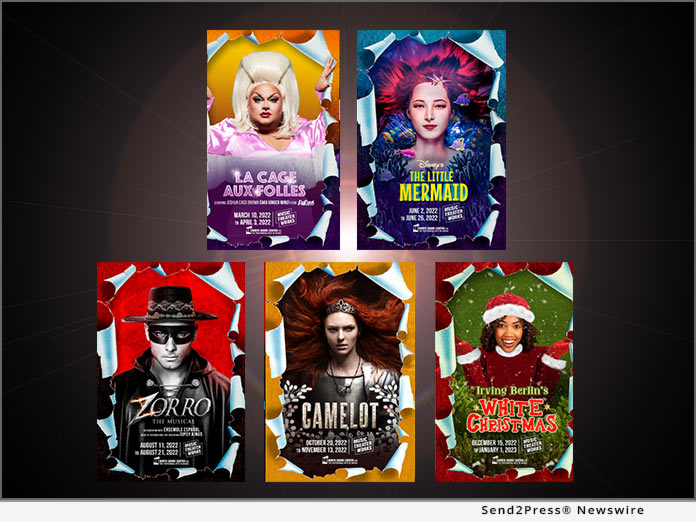 A word from Production Artistic Director Kyle A. Dougan: “Our 2022 season will get us back on track with expanded programming and more challenging artistic endeavors to bring ‘Great Music’ and ‘Great Theatre’ to our audiences. I look forward to sharing our exciting season with our community.

Winner of six Tony Awards, including Best Musical, Best Score, Best Book and, recently, Best Cover of a Musical, “La Cage Aux Folles” is an evening full of laughter! Based on the hit French farce that also inspired Hollywood’s The Birdcage, this Broadway hit has a hilarious book by Harvey Fierstein and a score by the king of show tunes, Jerry Herman (Hello, Dolly! and Mame).

We will transform the theater into the elegant Saint-Tropez de La Cage nightclub with a bar on stage and surprises at every turn. And when future in-laws from a non-traditional family come to visit, the truth comes out in the craziest way!

Featuring RuPaul’s Drag Race headliner Joshua Eads Brown (aka Ginger Minj), and featuring costumes by Project Runway designer Justin LeBlanc, this is one event not to be missed!

Based on one of Hans Christian Andersen’s most beloved stories and the classic Disney animated film, “Disney’s The Little Mermaid” is a beautiful, classic love story for the whole family. With music by eight-time Oscar winner Alan Menken, lyrics by Howard Ashman and Glenn Slater, and a captivating book by Doug Wright, this Broadway gem will capture your heart with its irresistible favorite songs, including “Under the Sea”, “Kiss the girl” and “Part of Your World”.

From the moment you enter the theater, this immersive production will make you feel part of Ariel’s world. When she disobeys her father, King Triton, and makes a deal with the wicked witch Ursula, Ariel thinks her dreams have come true. But when the market isn’t what it seems, Ariel needs the help of her colorful friends Flounder the fish, Scuttle the seagull and Sebastian the crab to rescue her true love and restore order under the sea. .

Get ready for extraordinary aerial acrobatics, spectacular sword fighting and incredible magic in the theater as Music Theater Works tells the story of the legendary swordsman and defender of justice in “Zorro: The Musical”.

Zorro has captured the imagination of millions for over a century, in books, movies, and television. He now takes the stage in an original and exciting musical. Don Diego de la Vega, a wealthy caballero, leads a double life as a masked hero entangled in adventure and romance, struggling to protect his people from tyranny and to win the love of the beautiful Luisa.

Join us as we tell the enduring legend of King Arthur, Guinevere, Lancelot and the Knights of the Round Table in Lerner and Loewe’s “Camelot.” Based on TH White’s novel “The Once and Future King,” this four-time Tony Award-winning Broadway classic is filled with chivalry, passion, pageantry and betrayal.

Music Theater Works brings this medieval love triangle to the theatrical stage with a remarkable cast and a beloved score that includes timeless songs such as “If Ever I Would Leave You”, “Camelot”, “C’est Moi” and ” How to Handle a Woman”.

Follow King Arthur’s most trusted knight, Sir Lancelot, falls in love with the beautiful Queen Guinevere, and together they indulge their passion. Will this betrayal destroy Camelot and all it stands for? This intimate new production promises to give “Camelot” a new and thrilling life!

Music Theater Works will present “Irving Berlin’s White Christmas” at the North Shore Center For The Performing Arts In Skokie (9501 Skokie Blvd, Skokie, IL 60076) at the Center Theater from December 15, 2022 through January 1, 2023.

Based on the heartwarming classic movie, “Irving Berlin’s White Christmas” is a holiday favorite for the whole family. Featuring a sparkling new book by David Ives and Paul Blake, the musical delight includes classic Berlin songs such as ‘Blue Skies’, ‘I Love a Piano’, ‘How Deep is the Ocean’ and of course the perennial favorite of holiday, “White Christmas.”

“Irving Berlin’s White Christmas” follows World War II veterans Bob Wallace and Phil Davis, who have a hit song and dance number. They follow a duo of beautiful singing sisters on their way to a Christmas pageant and end up at the inn in Vermont owned by their former army commander, General Waverly.

When Bob and Phil discover that the General’s Inn is having a hard time, they decide to put on a big show to attract business. But will romance and misunderstandings stop the performance? Join us this holiday season when this classic Christmas story unfolds with unforgettable songs and joyful dancing!

ALL GUESTS will be required to wear a face mask regardless of their vaccination status and present photo ID with proof of full COVID-19 vaccination with an approved vaccine.

Music Theater Works is a non-profit professional theater company based in Wilmette, Illinois, providing a colorful repertoire including operetta, Golden Age of Broadway, The Great American Songbook and modern classics since 1980 .

Since 2021, Music Theater Works has become a resident theater company at the North Shore Center For The Performing Arts In Skokie (9501 Skokie Blvd, Skokie, IL 60076).

10 Ways You Can Support Movie Theaters So They Can Stay