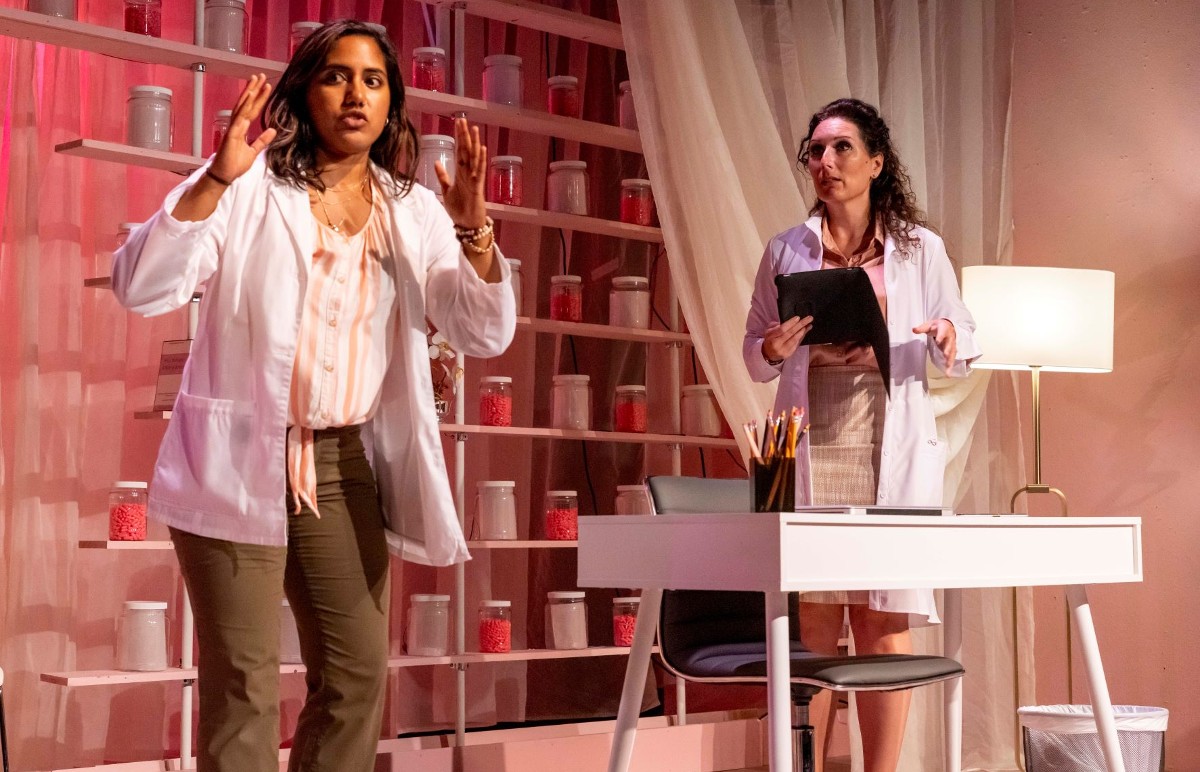 More than 50 years have passed since the initial publication of “Our Bodies, Ourselves,” a collection of feminist writing suggesting that women are taking matters into their own hands, so to speak, and exploring our sexuality. It has been translated into 33 languages. Four million copies were sold.

But times have changed.

Nowadays, everyone is looking for a pharmaceutical remedy for all our ailments. Viagra and its cousins ​​have been around for a long time. Men’s pleasure and sexual satisfaction have always trumped women’s (those “enhancement” drugs are even covered by insurance, while abortion, for example…well, you know that.)

Now comes the Austin, Texas-based playwright Sarah Saltwick and his new play, “The Pleasure Trials,” newly revised since its premiere in Austin six months ago.

Set primarily in a research lab, it follows two women who begin phase I trials of a new pill that will increase female libido.

Volunteers – mostly straight, single and married, of varying ages – line up. The problem is that this is a double-blind study, so half of the experimental subjects will be given a placebo, and no one knows which half is which.

Given the very encouraging preliminary results, is it entirely due to the drug – or is there a placebo effect?

While this all sounds potentially sexy and titillating (and there’s a part of it), there’s also plenty of T&M (trivia and minutiae), which reminded me why, despite having been in the middle academic for years, I never wanted to go into researching.

So many technical details and waiting. What’s not so much is humor, although the play is presented as a comedy. At least not in the matinee I attended. There are, however, exaggerated moments.

Marti Gobel directs three deft actors: Sarah Alida LeClair as divorced, work-obsessed, frosty lead researcher Dr. Rachel Milan; Sutheshna (Suthe) Mani as her bright-eyed, bushy-tailed (and frustrated by her boyfriend) assistant Callie Young who, since coming up with the idea for FDDD (Female Desire Deficit Disorder) in his thesis, aspires to more credit and respect; and Andréa Agosto as all subjects, A (Anne) to Z (Zora), employing a variety of wigs, costumes and (sometimes fluctuating) accents.

Presumably, this choice of actor was part of the play’s intended structure: a performer portraying an array of ecstatic, angry, impatient and complaining guinea pigs, but it puts pressure on the audience to remember who. is who when he comes back and gets more involved. with researchers.

Sharon Taylor, expert cellist and sound designer, introduces, punctuates and underlines it all. She sits on stage and plays mostly classical tunes, but also seems to improvise at times – and add a bit of Beatles when it suits her.

The stage design (Yi-Chien Lee) is lovely, all pink and feminine with draped white sheer curtains, and rows and rows of shelf pots filled with pink, white, or green substances that light up seemingly at random (design whimsical lighting from Sierra Shreves). Suits (Regan A. McKay) change frequently for Agosto and also make a clear hierarchical distinction between long (upper echelon) and short (underling) lab coats.

At two o’clock, the piece feels long, though the dialogue is often kicked off at a breakneck pace. A few more rewrites, and more humor, are in order. Cut, yes, but also leave no details (which has been the “secret added ingredient” of the boss?).

Saltwick is onto something, that’s for sure. Her piece offers a lot of food for thought, especially what women want versus what the market/sponsors/advertisers think women need. The article asks the following question: if female libidos were significantly altered, would this alter the dynamics of relationships, marriage, or monogamy? Would more – or fewer – people fight for gender equality?

Some of these provocative questions are really no joke.

Pat Launer, member of the American Association of Theater Critics, is a longtime San Diego arts writer and Emmy-winning theater critic. An archive of his previews and reviews can be found at patlauner.com.