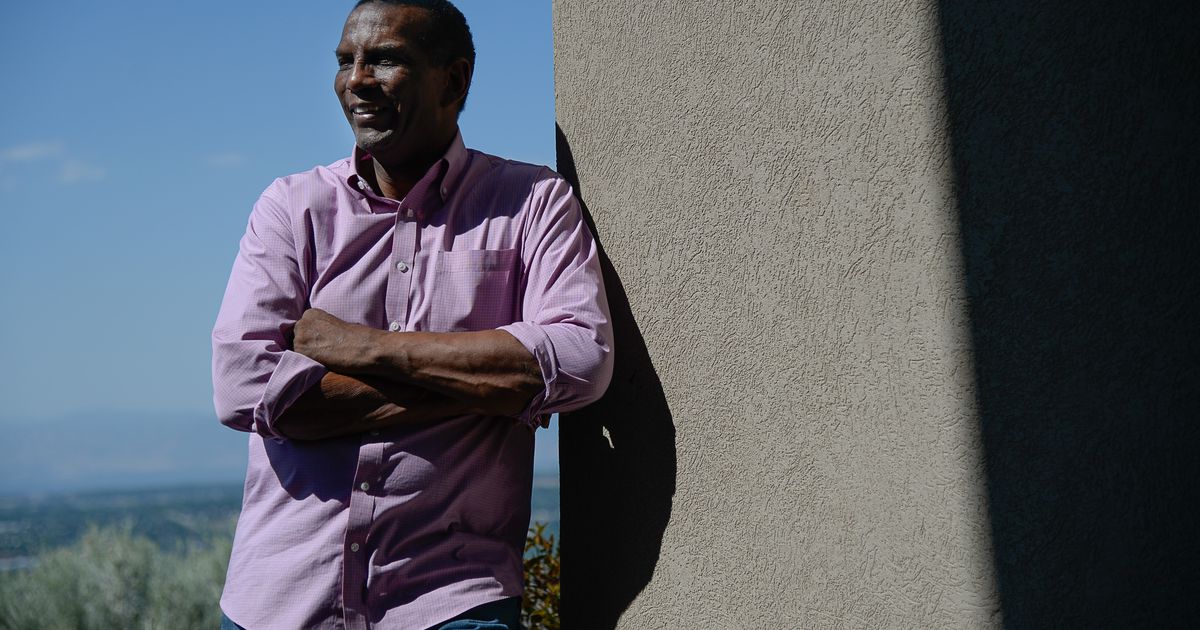 Washington • Burgess Owens’ conversion to the Republican Party came after he had played professional football for a decade, watched the rise of Ronald Reagan and aspired to start his own business.

“I’ve always been a conservative, and that’s what I realized,” says Owens. “I grew up conservative, but I voted as a Democrat because we talked [about how] it was the party in our favour.

He left the NFL as an “arrogant liberal,” but years later, he says, “I found myself a very humble and grateful conservative.”

Owens, 68, is now the Republican nominee in Utah’s 4th congressional district after beating three primary contenders last week. He hopes to unseat Rep. Ben McAdams, a freshman Democrat, in the November election. This race is expected to be one of the most competitive in the country. And it pits McAdams, who has long been involved in Utah politics, against Burgess, who is new to the campaign.

Owens, born in Ohio and raised in Florida, says his life was shaped by being a black man growing up in the Deep South – how his father’s ambition to overcome obstacles helped shape his character. And how he believes a strong work ethic and conservative policies are more effective than government handouts that haven’t helped people like him.

“I happen to be attracted to a party that believes in freedom – No. 1,” says Burgess, “and believes that each of us can be successful if we pay the price.

“So we find right now, more black americans are leaving the democrat plantation, literally,” Burgess adds. “I have never seen anything like this because of the president [Donald] Trump, because the success he gave to the black community, the lowest unemployment rate in the history of our country, for blacks, Hispanics, Asians, women, veterans.

Of course it was before the coronavirus pandemic hit and crashed employment numbers for every category.

Owens is a die-hard Trump supporter — he donned a red Make America Great Again cap at a Blue Lives Matter protest on June 20 — because he says the president is “getting the job done.”

“I support anyone, any president who will fight for the American way,” Owens said. “And by the way, I have no problem with his tweets. … I look at it very simply. If the tweets make the nuts awkward, that makes me happy.

And he received Trump’s endorsement on Friday in one of those tweets. Trump wrote, “A Super Bowl champion, Burgess knows how to WIN.”

In response, Burgess tweeted, “From a childhood in isolation to the President’s endorsement. It is an honor to live in a country that has made this possible.

It is an honor to have the support of the President of the United States. From a childhood in segregation to the approval of the president. It is an honor to live in a country that has made this possible. Thanks @realDonaldTrump https://t.co/XU7V6pn1av

Owens says his campaign will focus on prioritizing “God, country, family first,” and he has choice words for Democratic leaders, who he says have gone so far left that they are Marxists and Socialists.

“It will come down to a very simple decision this time in 2020,” Owens said. “Are we keeping our country, our culture, our way of life? A state of law, of security? Or do you follow the path we now see on the streets of inner cities: chaos, destruction, damage, death, intimidation.

The GOP nominee, who still sports his Super Bowl championship ring, has come a long way from his Southern roots to find his home in the GOP, The Church of Jesus Christ of Latter-day Saints and Utah.

From the NFL to WordPerfect

Owens was born in Columbus, Ohio, where his father had moved to get a graduate degree he couldn’t get in Texas because of Jim Crow laws at the time. The family later moved to Tallahassee, Florida, where her father was a college professor.

Owens, who spent time in university labs during the summers, eventually sought a degree in biology at the University of Miami, where he was only the third black student to earn a scholarship. Playing football was an added bonus, he says, but education was first.

Football, however, became a livelihood after Owens was drafted by the New York Jets in the first round of the 1973 NFL Draft. A safety, he played 10 seasons, including as part of the 1980 Super Bowl-winning Oakland Raiders team.

Towards the end of his professional career, Owens said he converted to The Church of Jesus Christ of Latter-day Saints because of some teammates who shared the faith.

Playing pro didn’t bring him as much money as he had hoped, and a business he started with his brother selling electronic gadgets to track business expenses failed, causing his first bankruptcy.

He then moved with his children to a one-bedroom apartment in Brooklyn, NY, and worked as a chimney sweep during the day and as a security guard at night.

“It was a very humbling moment,” says Owens. “It was also a very key moment in my life that at the end of the long day, standing in the basement apartment, looking outside and just thinking that I knew that was not how it was. end because I believe in the American promise of second chances.

Soon after, a friend told Owens about a job at WordPerfect, then a fast-growing computer software company based in Utah. The sales job was in Philadelphia, and Owens moved.

But he had a fondness for Utah.

“I made a promise to all my children that [they] could watch any college across the country as long as they spend their freshman year in Utah,” Owens says, “because I wanted them to have a good soft landing.

Owens has also written a few books, including “Liberalism or How to Turn Good Men into Whiners, Weenies and Wimps”, and his most recent, “Why I Stand: From Freedom to the Killing Fields of Socialism”.

Documents filed with the House show Owens receives a salary of $70,000 a year from his foundation as well as income from his books and speaking engagements. A December filing showed Owens up to $5 million owed to the IRS but it was changed to $6,500 in an addendum released in January. Owens says the original filing was a “big mistake” and most of the IRS debt is now paid off.

Owens’ rhetoric matches the books, and he’s not afraid of the threat he sees from Democrats. He says Americans must do what they can to “reclaim our country” from the left.

Let’s go to the general

“I heard he was a really nice guy,” Owens says. “And I don’t doubt it. But it’s not about Ben McAdams. This is the party it empowers.

In contrast, the Democratic Congressional Campaign Committee notes Owens’ support for Trump, his plan to jettison the Department of Education and his opposition to Affordable Care Act protections for pre-existing conditions. The DCCC also notes that while McAdams fought against the resumption of nuclear weapons testing in the West, Owens expressed his support.

“His non-mainstream agenda is not suitable for moderate voters in Utah,” the DCCC said in a memo after Owens’ primary victory.

Owens says he can win by focusing on “God, country, family first” — things he says all 4th District voters believe in.

“It all depends on what I really stand for,” he said. “It’s something that resonates with Republicans, independents and Democrats who are taking the time to listen to it and think about their future.”