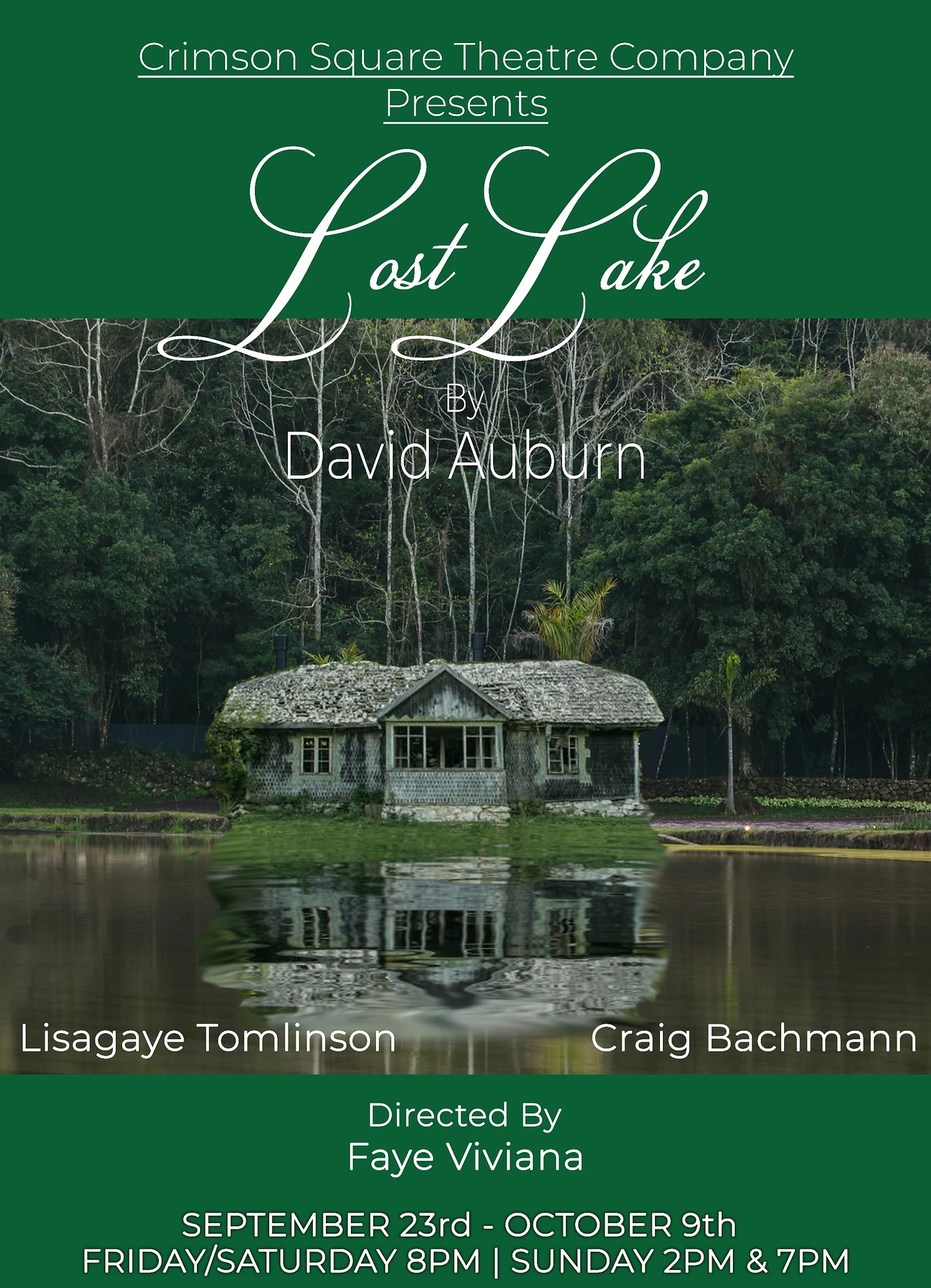 by David Auburn lost lake is a tense, carefully crafted drama about the surprising and complicated friendship formed by two very different people with no one else to turn to.

The lakeside rental Veronica has managed to afford is a far cry from the idyllic getaway she and her kids desperately need, and disheveled owner Hogan has his own issues. Problems that Veronica is inevitably and irrevocably drawn into. A gripping and revealing portrait of two strangers bound together by circumstance, Lost Lake is a living piece about the struggle for connection in an imperfect world.

LISAGAYE TOMLINSONVeronica
Lisagaye is a Jamaican-born actress, musician, songwriter and writer who is excited to be making her Crimson Square debut in LOST LAKE. She began her stage career in South Florida as Dionne in a Caldwell Theater production of HAIR and later played Erzulie in ONCE ON THIS ISLAND. Locally, she starred in the Hollywood Fringe Festival production of FIFTY SHADES OF MURASS and received outstanding reviews for playing several supporting roles in Firescape Theater and Yolk Productions’ revival of David Henry Hwang YELLOW FACE, in association with the Beverly Hills Playhouse. Recent film and TV credits include HOME ECONOMY, PARALYSIShis first horror feature and the delightful comedy short MELON. Music has always played a vital role in her life and she is deeply inspired by her mother who sang every day in their family home. Lisagaye is a proud volunteer with the Los Angeles Radio Reading Service and the Hollywood Food Coalition.

CRAIG BACHMANNHogan
Craig graduated from Carnegie Mellon University with a BFA in Directing. He started his career as a PA and was once Russell Crow’s assistant which eventually inspired him to act. He then studied at HB Studios with Laura Esterman and Austin Pendleton before attending the University of Washington for his master’s degree in theater. He then returned to New York where he began performing professionally on stage, screen and television. Several years later he moved to Los Angeles and studied improv at IO West and The Groundlings, performing on numerous crews. Some of Craig’s Theater credits include; Piece of cakee (New York Post Comic pick of the Week), Chekhov’s Rifle (World Premiere), Too Much Water (World Premiere), boy gets girl, Crazy in Loveand Cabaret. His film credits include Dad, Singularity, The Last Days of Flanelle Daphneand The transplant. He also appeared on guiding light, 4400, and a variety of advertisements. Craig is thrilled to work with Crimson Square and is honored to be surrounded by such talented artists. He would like to dedicate his performance to his late agent and friend Anthony Schiano whose hard work got Craig moving to Los Angeles. RIP Anthony, “Thank you for making me look good”

DAVID AUBURN (Playwright)
David Auburn is an American playwright, screenwriter and director. He is best known for his 2000 play Evidence, which won the 2001 Tony Award for Best Play and the Pulitzer Prize for Drama. He also wrote the screenplays for the 2005 film version of Evidence, The lake house (2006), The girl in the park (2007), and georgetown (2019).

FAYE VIVIANA (Director)
Faye Viviana is an award-winning actress and filmmaker, and is thrilled to be making her directorial debut at the LA Theater. Her professional ballet career with American Ballet Theater interrupted by injury in 2007, she turned to theater and film. She has starred in many roles on television, including LONGMIRE (Netflix), TO CRUSH (SCS) and ASSISTANT (FOX) to name a few, and many independent films. After working as an independent film producer for several years, she launched her own business by founding V3 Productions in 2019. She is also the executive producer of Crimson Square Theater Company, having produced I am my own wife, Dinner with friends, Rooster, Sex with strangers, The how and the whyand Living in the purple living room to much critical acclaim. She’s passionate about all facets of storytelling, exploring the human condition, and has a pretty serious addiction to books and gummy bears. You can find her on social media as @FyVivi

DERRICK McDANIEL (lighting designer)
Derrick McDaniel has worked in live theater for over 25 years, both in Los Angeles and New York. From Romeo and Juliet to Guys and Dolls, Derrick has designed the lighting for numerous plays, musicals, and corporate and private events. A few of his lighting credits include “Mercy Seat” (2012 LA Weekly Awards winner) at Inside the Ford Theatre, spring awakening at the Malibu Playhouse, The Addams Family at the Theater of Madrid; and an octoroon at the Fountain Theater – and many more. Derrick’s last nomination was for a 2020 Ovation Theater Award for lighting design for Nowhere on the border at the Road Theater on Magnolia. He would like to thank the staff and leaders of Crimson Square and the Beverly Hills Playhouse for giving him the opportunity to create. Fortunately, the spirit of theater has allowed us to recreate living theatre. Derrick would also like to express his hope that everyone stays safe in these troubled times!

Games include encircling (2018), CUT (2015), YEARS UP TO DATE (2013), and COMMITMENT (2010). YEARS UP TO DATE was named one of Los Angeles’ Top 10 New Plays by LA Weekly and has since been performed in ten cities on three continents. Achievement credits include COMMITMENT, THE REAL THING, RABBIT HOLETTHE LAST FIVE YEARS, BURN THIS, THE HEIDI CHRONICLES, OLEANNA, PLOW SPEED, SERIOUS INJURIES ON THE PLAYGROUND and SHINY TRACES. Allen has won many years on stage, television and film in Los Angeles as an actor, and he is also active as a classical pianist – he was the winner of the Los Angeles Liszt Society competition in 2002, has recorded five compact discs (available on Apple Music and other streaming services) and regularly gives solo recitals on both coasts. In 2010 he was named a Steinway Artist. A Boston native, Harvard University graduate and longtime student of the late Milton Katselas, Allen is currently the owner and head teacher of the famed Beverly Hills Playhouse acting school. Her 2017 book THE OASIS OF MADNESS (available on Amazon) is a memoir of his apprenticeship with Katselas, as well as a guide to studying and pursuing acting in the 21st century. Allen lives in Los Angeles with his wife, three children and a black Labrador.

JEFFREY SUN (Principal Stage Manager)
Jeffrey Sun is no stranger to the Crimson Square Theater Company. Originally from the San Francisco Bay Area, Jeffrey made his stage debut in the San Francisco production of Allen Barton’s ENGAGEMENT in 2014. In 2015, he starred in Jordan Harrison’s MAPLE & VINE (Los Altos Stage Co.) and CHINGLISH by David Henry Hwang (Palo Alto Players) where he received a Theater Bay Area nomination for Best Supporting Actor. In 2016 he had the wonderful opportunity to direct and star in the San Francisco production of David Henry Hwang’s YELLOW FACE at the Firescape Theater where he was nominated for the SF Bay Area Theater Critics Circle. And in 2018, he reprized his role for the Los Angeles production of YELLOW FACE at the Beverly Hills Playhouse and most recently on LIVE AT THE PURPLE LOUNGE. Jeffrey has appeared on WHY WOMEN KILL (Paramount+), THE NEIGHBORHOOD (CBS) and upcoming FX show, THE PATIENT.

SANDRA KUKER RP (Sandra Kuker-Franco – Publicist)
Sandra Kuker-Franco is an entertainment industry expert. Her three-decade experience in music, film, television and theater has created a client list of diversity and successful campaigns. Sandra’s experience also includes chartering ships for themed cruises, film and TV castings, as well as reality TV, scripted TV documentaries. Highlights include the films A World Away by Mark Blanchard and Getting Unstuck by Conscious (Merle Soden). Stage projects include: I’m Not A Comedian…I’m Lenny Bruce – With Ronnie Marmo, directed by Joe Mantegna, Eisenhower: This Piece of Ground with Tony winner John Rubinstein, The Elephant Man, My Child Mothers Of War, Voice Lessons with Laurie Metcalf, French Stewart and Maile Flanagan, Adam Baum & The Jew Movie with Richard Kind, Sacred Fools Theater Company and Past Time, Prairie-Oke!, Almost, Maine directed by Marty Papazian, Panic! Productions include: Inspecting Carol, Next To Normal, Little Shop Of Horrors. A Time To Kill by John Grisham, Time Stands Still by Donald Margulies, Crimson Square Theater Company’s: Dinner With Friends, Live At The Purple Lounge The How And The Why and Sex With Strangers. Author Bill Ratner of Parenting For The Digital Age, and has worked with Retronuvo Media on reality TV, scripted TV and documentaries. Sandra works with theatrical clients, authors and entertainment professionals. Using the strength of personal relationships, alongside social media and traditional PR, promoting events, press releases and personalized media positioning for entertainment-centric clients and helps establish a brand presence with innovation, integrity and style. www.SandraKukerPR.com