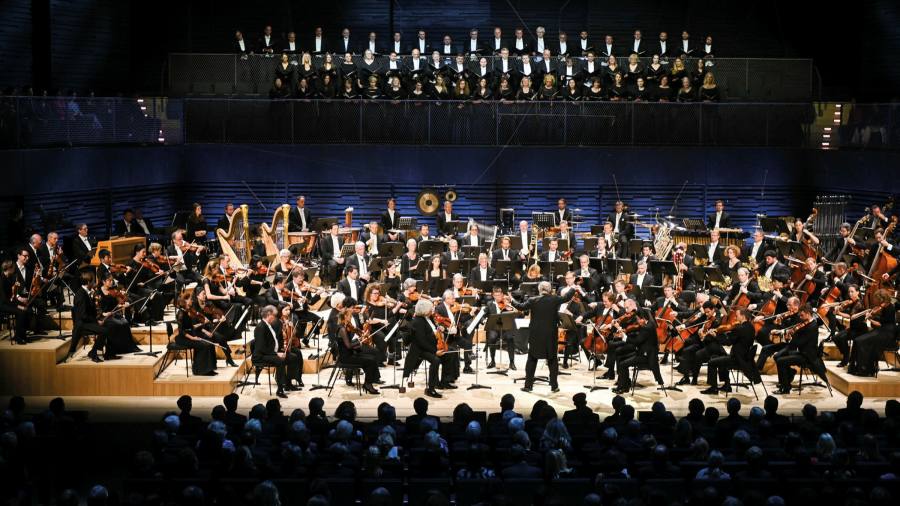 Munich’s new Isarphilharmonie is meant to be an interim concert hall — “an interim one that will exist for a relatively long time,” as the city’s mayor, Dieter Reiter, said in his opening speech last Friday.

A cavernous black shoebox covered in dark wood, the concert hall was built in 18 months and cost just 40 million euros. Compared to the 866 million euros spent on Hamburg’s Elbphilharmonie, it’s just peanuts – although, to be fair, this effort has neither the architectural ambition nor the cramped, waterlogged location. of its northern cousin. It’s essentially a fancy tent in which the Munich Philharmonic Orchestra can perform while the reviled and dilapidated Gasteig Concert Hall is being renovated, which can take a very long time. Plans for a 700 million euro concert hall for the Bavarian Radio Symphony Orchestra are also underway – so eventually Munich should have three decent concert halls, instead of none.

The foyer of the Isarphilharmonie, a former transformer room listed as a heritage site, is a sober and elegant space under a glass roof surrounded by two galleries. When the 1,800-seat hall is full – as it was on opening night – there’s barely room to move. And there are far too few toilets. Why do cinemas so rarely obtain this right?

Curiously, at a time when Covid-19 infections are still relatively high, the occasion has been declared a mask-free event. It was also the orchestra’s first full concert since March of last year; apparently the desire for normalcy outweighs the desire for caution.

The cool design by Gerkan, Marg and Partners, black except for the stage and auditorium floor, is remarkably understated for a Munich establishment. As if to underline the small budget, the two balconies that wrap around the sides of the hall are wire mesh. On the one hand, it’s reminiscent of a cross between an Imax theater, a mowing shed, and one of Netflix’s devilish gyms. squid game; on the other, a Calvinist sobriety that leaves the bling to Munich high society.

And to music. The opening concert, with the Munich Philharmonic Orchestra conducted by Valery Gergiev, was designed to test the achievements of star acoustician Yasuhisa Toyota.

And, yes, Toyota’s signature clarity was evident from Thierry Escaich’s first note. Emerging dances, ordered for the event. The woodwinds seemed to float above the orchestra, the brass had room to flourish, the strings formed a shimmering carpet. Escaich’s music is comfortingly sweet, a kind of sonic collage written by the meter designed to offend no one.

Beethoven’s Fourth Piano Concerto had the saving grace of soloist Daniil Trifonov, who understands well how to play with acoustics that will carry the softest sounds without muddying the loudest. Too bad, then, that Gergiev accompanied it with such brutal insensitivity, often lagging behind, carving out the accents of the work in a depressing and undifferentiated way. The paradox? This room wouldn’t exist without Gergiev’s political savvy and raw determination.

It wasn’t until Ravel’s ‘Daphnis et Chloé’ that we got a glimpse of the creamy blend of orchestral sound that might be possible here.

Gergiev did more than Henri Dutilleux Metabolisms, showing all the bite and clarity that his Beethoven lacked. With their barking brass, crisp pizzicati and slamming percussion, the work’s concise movements sounded clear and jewel-like.

A move by Rodion Shchedrin the sealed angel for choir and solo flute showed the warm mix the hall can bring to a choir – and yet it still felt like we could hear each singer individually.

Only at Ravel Daphnis and Chloe did we get a glimpse of the creamy blend of orchestral sound that might be possible here. There was room for plenty of volume; the sound never felt too big for the room. It was impossible to tell whether the fuzzy distance of the string sound was the result of the vagueness of Gergiev, the orchestra itself, or the new acoustics. It will take time for the whole to grow in space, and for space to imprint its mark on the whole.