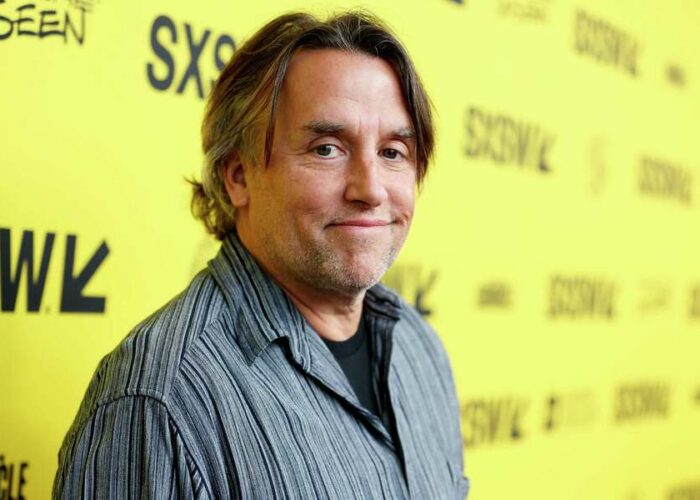 Richard Linklater lives in Austin, but he takes Houston with him.

It’s evident in the way the Houston-born director, along with fellow Houstonians Wes Anderson and Bun B, embarked on the effort to save the River Oaks Theater last year when it looked like he could face the wrecking ball. This is evident in his 2014 film “Boyhood” which includes a scene during an Astros game. And that’s evident in his latest film, ‘Apollo 10 1/2: A Space Age Childhood,’ an affectionate blend of fantasy and memoir about growing up in Space City in the late ’60s, which debuts Thursday at the Alamo Drafthouse at Katy and Cinemark 18 at Webster and then April 1 on Netflix.

Shot in live action and then manipulated with animation, “Apollo 10 1/2” tells the story of Stan, a fourth-grade student at El Lago’s Ed White Elementary, who has been chosen for a top secret mission by NASA, where his father works. It’s set against the very real backdrop of a three-network TV universe in a city that seemed to be perpetually on the cusp of the future – space travel! heart transplants! Astroturf! — where a Texas kid’s biggest concern was how to beat the crowds and ride the best rides in Astroworld (the amusement park, not the music festival).

The idea is something Linklater has been pitching for almost 20 years.

Photo: Courtesy of Netflix, Apollo 10 1/2: A Child of the Space Age

“It was 2004 when I first thought of it,” Linklater, 61, said during a break at South by Southwest in Austin, where “Apollo 10 1/2” premiered earlier. this month. “It was while I was doing ‘Boyhood’ when I first thought about it and thought ‘that was an amazing time (to be a kid)’. That’s when we landed on the moon. And then I remembered this fantasy I had of… this kid in space, kinda ridiculous. I mean, in the tangible world, it’s ridiculous, isn’t it? But it’s with a child and I had this fantasy.

“It’s such a privilege to be able to make a film that not only recreates a moment in time, but also recreates images of Houston in the late ’60s. And so it’s that same childhood fantasy of ‘Harry Potter’ or ‘Princess Diaries’ or something like that where the wider world kind of needs you… So it’s a childhood fantasy: not only are you chosen, but you’re needed to save or help our country. It’s funny, but the trick in the film is to play that very directly.

While much of ‘Apollo 10 1/2’ is based on Linklater’s childhood – “it’s embarrassingly personal,” he said during SXSW’s post-screening Q&A – he says that Stan is not his doppelganger. Linklater also tapped into the memories of family and friends to resurrect this world.

“I called my sisters and said, ‘Hey, what was our full (dinner) menu? I remember a lot of meat stuff,'” Linklater said. “And they say, ‘N’ don’t forget the canned ham.’ I’m like, of course, canned ham. Deviled eggs, of course. So I had a lot of consultants.

One friend, in particular, was especially valuable. Although Linklater himself went to various schools in the Houston area, producer Mike Blizzard actually went to the real Ed White Elementary School.

Mike Blizzard, top row, middle, drew on his memories of growing up in El Lago and attending White Elementary while researching “Apollo 10 ½: A Space Age Childhood.”

“Some of my friends’ relatives were big players in the Apollo missions,” Blizzard recently told the Chronicle.

In 2017, Linklater even appealed to Houstonians to share their home movies and stock footage. “There’s no bad material, as long as it comes from Houston in the 1960s, we want to see it,” the press release read.

“I was more like the city kid, but we were just there (near NASA) for a little while. And I was really trying to draw the comparison between the suburbs where there’s just flat land and houses and everything is new,” Linklater said, noting that he wasn’t there to make a documentary. “(My dad) didn’t work at NASA but I had friends whose dads worked. At the end of the day, I try to make an entertaining movie.

Outside of its setting, “Apollo 10 1/2” is notable for being Linklater’s third animated film, following 2006’s “A Scanner Darkly” and 2001’s “Waking Life.” Originally, Linklater thought of making a live-action film.

“It’s kind of a natural default mode,” he said. “But, along the way, it was pretty clear that at times, ‘Oh, it just doesn’t work like live action.’ In my mind, it was a little too literal for the fantasy element. I started thinking about animation… There’s something playful about animation for me. And one of our influences was Saturday morning cartoons, that vibe.

Photo: Courtesy of Netflix, Apollo 10 1/2: A Child of the Space Age

And that’s why Linklater chose to make his film within the confines of Robert Rodriguez’s Troublemaker studios in Austin — where he and animator Tommy Pallotta had access to the latest technology — instead of the streets of Houston. It’s a move that caused some grunts on this end of US 290.

“In a way, a lot of stuff was shot in Houston because we kind of collected a lot of footage or pulled from Houston’s history,” Linklater said. “We had people sending us home movies, some of which are in the movie. All the documentary stuff (about) the Astrodome. The historical elements are so Houston. It really didn’t matter where we captured the actors playing them, because the movie was so Houston.

Much of “Apollo 10 1/2” will resonate like a tuning fork with people in their 60s who were there at the time, seeing movies in Alabama, watching “It’s About Time” on TV, playing Stratego and eating Jiffy Pop. But what about Gen X, Gen Z, and Gen Y who only know about this era from history books or memories of Thanksgiving dinner?

“Whatever cultural analysis is going on in the movie, it might get a bit lost,” Linklater said. “(But) I think the kids like it. People seem naturally curious about previous eras. I see it with my own children. I have two 17-year-olds, high school kids, and they’re really interested. They love the 80s. They love the music. They love the culture. They love the 90s. They want to explore. I certainly did. I liked other eras that you didn’t experience.

And Linklater isn’t done putting Houston on the screen. On his to-do list is a biopic of controversial comedian/social critic Bill Hicks who cut his teeth on the area’s comedy scene in the ’80s, gained national fame in the early ’90s and is died of pancreatic cancer at the age of 32 in 1994.

“It is still at a certain stage of development. Biopics are difficult,” Linklater said. “We are about the same age. We graduated from Houston high schools the same year. I always felt an affinity for him. I think there is something that needs to be said there. Bill still talks to us all these years later, that’s for sure.