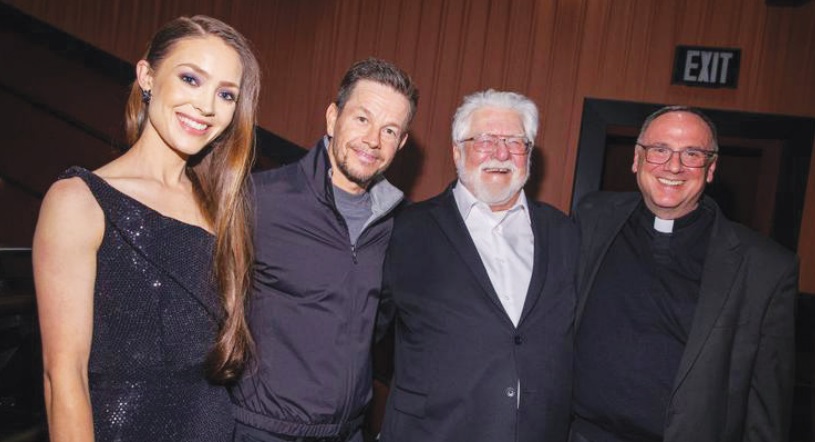 Father Stu and the Gift of Divine Mercy

After accepting the difficult fate God had in store for him, Father Stuart Long spent his last days as a channel of Christ’s grace.

Alyssa Murphy
When Catholic actor Mark Wahlberg cast himself as Father Stuart Long in the making of his new film, Fr Stu, which opened in theaters across the United States on April 13, he made visit to Bishop George Thomas, who ordained the former boxer. Bishop Thomas told Wahlberg something profound. Recounting the conversation to the Register on April 4, Wahlberg said, “It is truly remarkable: Bishop Thomas said he knew he was right to ordain Stuart because Stu had done more in the four short years that he was a priest more than the bishop had made in 40 years.”

While still a seminarian, he was diagnosed with a rare condition called inclusion body myositis, which mimics the symptoms of Lou Gehrig’s disease. Illness threatened to derail his desire to become a priest – how could his slowly debilitating body ever lift a chalice while celebrating mass or performing other priestly duties?

“When God hurts us, he brings us closer to him,” Father Stu says in the film. Witnessing so many through his suffering, this aspect of Stu’s life struck a chord with Wahlberg, who is no stranger to loss or regret. Reflecting on his own mother’s death while filming the film, Wahlberg told the Register, “You know, my dad went through a lot and my mom went through a lot. And we are all lucky to share this same experience, right? If we are lucky enough to live long enough and if we can share this suffering with the grace and love with which Stu did, we will all be better off.

Produced and fully financed by Wahlberg, the actor seems to fully inhabit this fighter who becomes determined to become a priest, unfolding a heartbreaking cathartic journey that ultimately leads to graceful redemption. Edgy humor is also sprinkled throughout the film, reflecting the heart of Stu’s character – he was a prankster, always quick with jokes. Fr Bart Tolleson, who was ordained at St Helena’s Cathedral in 2007 alongside Stuart, said this was how Fr Stu united with Christ.

“Jesus rose from the dead. It’s the truth. This is what gives us our identity as Christians. And so, no matter what suffering we have to go through, we unite it with Christ. And Stu was very keen to say that yes, if God wanted him to suffer, he would suffer of his own free will. But he was going to do it with joy, to give people hope, because he was talking about heaven. He said, “I will not suffer forever. Eventually, I’ll move on. And in this, God does great things. And so, he kissed her willingly. And he always retained a good sense of humor and a cheerfulness, for the most part.

Despite some criticism of the film due to explicit language and an R rating, the Diocese of Helena released a statement celebrating the story’s central message: “Bishop George Thomas, who ordained Father Stu to the priesthood, and Bishop Austin Vetter, the current Bishop of Helena, agreed; Father Stu – raw and unfiltered, combative and filled with grace – testifies to the truth that no one is ever beyond the reach of redemption.

Redemption does not belong to Father Stu alone in the film. The dynamic between Stu and his father, brilliantly woven by writer-director Rosalind Ross, offers an insightful lesson on family.

Ross wrote the role of Bill Long with Oscar-winning actor Mel Gibson in mind. Separated from his family, the elder Long returns to help his near-paralyzed son. In one gripping scene from the film, Wahlberg, as Father Stu, crawls, dragging his own body towards a statue of the Blessed Mother. Gibson’s character enters the cathedral and eventually helps Father Stu stand as he stands helpless before Notre Dame.

Ross told the Register that she hopes the film will inspire hearts to convert “into Stu’s journey and through reconciliation with his father.” Hopefully this can reassure people that it’s never too late to try and fix those links. It is also never too late to change. It’s never too late to ask for forgiveness, improve, seek redemption, whatever you want to call it. It is never too late to do so. We currently live in a society that I think is reluctant to recognize how people can change. I think that’s really unfortunate. I think that sends the wrong message to our children. Wahlberg also spoke of the deep devotion that Father Stu’s father had in caring for his son during his most critical days.

“There are so many messages in the movie,” Wahlberg told the Register, but he chose “that message of the father-son relationship — to see how wonderful Bill was to come back and be able to really take care of Stu. in the time that was most needed, and to redeem himself as he did.

Father Stu’s conversion also had a profound impact on his parents, eventually leading them to be confirmed as Stu lay on a stretcher, tears streaming down his face as he saw God’s grace at work in their lives. Father Stuart Long died on June 9, 2014, at the age of 50.

The providence of God works in mysterious ways. The grace that led Father Stu to follow Jesus Christ, become a priest and accept all that God had in store for him, eventually became the greatest gift to all who knew him – a conduit through which a suffering soul could be cleansed of divine mercy, flowing from the cross of Christ. —NCRegister