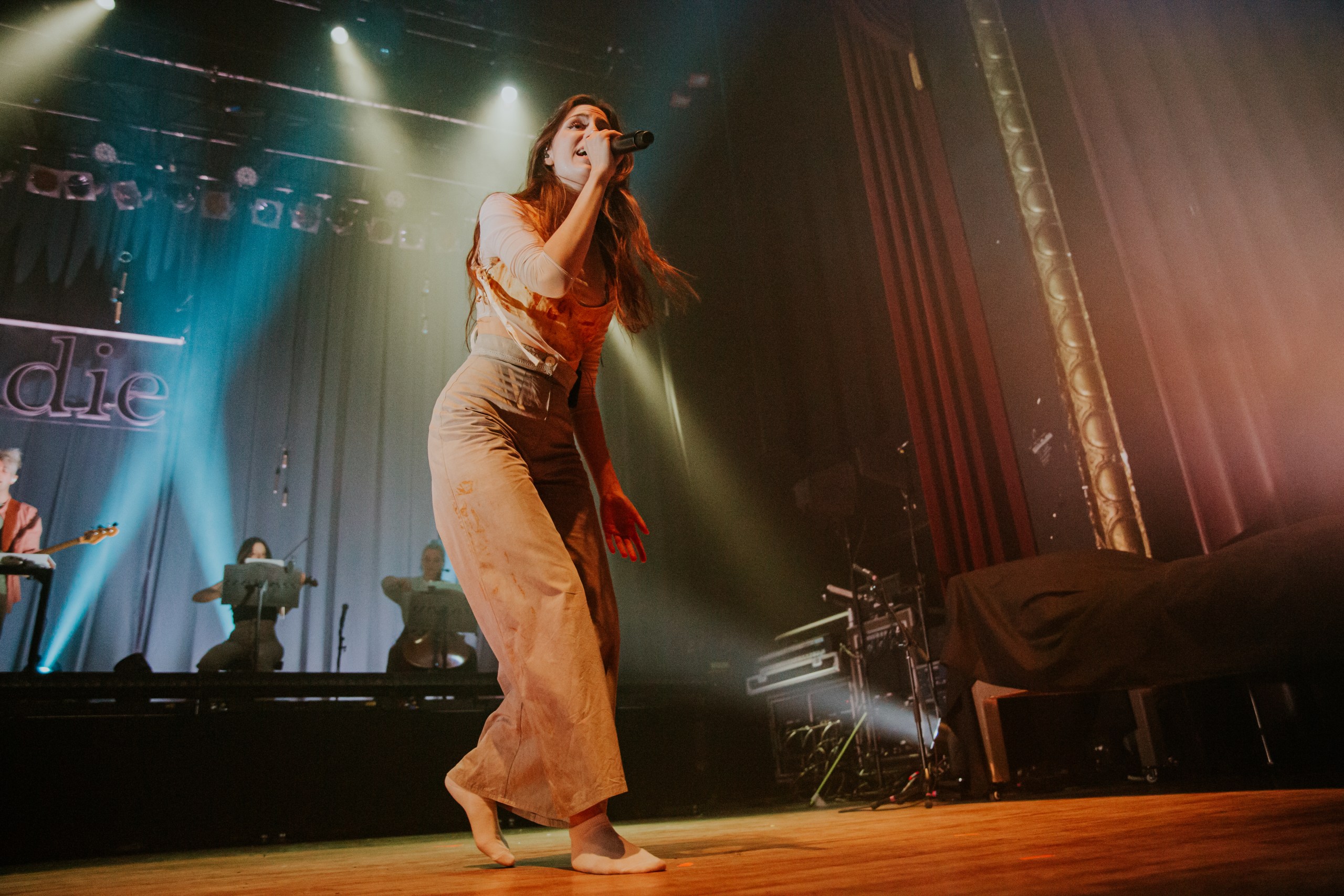 Cold February rain didn’t stop dodie fans from arriving early at the Royal Oak Music Theater for the fifth night of her ‘Build A Problem’ tour. Wrapped in winter coats and umbrellas in hand, a long line of fans wrapped around the timeless theater in eager anticipation of the UK-based singer-songwriter’s performance.

For many (myself included), this show was the first gig since the COVID-19 pandemic began, and dodie surely didn’t disappoint with her warm welcome to a live performance. Taking the stage with her five band members, dodie kicked off the night with “Air So Sweet” from her May 2021 album, Create a problem. “We’re going to dive into the feelings,” the 26-year-old singer announced before moving on to “Cool Girl,” also from her latest album.

After starting the evening with newer music, dodie announced that she would be revisiting some of her older songs. Sitting at her rustic piano, she laughed into the microphone, admitting she was “on the good side of getting drunk” after snapping a photo with her bandmates before the show. Besides a few faulty chords, you could never tell that dodie felt a little tipsy – her vocal delivery was impeccable and possessed the pensive, nostalgic energy that made audience members swoon and wipe away tears.

dodie is an extremely talented and versatile performer, and she kept the audience spellbound from start to finish. Between her spontaneous interpretative dance and her clarinet and drum solos, dodie’s performance stayed true to the authentic, offbeat musicianship that launched her career nearly six years ago. What’s most remarkable about dodie, however, is how she connects with her fans. When on stage, she is constantly on the move, dancing alongside her band members and delivering witty responses to fans as they shout out messages of love. At one point, an audience member even threw her bra on stage, to which dodie asked, “Okay, whose bra is that?” while suppressing a fit of laughter.

The way dear fans hold Dodie was clearer when she performed “Rainbow.” Before performing the song out of Create a problem, dodie asked the crowd, “Who’s gay here?” to which the crowd erupted in a roar of applause and shouts. dodie, who is bisexual and champion of the LGBTQIA+ community, beamed and explained how “Rainbow” is a song she wrote to overcome the stigma she witnessed and experienced as a queer person who grew up in a conservative city cold towards the LGBTQIA+ community. With rainbow lights accompanying dodie and her band, there were cheers and tears shed as the Royal Oak Music Theater celebrated love in all its forms.

Perhaps the most emotional part of the night was when dodie performed her 2019 hit “She.” After performing the song on the piano in front of a choir of fans, dodie opened up about how she tries to find new meaning in her older songs when performing them live. On that chilly February night, dodie opened up about how “Elle” became a metaphor for her past feeling trapped in her hometown, a reminder of how far she’s come since when she was ashamed of her queer identity. The auditorium was still such as she described how she was so happy to see more acceptance from the LGBTQIA+ community and how much she wished her young self could have the support she now has.

dodie’s US tour includes the opening act for Lizzy McAlpine, a singer-songwriter from Philadelphia. As the lights went down in the theater, fans chanted “Lizzy” until the 22-year-old singer-songwriter took the stage for an acoustic set. Performs songs from her upcoming album five seconds flat, the packed theater was filled with a chorus of voices reciting every word of McAlpine’s songs. The only thing that could have rivaled McAlpine’s ensemble were his retro jeans, while several shouts of “I like your pants!” were heard from across the auditorium. During her set, McAlpine even commented on how the audience “sounded so good” while singing her songs.

For the performances of McAlpine and dodie, almost everyone around me knew all the lyrics to their songs and were singing all the time. Some fans knew the music so well that they even harmonized with the group, creating a mesmerizing sea of ​​vocals. This phenomenon alone is a true testament to the energy dodie and McAlpine brought to Royal Oak, and it was wonderful to see two powerful songwriters pour love into their art and share that love with their fans. .

Daily Arts writer Kaitlyn Fox can be reached at kjfox@umich.edu.

“CODA” will be released in theaters for free next weekend