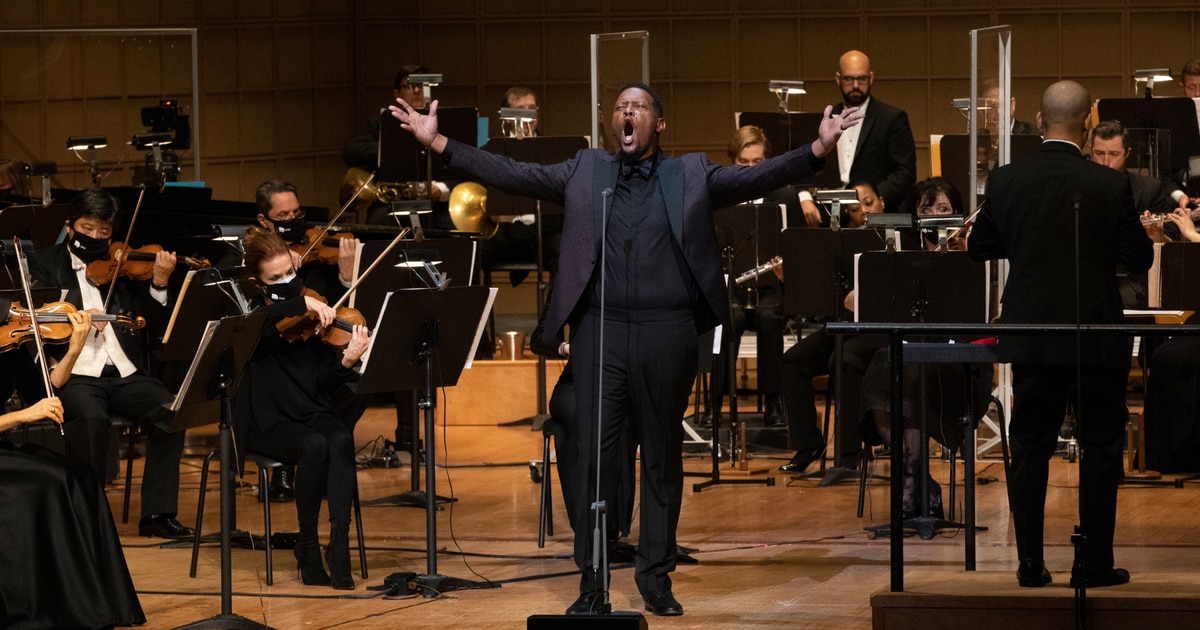 With an array of innovations and initiatives, the Dallas Symphony Orchestra (DSO) seeks to bring its music to an ever-expanding audience in North Texas. Throughout the COVID-19 pandemic, the organization has strived to continue providing world-class musical performances, achieved through an ingenious combination of limited-seat live performances and social distancing at the Meyerson Symphony Center. , more than 300 open-air chamber concerts in venues from parks to car parks and the inventive use of digital technology.

As the 2021-22 season of the symphony begins, the DSO aims to move beyond the edge of the Meyerson stage, bringing the beauty of its music to a growing number of North Texas residents.

An inventive aspect of the DSO’s 2020-21 season was the Next Stage digital concert series, presented by PNC Bank. The full digital video performance series will continue throughout the upcoming season, which began with the release of the first concert in the Texas Instruments Classical series. Music Director Fabio Luisi conducted the DSO in a presentation of Frederick Converse’s “The Mystic Trumpeter”, Brahms’ First Symphony and Copland’s Organ Symphony, with soloist Bradley Hunter.

Subsequent performances from the classic Texas Instruments series, as well as select concerts from the DSO’s Pops series, presented by Capital One, will be available for individual rental at $ 10 per video or $ 125 for a season pass. . Subscribers and donors will receive free access as part of their support.

“We launched Next Stage during the 2020-21 season to expand the reach of our performances when audience capacity was so limited,” said Kim Noltemy, Ross Perot President and CEO of the Dallas Symphony Orchestra. “The response has been overwhelmingly positive. In addition to enjoying the rehearsals of our concerts, viewers were able to gain a unique perspective of the concerts and music of the Meyerson stage.

The Next Stage concerts of the season will be available via a new digital platform at watch.dallassymphony.org. In addition to concert videos, this new portal will also host the Green Room Chat series, interviews with DSO performers and a variety of educational materials. The new platform will dramatically improve the user experience, while making it easier to integrate DSO performance into homes and classrooms.

Information and digital tickets for Next Stage performances, discussions, interviews and educational materials are available at dallassymphony.org/nextstage.

Partnership with Bloomberg Television and Toyota

A series of three special DSO concerts will reach families across the United States through a partnership with Bloomberg Television, and these newly recorded performances are presented by Toyota.

The first of these specials will air on November 12, featuring jazz trumpeter and Grammy Award winner Chris Botti performing the two beloved standards, along with new arrangements written especially for him.

Additionally, in remembrance of those who lost their lives in the COVID-19 pandemic, DSO Music Director Fabio Luisi will conduct Mozart’s iconic and beloved Requiem. With some of the most recognizable and poignant music in the repertoire, the Requiem will be a fitting recognition of the collective loss of the world and a look to the future. The Dallas Symphony Chorus and world-renowned soloists will join the DSO in this moving performance, which airs December 4-6.

The final program of the series is the return of “A Holly Jolly Celebration”, a one-of-a-kind holiday event featuring festive music and a visit from Santa himself. This year, Dallas business, civic and community leaders will take the stage in guest roles, from narrator to conductor to soloist. They include Trammell S. Crow, founder and visionary of EarthX; Chad Houser, Founder, CEO and Executive Chef of Café Momentum; TD Jakes, Founder and Chairman, TD Jakes Foundation; Lynn McBee, civic leader and former chairman of the board of directors of the Dallas Opera and TACA; and Christine Perez, editor-in-chief of D CEO.

The whole family will enjoy this unique holiday celebration that brings the Dallas Symphony Christmas tradition back to the comfort of their home, and this concert begins airing on December 18.

“We are delighted to expand our partnership with Bloomberg Television and bring world-class artists and DSO artistry to a wider audience,” said Noltemy of DSO. “We are grateful to Toyota for supporting these shows. “

Jazz at the Symphonic Center

The DSO and the Black Academy of Arts and Letters (TBAAL) will host the second season of Jazz at Symphony Center, featuring some of the world’s greatest jazz artists.

This season’s jazz series kicked off on October 21 with a performance featuring violin and vocal virtuoso Regina Carter. With sound that transcends genres, Carter is widely hailed for her mastery of the violin and determination to expand its possibilities. His performances feature many styles of music, from jazz to Latin to country and virtually every musical genre in between. In doing so, she has established herself as a true pioneer of her instrument.

In addition to Carter, other artists will be featured in the current season’s jazz series:

Jazz at Symphony Center is a critical part of an on-going DSO / TBAAL collaboration that began in the early 1980s, and the current series is curated and presented through the efforts of TBAAL’s founder and artistic director, Curtis King.

“The DSO is delighted to continue this series of presentations with Curtis and TBAAL,” says Noltemy. “Jazz at Symphony Center is a partnership that brings Curtis’ connections and his vast knowledge of the jazz space to the incredible venue Meyerson Stage.”

Supporting his remarks, King adds, “I enjoyed working with Kim, getting to know her and bringing this collaborative partnership to life. We look forward to building on the success of the inaugural season and expanding TBAAL’s presence at the Meyerson and bringing our work to a larger community.

Symposium on Women in Classical Music

The DSO will be hosting its third annual Women in Classical Music Symposium from November 7-10, and this year’s gathering is titled “The Future is Female – Inspiring Women in Top Leadership Positions”. This year’s symposium is presented by the Virginia B. Toulmin Foundation. Symposium sessions take place at the Meyerson Symphony Center as administrators, educators, musicians and conductors from around the world come together in conversations, panels and focus groups.

The Women in Classical Music Symposium strives to help women reach their full potential professionally, while simultaneously acting as a catalyst for large-scale change in the industry. This year’s symposium roundtables include:

An exceptional panel of panelists

Some of the panelists for this year’s symposium include:

The 2021 Symposium will also continue its tradition of networking opportunities with the ever popular Coffee-Hour Chats and Speed ​​Dating mentoring sessions. People in all roles in classical music – from orchestral members to soloists at all stages of their careers – are welcome to attend, mingle and meet other industry professionals.

One of the highlights of this year’s symposium will certainly be the presentation of the annual DSO Award of Excellence to Grammy Award-winning soprano Renée Fleming, hailed by many as “America’s reigning diva.”

In addition to accepting this award, Ms. Fleming will give a lecture entitled “Music and the Spirit”. She will be joined by local expectations Nimesh Patel, executive director of neurosurgery at Methodist Dallas, and Daniel Tague, assistant professor and chair of music therapy at Meadows School of the Arts at Southern Methodist University, for this presentation. She will also star soloist, with baritone Rod Gilfry, performing “The Brightness of Light” by Pulitzer Prize-winning composer Kevin Put as part of the Texas Instruments Classical series.

“I am delighted to welcome our industry colleagues back to Dallas for a few days of conversation and discussions driven by unique experiences,” said Noltemy. “Now that the world seems to be having a very dark year, it is important for those of us in the classical music world to continue to look ahead and work towards a healthier future for our female colleagues. This year’s symposium will focus on the future women leaders in our field and how we as women can support each other in this revolutionary change.

From humble beginnings to world-class performances

Over 100 years have passed since the DSO’s first small show in 1900, and the organization has now grown and evolved into the largest performing arts organization in the Southwest. With a constant commitment to reaching and inspiring audiences with his distinctive blend of classic programming, he proves to be a cultural citizen of the world and his community.