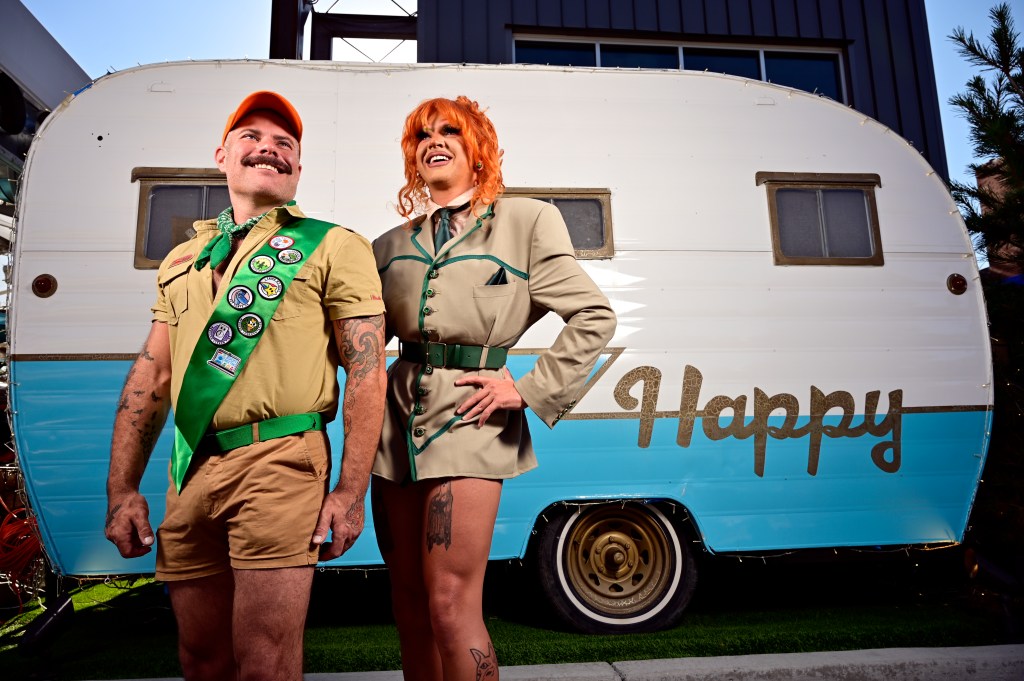 Cult movie nights are back in Denver at SIE FilmCenter

Andrew Scahill and Electra DuPri feel a duty – a calling, even – to get crafty.

“We’ll have a corner of making merit badges for our first film, ‘Troop Beverly Hills,'” Scahill, an assistant professor in the Department of English at the University of Colorado at Denver, said of his new series of films with drag queen DuPri. “There will be gay survival passes, like I Survived Christmas with My Republican Family, or First Time in Heels, and a contest with prizes.”

Scahill, a nationally known horror film specialist, joins others in the metro area eagerly reviving “event” screenings, or interactive movie nights, to reunite audiences that have been scattered by closures of public culture in the age of the pandemic. In Scahill’s case, it was the LGBTQ community he used to see regularly at the Singalong Bingo nights he scheduled at the Triangle.

In-person fellowship is crucial for marginalized communities, he said, because little else in the mainstream is done with them in mind.

“It’s about the collective outpouring of emotion,” he said. “It’s a really powerful thing that extends beyond the screen and into our daily lives.”

That’s why Scahill has gathered a new community of friends in his garden for outdoor screenings for the past two years. For others, it’s driven by the weird and wild genre films that are traded as currency among moviegoers, or a love for midnight screenings of repertoire classics with live music and shadows. worn, to the the eternal “Rocky Horror Picture Show”.

“Event shows were a priority for us when the first-run schedule was really dark,” said John Smith, senior programmer at Alamo Drafthouse Cinema, based in Austin, Texas, which has locations in Littleton, Denver and Westminster. “But we were doing automatic spacing because of (COVID), and we were getting rid of the interactive stuff… like blowing bubbles and spraying confetti. Even though it’s movie nights, we had to consider the practical issues of health and safety, and what we do to clean up our servers afterward.

First-run titles have mostly returned to cineplexes, with the public. Box office receipts this summer in the United States and Canada are down just 12% from the summer before the pandemic, CNBC reported. Between May 1 and July 10, theaters raked in $2.27 billion in tickets, up from $2.58 billion during the same period in 2019 – a remarkable return for an exhibitor industry on the verge of collapse. ruin.

But even with the help of films such as “Thor: Love and Thunder” or “Top Gun: Maverick”, art and independent cinemas continue to train moviegoers to see them as meeting places. Part of Alamo’s strategy is to persuade people who only see one or two movies a year to come back for things they can’t get anywhere else, Smith said.

That means adding custom intros and interviews with the cast of “Lord of the Rings,” for example, or getting commentary from director Ari Aster to direct a special screening of his visionary horror flick “Midsommar.”

“We helped chart a theatrical path around Denver for the Indian epic ‘RRR,’ which we’re really proud of,” said Jake Isgar, a San Francisco-based film programmer for the Alamo who pays particular attention at the Denver market. “A lot of the experiments revolve around Denver, because we’ve had so much success programming genre titles there.”

Isgar cited a Sept. 9 live musical performance by The Invincible Czars, at the Littleton Alamo Drafthouse, to back up the silent horror classic “Nosferatu.” It is already close to sale. The Czars are also performing at the Lyric Cinema in Fort Collins the day before, Sept. 8, as part of its nationwide “Nosferatu” theater tour.

“From there, you can add whatever you want: quote, vocals, live music, drag performance, review for a post-movie conversation,” Garcia said. “It all starts with not feeling like you’re in church.”

That sentiment has often permeated movie theaters, but its cunning setback dates back to cinematic carnival barker William Castle, who rigged seats with electric charges for his 1959 horror flick “The Tingler,” and the hero trashy John Waters and his Odorama cards for 1981’s “Polyester” (also on Castle), Garcia said.

“Heck, even Hitchcock provoked ‘Psycho’ by demanding that no one be allowed (in) after showtime,” he said. “People were like, ‘Well, why the hell? It must be special!’ ”

Garcia and the Sie just wrapped up the 12th year of their sci-fi film series with the Denver Museum of Nature & Science and Metropolitan State University of Denver, which combines screenings of sci-fi classics with post- film – both film studies and the real science in film. It complements longtime beloved Sie series such as Theresa Mercado’s Scream Screen. (Mercado also organizes and hosts a secret film marathon on September 3 there).

Scahill and DuPri rely on this legacy for Rainbow Cult. Scahill has shortlisted dozens of titles for the series — films constantly watched and shared by his queer friends over the years — and offered audience appeals such as the 1999 comedy “Drop Dead Gorgeous” (he and DuPri plan a live show for that), plus “Clueless”, “Showgirls”, “Zoolander”, “The Apple”, “Waiting for Guffman” and many more. In October, they’re going the horror route, though they haven’t settled on “Carrie,” “The Craft,” or “Serial Mom” ​​yet.

“You can flaunt ‘Mean Girls’ or ‘Addams Family Values’ anytime at home on the couch,” Scahill said. “Even my students say, ‘Why would anyone want to own a film?’ because everything is available all the time. It is the living element.

This element is what continues to set screenings of, say, 1975’s “Rocky Horror Picture Show” apart from other cult movie nights. Over the past four decades, the campy musical has become exemplary of how audiences make the lyrics their own, with amateur shadows playing under the screen and audiences freely quoting their favorite lines.

“People should feel like they’re catching up at these events,” said Alamo’s Smith, who is thrilled with the return of the theater chain’s horror series Graveyard Shift, which is also set in Denver. “Because they really are.”

Subscribe to our weekly newsletter, In The Know, to receive entertainment news straight to your inbox.

World Premiere of ST. SEBASTIAN by Andrew Kramer will be presented at the Den Theater in September