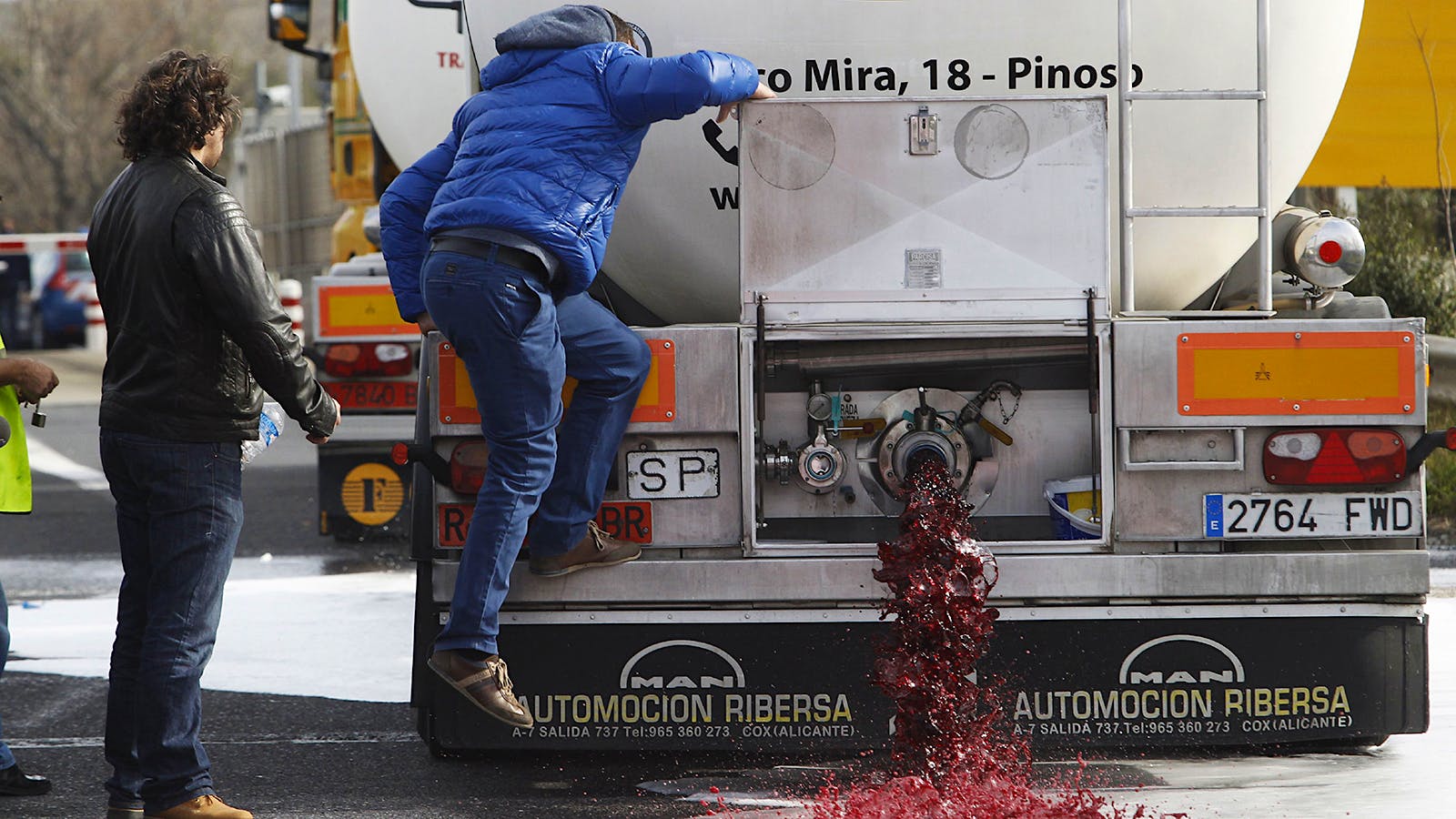 “Safer at home”? Not if you’re wine. “On break” ? Not if you’re the world’s most cunning wine criminals. While the law-abiding shelter is in place, the wine villains haven’t stopped resting. Just last week, a man spilled over 1,000 gallons of red wine on California’s Highway 99 after jumping onto a tanker truck, climbing under it, and unscrewing a valve for a few sips… as he moved at highway speeds. A rogue French policeman and his four accomplices have been accused of scamming a champagne heir out of tens of thousands of bottles, in a five-year $146,000 scam that involved false promises of appearances at the cinema, and deals with international royalty and alumni President Barack Obama. And a man has been charged with champagne theft and assault. His weapon? A cough.

Modest California Highway Patrol received a call on May 5 from a Cherokee Freight Lines truck driver: he had a wine leak, and he suspected it might have to do with the man in his underwear who had tied himself to the frame of his cargo truck. Video from the tanker’s dash camera showed the thirsty suspect signaling the truck driver to pull over, then jumping onto the truck as it returned to the highway. HPC Officer Tom Olsen Told CBS13 Sacramento it was one of the top 10 calls of his career; the takeout extreme taster was still in a “snow angel” position under the tank when officers arrived. He was charged with vandalism, in the proud French tradition.

Wine crime in Europe is no less absurd. A French officer working for the country’s VIP protection service has been charged after allegedly defrauding a Champagne heir and winery owner in a series of bizarre and bizarre tricks. Citing his connections in elite circles, the officer, according to the charges, convinced Champenois to pay to transport a plane that was supposed to be a gift from Obama, and promised him secret liaison roles with the Moroccan royal family and actor in an upcoming Alain Delon film, in exchange for fizz and money. In one exchange, the officer demanded 50,000 bottles of the winemaker’s finest champagne and $43,000 to secure contracts with high-profile figures, including the “emperor of China.” The victim didn’t understand when the Moroccan royal family didn’t show up for their first meeting in Marrakech; by the time he became wise, his Champagne house was heading for bankruptcy.

Wineries and warehouses have also been impacted in recent weeks with more, uh, recent wine heists. Between April 3 and 6, burglars broke into Château Cassemichère, south of the Loire Valley city of Nantes, and stole thousands of bottles of Chardonnay, rosé and Muscadet, including a bottle of the vintage 1601; the investigation is ongoing. Meanwhile, in Austria, a man has been sentenced to three years in prison after stealing more than $500,000 worth of goods, including 3,144 bottles of champagne from a warehouse near Vienna. The man explained in a virtual lawsuit that he had accumulated huge debts; the judge was seemingly impassive, even though the face masks made it hard to tell.

And in England, thieves target shops and supermarkets. On March 29, a man was charged with the theft of two bottles of champagne from a store in Suffolk. An assault charge was added because the suspect allegedly threatened to breathe and cough on a security guard as he was approached holding the bubbly. Another shoplifter near the city of Leeds has been arrested after stealing more than $1,200 worth of champagne in multiple shoplifting – from the same Tesco store. Drink offenders, it seems, have this in common with the rest of us: they just got crazier and crazier.

Enjoy without filter? The best of pop culture’s unfiltered beverage selection can now be delivered straight to your inbox every two weeks! Register now to receive the Unfiltered email newsletter, featuring the latest scoop on how wine intersects with film, TV, music, sports, politics and more.