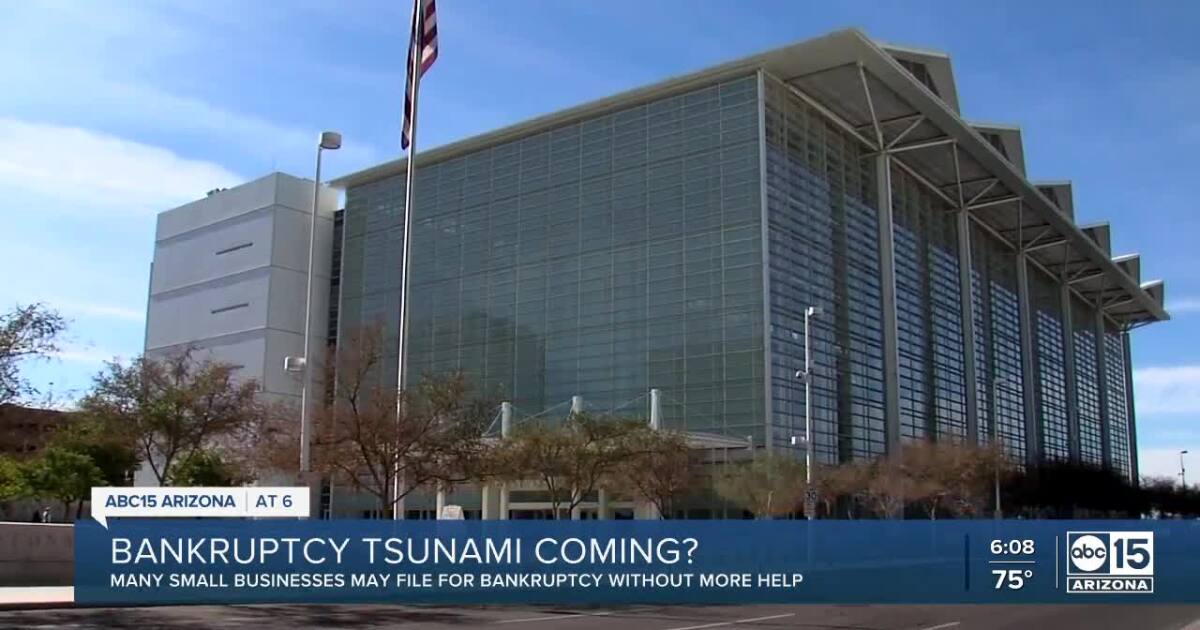 Courts could soon be overwhelmed with bankruptcy filings

PHOENIX — It’s been a tough year for many small businesses. Some are hanging by a thread, with business severely impacted by COVID-19.

Surprisingly, the number of bankruptcy filings has remained stable and even seen a slight decline this year, but financial experts advise that this could just be the calm before the storm.

“Maybe the best way to put it is that there’s a tidal wave coming. The question is, are you going to be in front of that tidal wave or crushed by the tidal wave, because it’s coming “said Lamar Hawkins of Guidant Law Solidifier.

Hawkins specializes in bankruptcy cases. He is also Chairman of the Bankruptcy Law Advisory Board of the Arizona Board of Legal Specialization.

Hawkins said thanks in part to government loans and mortgage forbearance, many businesses have been able to stay afloat, but those loans are coming due soon. Forbearance programs that allowed you to delay your payments will end.

“There are also a lot of loan defaults, but none of the banks want to be the first to tag lenders with foreclosure sales,” Hawkins said. “No bank wants to be seen as the bad guy first.”

For businesses already struggling before the pandemic, COVID-19 may have pushed them over the edge.

One of them was Decompression Pros, a company that sells medical equipment. The company founded by Brian Self had gained international fame and was doing business in several countries, but the pandemic led to a big loss of turnover.

The company relies on travel to set up medical supplies and provide support for its customers, who have also been hit hard during the pandemic.

“It’s really tough. I fought for as long as I could,” Self said, saying debts were piling up and he had to turn to his last resort, bankruptcy.

With Hawkins as his attorney, Self was able to take advantage of a new law that came into effect in the summer of 2019 called Subchapter 5, or the Small Business Reorganization Act.

Hawkins said the law has been a “life raft” for small businesses trying to stay afloat. This has reduced the time and costs associated with filing a traditional Chapter 11 bankruptcy.

“It’s a method of paying off your creditors over time rather than giving up your assets immediately,” Hawkins said.

He added that if the debtor’s plan was “consensual” with creditors, debtors could be released on the same date the court confirmed the plan.

This confirmation could occur within five months of filing for bankruptcy, compared to the three to five year delay in a Chapter 13 or similar significant delays in a Chapter 11 filing. This could help business owners and individuals to get back on their feet much faster.

Filing for bankruptcy is the last resort for entrepreneurs and individuals.

Hawkins said a good lawyer would always work to ensure clients explored all other options first.

“You mean emotion? It’s not uncommon for people to cry in my office when we first meet,” Hawkins said.

For companies and individuals who are struggling, he advised them to start looking at all of their options. This included talking to landlords and lenders to see if they would work with you and let you make the payments over time.

He also advised saving as much money as possible and prioritizing out-of-pocket expenses versus “expenses”. Ultimately, Hawkins said there is no longer any stigma associated with filing for bankruptcy and there are ways to do it while taking care of your financial obligations and saving your business, home and life. your car.

“You don’t have to lose all your assets. There is a light at the end of this tunnel. You can go through this process,” he added.

Before filing for bankruptcy in Arizona, you should get credit counseling.

Here’s more information about filing for bankruptcy in Arizona if you find yourself in this situation: Before filing | District of Arizona | United States Bankruptcy Court (uscourts.gov)