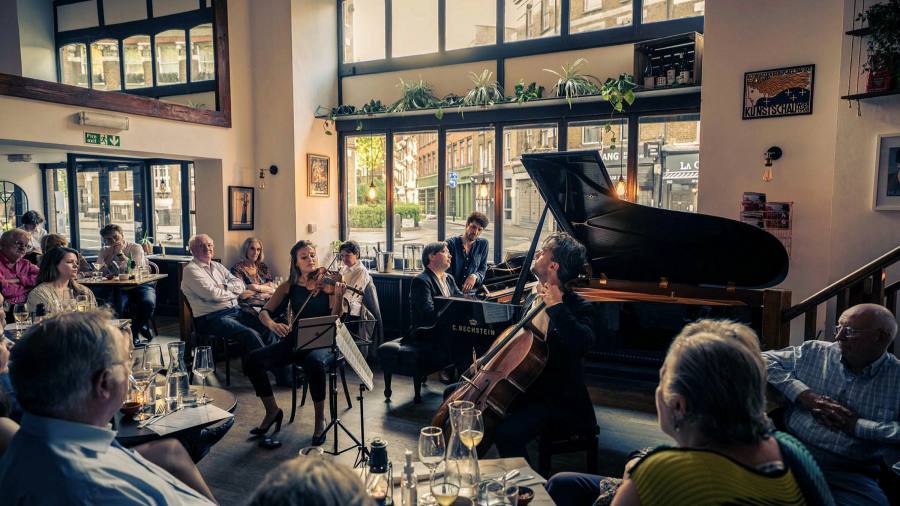 It all started with the first easing of Covid restrictions in the summer of 2020. While major music venues remained closed, a small Clerkenwell-based venue called the Fidelio Café began hosting socially distant performances from artists such as cellist Steven Isserlis, violinist Alina Ibragimova and other stars of the classical music world, each with a live, albeit tiny, audience. The concerts sold out, and soon other smaller venues began offering culture-starved audiences the opportunity to hear musicians who under ordinary circumstances would have played in the concert halls. most prestigious in the UK.

Now, with the reopening of these venues, one might have expected a return to pre-Covid normality: established classical musicians in established performance venues, with mostly populated smaller spaces, as they were before the pandemic, experimental artists and young musicians on the Fabriquer. It didn’t quite happen. Among those performing at the Fidelio Café next month is pianist Angela Hewitt. Classical Vauxhall, a recent concert series held at St Mark’s Church in Lambeth, has featured artists such as soprano Elizabeth Llewellyn.

Meanwhile, the London club scene offers something equally ambitious. Featuring cellist Sheku Kanneh-Mason and saxophonist Jess Gillam, noisenights is as prestigious as anything you could find at Wigmore Hall. But this crowdfunded chamber concert series, which returns in its latest installment this week, takes place in settings that include a converted train station, a former sorting center and a revamped parking lot (Well Seasoned is a venue created from a seven-storey car park in Peckham, south London).

“Costs go down when you go to venues outside of the classic circle,” says Jack Bazalgette, co-founder of Through the Noise, which organizes noisenights. “It’s because the money these sites can bring to the bar is huge. As long as you fill the place with punters, they’re happy. He continues.”, Because our concerts are very short, we are able to do two sets per night. . . Our gigs are commercially viable.

By catering to our newly awakened desire for convenience and community, Bazalgette thinks it serves another purpose: “People who come to noisenights are much more diverse and reflective of where the gigs are than those who show up. to large concert halls, helping to address some of the accessibility and diversity issues that [our industry] constantly worried.

He believes a shift to experimental venues will help tackle what he sees as a problem: the intellectually picky – some would even say pretentious – side of the gig. “I think there’s been too much emphasis on whether one person’s interpretations of Chopin are a little different from someone else’s,” he says. “And most of the general public won’t be too picky about that kind of thing. What matters is [the ability to project] a picture. Almost all of our ticket sales are based on the 10 seconds of a video an artist uploads to Instagram. It’s about taking a peek and treating yourself almost like a singer-songwriter starting a career.

Does this approach encourage superficiality? Not necessarily, judging by the experience of violinist Tamsin Waley-Cohen, who performs regularly in well-known and less traditional venues. “When I was playing at Fidelio Café, I found the audience really, really listening,” she says. In his opinion, bringing music to unusual places can bring greater understanding. Example: his performance with the Honeymead Ensemble – before the pandemic – in front of a theater set at the Tricycle Theater (now the oven) in Kilburn, north-west London.

“The set was a nuclear bunker with a reactor in the background,” she says. “We played Shostakovich’s String Quartet No. 8 and a chamber version of Strauss Metamorphosen, study for 23 solo strings. It’s a depressing program, but normally it wouldn’t make you think of nuclear devastation. Heard in the context of the reactor, however, it encouraged audiences to make a connection to total destruction.

For all the potential of small venues, however, she admits nothing beats the thrill of performing in a large concert hall in front of an attentive audience with perfect lighting, acoustics and production. Likewise, when moved to a venue that is not specifically designed to meet their artistic needs, classical musicians can feel like an afterthought. As Fiachra Garvey, Artistic Director of Classical Vauxhall says, “If you’re not careful, there’s a risk the music will become secondary to the place itself.”

It is therefore fortunate that Classical Vauxhall, Through the Noise and the Fidelio Café can afford to prioritize their artists, who all receive fees in line with those offered by larger and more established venues. Through the Noise covers its costs through bar tabs and a crowdfunding model that only allows each gig to go ahead once its goal has been met. The classic Vauxhall is largely funded by the area’s business improvement district, while tickets to the Fidelio Café, which also includes a three-course dinner, range from £50 to £125.

Will small venues be able to maintain their popularity beyond the immediate consequences of Covid? Soprano and composer Héloïse Werner, one of the performers of the noisenights series, thinks the musicians’ pre-Covid world tours will not return. “Why don’t you do more in your area and make the most of what’s around you?” she says. “It means you can stay home with your family and people you know can come see you play.”

Bazalgette hopes that eventually, venues large and small will be seen as staples of the classical music scene. “People have asked us, ‘Why are you tearing up traditional classical music and doing it differently? Do you hate him? I think there’s room for people to go listen to music in an edgy parking lot one day and go somewhere in costume the next. We’re not trying to lead some kind of rebellion.

Letter in response to this article:

Only £15 a gig and yes there is a bar! / From Alice Hills, Ilkley, West Yorkshire, UK