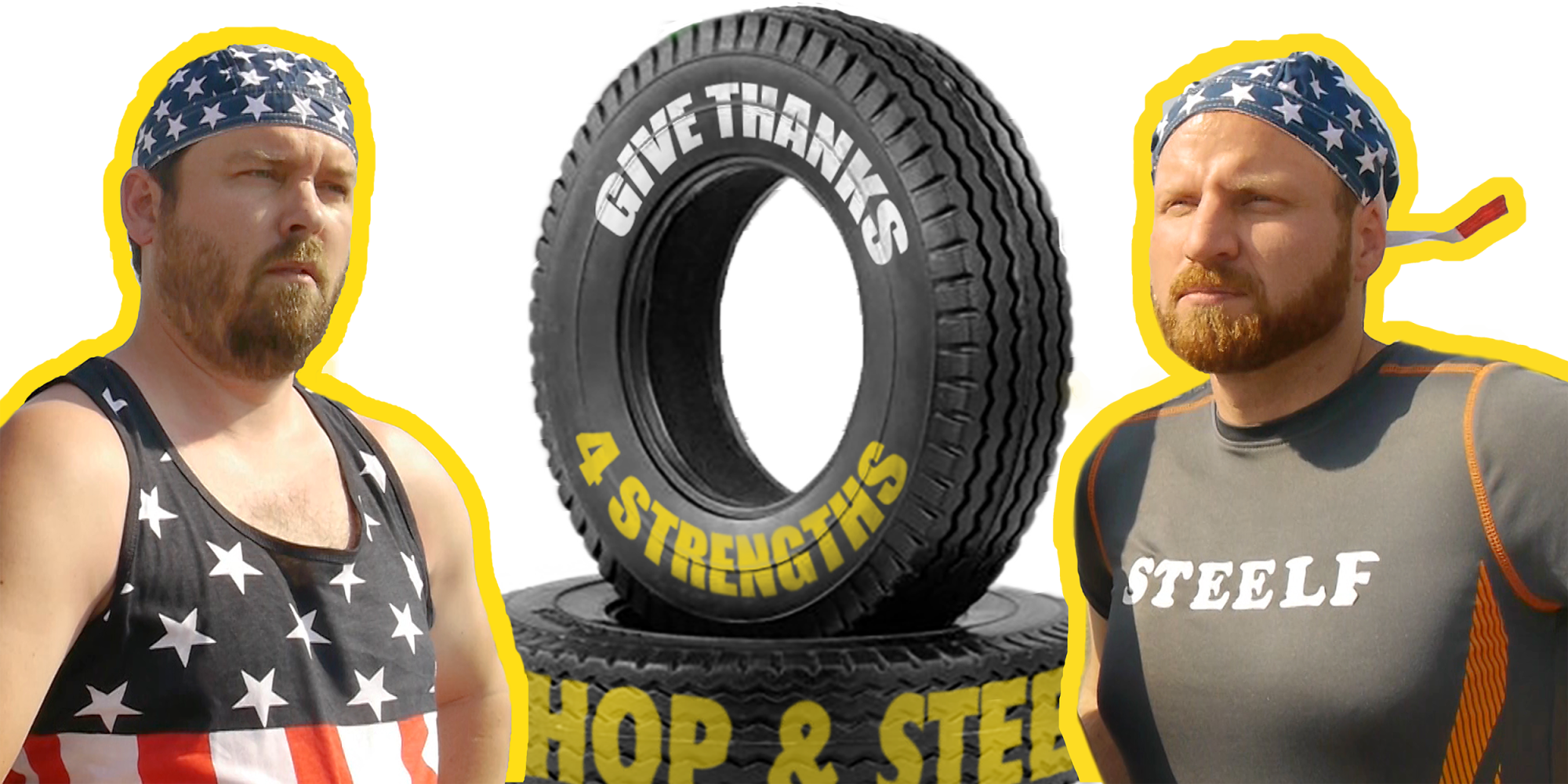 Chop & Steele is a documentary that gives thanks for the strengths

However, Chop & Steele is more than the art of finding and organizing Nick Prueher and Joe Pickett videos. It’s also the story of what happens when this pair takes to the airwaves and infiltrates morning news shows with a series of pranks and finds themselves the victims of a lawsuit. As much a story of friendship as of perseverance, Chop & Steele has a surprising heart for a movie that features grown men stomping on wicker baskets.

The documentary screens at Liberty Hall on Thursday, September 15, and we caught up with director Steinbauer and cinematographer Priest Fontaine Batten (both University of Kansas alumni), as well as Prueher of the Found Footage Festival, to discuss the film and how college towns made it all possible.

The pitch: Priest and Ben, you’re both KU alumni. Did you know each other during your stay at KU?

Ben Steinbauer: I knew Priest back then. Priest is a tough guy not to know. It’s like being with the mayor every time you hang out with Priest. He was famous for these epic parties that he threw and planned weeks in advance. One, in particular, that I always referred to was when he buried a bunch of televisions in the backyard, and he had these video installations.

I remember thinking about the party, after being probably like, six or seven Leinenkugels, “I can’t believe the amount of effort that has gone into this college party.” I think there were several wardrobe changes, and he was a DJ, and those are all things you can expect to see on September 15th.

Fountain Priest Batten: Yeah. I remember the cops came, and I finally had a ride, and they were so impressed. They’re like, “You know what? We’re just gonna leave this party alone. We’ve got a lot of noise complaints, but you guys put too much effort into this party, so we’re gonna let it go.

From what I remember, we started watching KU games together. And I just remember thinking, “These are the nicest people in Oklahoma. They’re the nicest, smartest people in town. I love these guys. I want to be friends for life.

Besides, I just admired Ben’s work from afar. Winnebago Man, obviously blew my mind, so it’s been a dream come true after all these years to finally, you know, collaborate on something. I did my thing in New York, so it’s nice to love connecting on this project.

This film also marks Ben working with Nick again, as you had previously worked with him and Joe Pickett on Winnebago Man.

Nick Pruher: When Ben walked up to us and said, “Hey, I’m making a movie about the angry RV guy,” we were like, “Well, we tried to track him down. Good luck.” Ben made the foolish decision to hire a private investigator to find him. It never crossed our minds. We were like, “This kid’s onto something.” I mean, Ben has about two years younger than us, but that kid’s got that moxie, I’m telling you.

We were impressed, above all, that Ben was able to infuse the documentary with something that we lack, namely the heart. So when we were in the middle of a trial and chatting with Ben, he just seemed like, “Hey, maybe this is a good opportunity for you to document this crazy time where our careers were on the line.” It was the genesis of the film.

Ben Steinbauer: Nick and Joe and I have been friends ever since Winnebago Man. I had followed their career, and they would come by Austin and play a show at the Drafthouse, and then we would meet up for a drink or something. We just stayed in touch. I was really fascinated by the pranks on the morning show, and then when the lawsuit happened, I think you contacted me right when the lawsuit was filed, basically. And that was the start of the film.

That’s when I was like, ‘Okay, pranks now have stakes, and there’s real substance here, and I have no idea what’s going to happen as a result .” For a long time it looked like it might be something where they were going to pull one last big prank or they were going to confront the man somehow, but what ended up happening was much more organic and truer and sweeter than anything that looked like a Borator one Yes man kind of approach.

Nick said you gave them heart, which they lacked, but Chop & Steele really shows the heart between you and Joe’s relationship and how you approach that stuff, Nick.

Nick Pruher: Yeah. It’s so natural since Joe and I have known each other since we were 10 years old. We don’t think about our relationship or what we do or anything, and the documentary almost forced us to step back and say, “Oh yeah, it’s kind of weird having a career with your childhood friend”, and “How do we navigate? We just don’t think about it, so it forced us – annoyingly – to face this for the first time.

The film shows your friendship, but what’s also fascinating about this documentary is that Priest and Ben met at KU, and then you and Joe met at the University of Wisconsin Eau Claire. It seems like a very nice synchronicity in all the relationships between the people who made this film.

Nick Pruher: Yeah. It’s also true. Maybe it’s not like that at KU but at University of Wisconsin Eau Claire we didn’t go to UW Madison which is like the big public school so other weirdos went to UW Madison. college with us, but you might do something ridiculous or dumb or start an intentionally bad break-dancing band and make waves.

If we had gone to NYU or Madison, even, it would have been considered kind of pat, but we could actually try some stupid ideas with very low stakes.

I think a lot of our creativity and the genesis of the Found Footage Festival really paid off in college because there just wasn’t much to do in our college town at the time. .

Well, you said that you came to this project because you liked the idea that there were stakes. These stakes play out on camera, and they are big, both legally and personally. How did all of you, as a very intimate group of people making this film, deal with the stress of all of this?

Ben Steinbauer: It was very similar to Winnebago Man that way where I honestly didn’t know what the ending was, and those are my favorite movies to make and watch. I love taking the audience on a ride and feeling like I’m in it with the filmmakers, and it’s really happening right in front of you. That’s how the movie was made.

We’ve had a lot of calls over many years about where the guys are at in their relationship and in their careers, and like I said, there were these ideas: maybe they’d go and pull these pranks more publicized and would deliberately come out and push the supporter and try to get sued again, and that could be the movie. Or were they really going to break up? There was just a lot of uncertainty around the movie the whole time.

These kinds of unknowns are very stressful during production, but I’m lucky to have created a production company with my friends, with Berndt Mader, who is co-director of the film, and then I work with people like Priest and Nick and Joe, and it gives me the ability to work very small and scrappy, but to be able to take creative risks like this. I think it shows in the movie.

I think it’s a unique way of doing things. It’s not the most lucrative way in the world to do it, and probably not the smartest approach, but I think in this case it definitely worked.

Chop & Steele screens at Liberty Hall on Thursday, September 14, followed by a performance by the Found Footage Festival. Details about this event here.