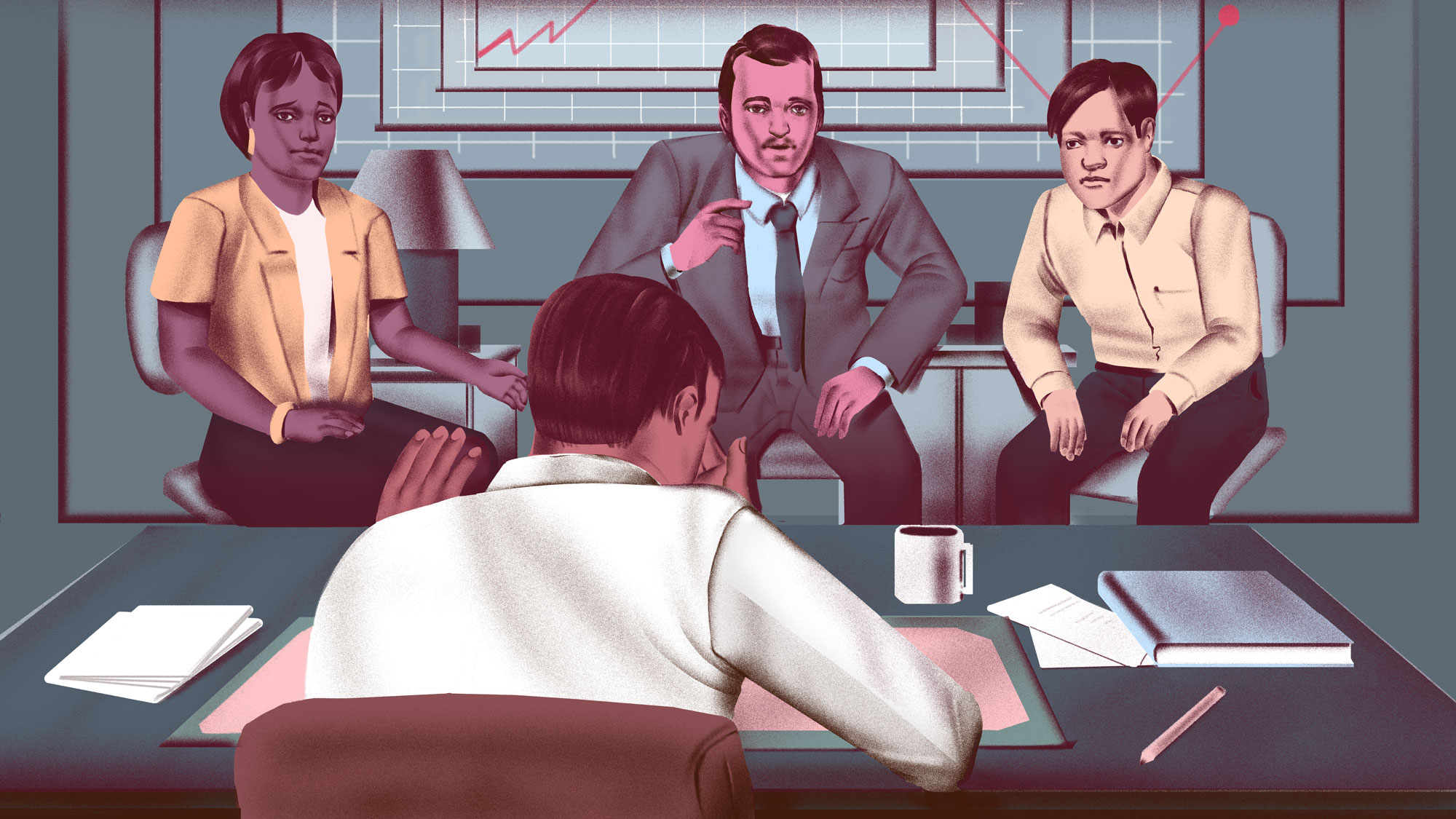 As executives rise to power, they are likely to become arrogant. They also, perhaps surprisingly, tend to become more fearful – they hate the idea that they might seem vulnerable or incompetent, and they become paranoid about the colleagues around them. This arrogance and underlying fear makes them less effective. The author shares a story from his own career to illustrate this point – a time when he felt stuck on what to do and foolish for feeling so. To his surprise, when he was honest about his confusion with his colleagues, they came to his aid. Three steps can help executives manage arrogant and fearful tendencies: get out of the C-suite, trust their colleagues more than they want, and pay enough attention to others.

For decades, we’ve told CEOs to be humble. It’s fine to be confident, even fiercely determined, we say, but arrogance will bring you down. The ideal leader respects and listens to colleagues, communicates honestly, adjusts opinions when faced with new evidence, and makes decisions that strengthen the organization rather than their own position.

The problem is that everything else in corporate life pushes CEOs in the opposite direction. To rise in the organization, executives must relentlessly focus on themselves. If they win the tournament, they acquire a power and a prestige that isolates them. Arrogance is almost inevitable, as is (somewhat paradoxically) paranoia.

When consultant Roger Jones interviewed dozens of CEOs and other senior executives, he kept seeing the same five core fears. They feared appearing incompetent, vulnerable, and foolish; they feared they were underperforming; and they feared political attacks from their colleagues. None of these fears involved the companies or organizations they ran. The leaders were caught up in themselves and their fears limited their effectiveness.

Jones’ findings struck me deeply because of a difficult experience I had over ten years ago. I had been a rising manager at Prologis, a fast-growing industrial real estate company (think warehouses for rent) in the S&P 500. In 2004, I became the COO, working closely with the CEO. Over time, however, we disagreed on the pace of growth and I resigned in early 2008. Then the financial crisis hit the company hard, the CEO resigned and the board m asked in November to return to take his place. Shortly after I moved in, our already fragile financial situation deteriorated further.

Things came to a head in a lengthy evening meeting with the CFO and his staff. Bankruptcy seemed inevitable, but I couldn’t bear the thought of abandoning the business I had helped build. Everyone was counting on me to make a decision – but I apologized for wandering off and clearing my head.

In fact, my head was spinning. I managed to grab a chair in another room before passing out. I quickly regained consciousness and returned to the meeting, but still had no idea what to say. All I could say was, “I don’t know what to do” and “I need your help.”

It was my worst nightmare – I felt incompetent, vulnerable and stupid. (Sound familiar?) But a remarkable thing happened. After a stunned silence, the CFO and other colleagues basically said, “We’re with you” and “We’ll find a solution.”

One way or another, we made it. Through a lot of diligence, creative thinking and luck, we bought enough time with creditors to sell some assets at a decent price and pay off the debt. Once stabilized, we set to work correcting the problems that years of growth had masked, especially a culture of deep mistrust. My willingness to say I didn’t know what to do at a key moment actually reduced people’s insecurities and reset expectations. It also freed me from my own fears, at least for a while. Over the next four years, we rebuilt the company to its former heights and more.

It wasn’t all smooth sailing – we laid off nearly a third of our workforce, which was painful in itself and also slowed the process of building trust. But when I retired in 2013, Prologis was solidly profitable and the largest company in the world in its sector.

I don’t recommend my ordeal of 2008 to anyone. If I hadn’t gained credibility with other leaders over the previous years, my vulnerability might well have exploded in my face. But I think CEOs and other senior executives can and should take steps to reduce arrogance and its underlying partner, fear. The key is to reset your emotions at work through “microclimates” – settings that are free from the pervasive ego effects that extend and threaten the ego of work. Here are three steps I recommend for not focusing on yourself.

The first is to get out of the C suite. I’m not talking about traveling, which usually boosts your exalted status. I wanted to have lunch with a non-executive employee at least once a week. Sometimes we talked about their role in the business, but mostly we talked about our families, weekend plans, and other pleasures. Neuroscientists have discovered that we can reduce our fears simply by talking to others. And non-managerial employees will not stimulate paranoia.

The second is to trust your colleagues more than you think. Too often what you think is wisdom is really arrogance and fear. In most cases where I intentionally chose to trust a colleague, it was the right decision. I got burned several times, but the goodwill I generated with this approach more than made up for the occasional short-term damage.

The third is to give people the attention they deserve. It’s a gift that also creates goodwill and rarely backfires. Not only does it pay off over time with easier conversations later on if things get stressful, but it subtly changes your frame of reference. Most managers aren’t shy about speaking their own minds, putting subordinates who think differently in a vulnerable position. I forced myself to listen before I intervened. This helped stimulate a wider range of ideas, which put us in a better position to succeed. And it took the attention away from me.

CEOs have many ways to improve their performance, from hiring coaches to changing strategies. But more important might be emotional: using disciplined practices to overcome the fears – and arrogance – that dampen their effectiveness.