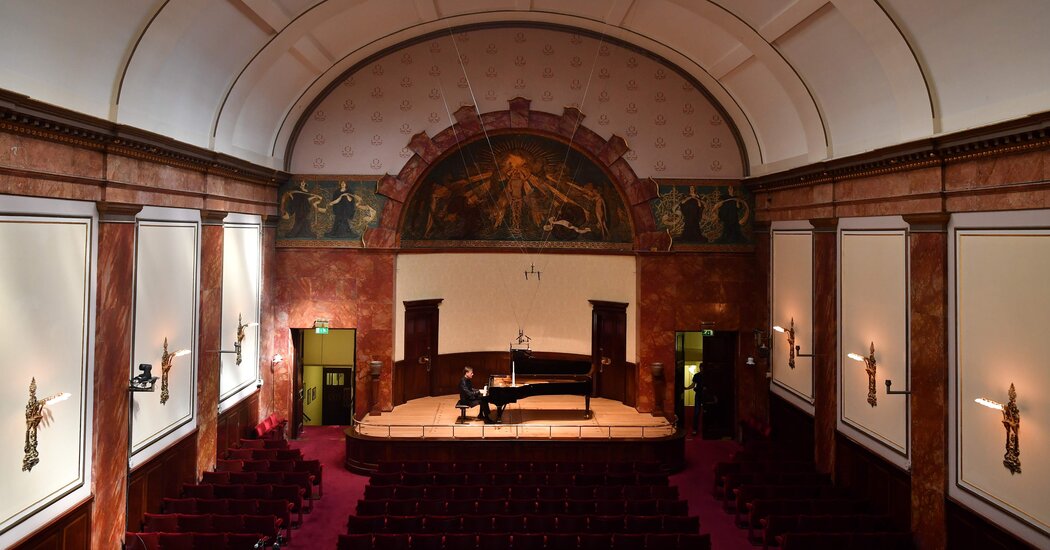 LONDON – â€œWelcome! Said John Gilhooly, General Manager of Wigmore Hall, standing in front of the small circular stage in the auditorium. The audience applauded wildly – for a crowd of chamber music fans.

It was May 23 and the first Sunday morning concert since the pandemic closed the hall last March. â€œI like to choose something special for each performance,â€ said Gilhooly, 47. “The Elgar Quintet you will hear today premiered in this hall on May 21, 1919, as the country was emerging from another major crisis.”

The Wigmore comes out of its last crisis with aplomb. As a pioneer of live-broadcast concerts at the start of the pandemic, he has won large dividends from goodwill and public donations. As many small performance venues in Britain nervously reopen after six months of forced closure, Wigmore Hall is confident to celebrate its 120 years with an ambitious program, starting from Sunday.

The hall has held a special place in the hearts of music lovers since 1901, when it was opened as a recital hall by German piano maker Bechstein, who had an exhibition hall next door. The discreet wooden doors under an Art Nouveau canopy that lead to the 540-seat room, with its plush red benches, marble, gilding and dark wood panels, are a portal to another era.

Arguably Britain’s most important chamber music venue, the Wigmore has an extremely loyal London audience who filled the hall for most of the more than 500 concerts a year it hosted before last March.

But even Britain’s most beloved concert halls and theaters have been in jeopardy since the start of the pandemic, with revenues reduced to zero, costs yet to be covered and concerns about the future on the rise. Live shows for small audiences opened briefly in the fall, only to close again in early December. The sites then remained closed until May 17, when they were allowed to open with limited capacity.

If all goes according to plan – and given the concerns about new variants of coronavirus circulating in Britain, that might not be the case – packed houses will be possible after June 21, according to Prime Minister Boris Johnson. Even then, most rooms will not open to full capacity.

“It has been a much longer and more intense struggle than any of us had feared,” said Gillian Moore, director of music at Southbank Center, a performing arts complex in London. â€œThe economics are really tough, but we can’t immediately reach a full audience because we have to see how everything will work out logistically. “

Gilhooly, who was born in Limerick, Ireland and trained as a singer there, became the executive director of Wigmore Hall at 27, and then its managing director five years later. And while he might not sound like a risk taker, throughout the pandemic he has been instrumental in bringing musicians into the hall – many of whom are famous, but some less well known. – and daring in its programming.

From last June, Wigmore Hall featured free daily concerts from the empty hall, broadcast live by the BBC. Over the past year, thanks to the openness and lockdown, the Wigmore has aired 250 programs by 400 artists, including top London-based artists like Mitsuko Uchida, Iestyn Davies and Stephen Hough. The concerts have been hailed by classical music lovers as a beacon of light in a dark time.

â€œPeople have written to me from all over the world,â€ said Hough, whose opening recital on June 1 garnered around 800,000 live views. “The return of live music was a symbol, as Myra Hess giving concerts at the National Gallery during World War II.”

The Wigmore was able to get started faster than most because Gilhooly and his board invested in sophisticated cameras and recording equipment in 2015, when they started broadcasting a concert every month. It was a quietly progressive step for an organization that exudes an air of stilted tradition, and last year’s decision to broadcast free concerts is even more so.

The Wigmore receives a Â£ 300,000 grant from the UK state, but raises most of its own Â£ 8million, or around $ 11million. It makes just over half of its revenue from the box office (when there’s no pandemic) and most of the rest from fundraising.

“The Wigmores have been fantastic leaders in terms of online activity,” said Kevin Appleby, director of the 350-seat Turner Sims concert hall in Southampton, England. “But there is the inevitable question of how you monetize it.”

â€œDo you keep the model online? A hybrid model? Appleby added. “Won’t some of the public, especially the elderly, come back if they can watch at home?”

Gilhooly said that while the concerts that were broadcast live were free, they brought money and attention to the venue. The recitals had around seven million views online from around the world, and grateful contributions poured in: ‘Â£ 1million in Â£ 20 increments, and a few more sums from individuals and foundations,’ said Gilhooly. The number of paying members of the Wigmore Hall has increased from 10,000 to 15,000, and its mailing list now has 400,000 people.

That growth has not been hampered, Gilhooly said, by more adventurous programming, including the work of little-known black American composer Julius Eastman and concerts by contemporary music groups like the HermÃ¨s experience and Riot kit. â€œI lost the fear of people who oppose more experimental programs because I didn’t have that direct contact with the audience,â€ he said, adding that the regular subscribers he considered musically conservatives often loved these concerts.

To mark the hall’s upcoming anniversary, Gilhooly recently announced the appointment of nine new associate artists, including violists, saxophonists and performers of the sarod, an Indian string instrument. He also presented plans for a series of concerts focused on African music.

â€œIt introduces audiences to new musical worlds, which takes knowledge, courage and vision,â€ said Gweneth Ann Rand, a soprano who is one of the new partners.

Yet none of these innovations and successes will necessarily shield Wigmore Hall from the uncertainty surrounding the future of the performing arts in post-pandemic Britain. As Angela Dixon, Managing Director of Saffron Hall, a 740-seat concert space in the south of England, put it: â€œYou end up spending money to be openâ€. Social distancing rules mean Saffron Hall can only sell a fraction of its seats.

â€œWhen you rely on people buying tickets for half of your annual expenses, you can’t afford to let people forget about you,â€ she said.

Gilhooly said his main audience was mostly vaccinated and returned to concerts in person. (Due to social distancing, demand now exceeds availability and tickets are allocated by ballot). But he acknowledged that if the June 21 opening is pushed much further, classical music in Britain will be in trouble. “There has already been so much suffering in the industry,” he said, “especially for freelancers who have fallen through the cracks.”

For the start of the 2021-22 season at Wigmore Hall in September, Gilhooly said he has â€œA, B, C and D scenariosâ€.

â€œThe best of times for the future,â€ he said, â€œis that we open on September 1 with packed theaters and a really ambitious eclectic season. Our stage is a tiny space, but a place where I can. imagine big ideas.