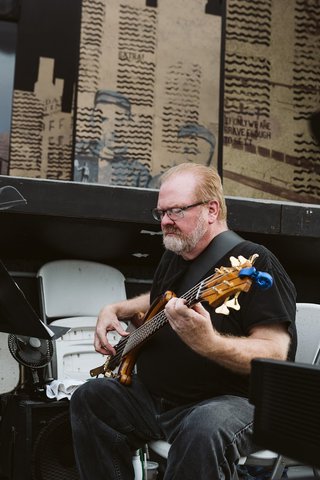 Barton at Fort Leavenworth Music Instructor Colvin Hooser spends most of his days educating his students on everything from fundamentals to the history of rock and roll, but in his spare time this summer he was able to volunteer as a member of the pit orchestra for KC-area’s “Theatre in the Park” organization as bassist and guitarist.

“I think it’s a great way for us to build relationships,” she said. “Barton is here because of our local community, which is not just Fort Leavenworth but extends across this whole part of the state, so any chance we have of contributing in some other way outside of our campus is a positive thing.”

Hooser said he enjoys giving his time to the community by contributing to such rewarding and fun media. He performed in two shows this summer, “Curtains” and “Newsies.”

“Musical theater interests me because of the skills involved and how the musicians fit into the process,” he said. “The ability to be flexible and keep up with the music director as they follow the action on stage can be as challenging as the music itself.”

Hooser has always been connected to music.

“After my childhood career dreams, music is the one thing I’ve always wanted to do,” he said. “I’ve been blessed to be part of the music industry for most of my adult life in a variety of ways, including performing, arranging, composing, working in recording studios, designing and installing sound systems, selling and repairing.Even when I thought about quitting music, an opportunity presented itself that made me recoil.

Hooser said acting is an exciting and fulfilling activity.

The best part of performing is when the whole, whether it’s an instrumental group or the cast of a musical, becomes greater than the sum of its individual parts,” he said. declared. “You can physically feel the ‘lift’ of the energy, which is amazing in rehearsal, but mind-blowing in performance.”

Hooser will soon be back in action and has made a name for himself as one of the many shining stars in Barton’s music department.

“I enjoyed my teaching and performing experiences at Barton,” he said. “I especially enjoyed the opportunity to perform with the faculty and students at the Great Bend campus. I look forward to performing again with other faculty at the faculty recital on September 16th.

Theater in the Park takes place at Shawnee Mission Park in Shawnee Mission and celebrated its 52nd season in 2021. With nearly 35,000 people attending each year, the organization has been hugely popular for many years and attracts people from all over the Johnson County and Kansas City. areas. For more information about Theater in the Park, visit theatreinthepark.org. For more information about Barton Community College in Fort Leavenworth, visit fl.bartonccc.edu.