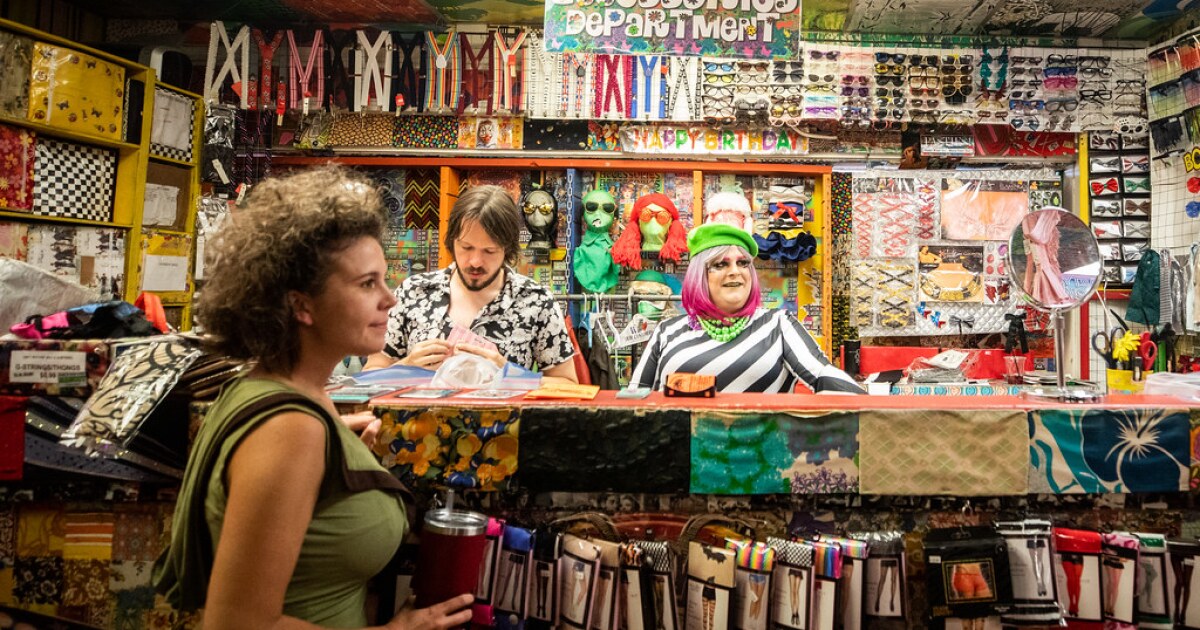 A giant Pikachu. The head of each ninja turtle. The four Sgt. Pepper uniforms. A fancy box of whiskers. A case of glittering eyelashes.

For the past four decades, there’s been one place in Austin where people could find all those oddities: Lucy in Disguise with Diamonds.

“I would describe her as the coolest aunt you have – that’s her closet,” says Jerry Durham, manager of the iconic South Congress store. “And she’s also really into Halloween.”

The year-round costume shop offers everything from superhero and Disney costumes to vintage clothing and custom-made one-of-a-kind pieces. Shoppers sift through the colorful maze of taffeta, sequins and faux fur for all sorts of reasons: birthdays, murder mystery parties, stage performances and, of course, Halloween.

But come October, the vibe at Lucy in Disguise is bittersweet. A large banner above the entrance lets you know that the store will close at the end of the year. As groups of people walk past, they point and say something like, “Did you hear Lucy’s is closing?” What a pity.” Inside, customers browse the shelves, hoping to buy one last Halloween costume before the store closes for good.

Now, the story behind that closing doesn’t fit into Austin’s increasingly common “rent is too high” narrative. The store’s owner and founder, Jenna Radtke, actually owns the building. There were a number of factors that led to the decision to close and sell the space, Durham says. For one thing, many of the costume companies the store relies on have gone bankrupt during the pandemic.

“It looks like it’s going to be even harder to get those unique items and even harder to prevent the store from starting to look like a Spirit Halloween,” Durham says, referring to the seasonal costume chain. “We never wanted it to just be a store full of the same costumes you can buy anywhere. We wanted it to be something beyond that, and it’s gotten harder and harder over the last few years.

He also points out that the Southern Congress is changing. Parking has become more difficult and the store predicts it will only get worse as Austin builds its public transit over the next few years, including a possible light rail line on the popular street.

“It seems really hard for us to imagine being able to support the company through all of this,” he says. “You know, if someone comes in and rents, say, one of our giant Pikachu mascots, but they can’t drive here because there’s no parking here, will you he take this thing on a train? Like, what are they doing at that time? So it’s just a lot of different challenges like that.

Durham says the store would rather leave while “everything is fine, rather than waiting and struggling to get out”. For many, however, the closure feels like the loss of an Austin institution.

A few days before Halloween, Tara Morris, a born and raised Austinite, took her two young sons there to pick out a costume. The store opened the same year Morris was born, so he’s been there for as long as she can remember.

“It’s been a landmark in Austin for so long, and it’s really sad to see it go,” she says. “For me, Lucy’s is just as much an Austin tradition as going to the Zilker Tree.”

It had been a few years since she had visited the store due to the pandemic, but she wanted to bring her sons there for this last Halloween. Seven-year-old Sonny wanted a knight costume to match that of his younger brother Scout. It didn’t take long to find the perfect one – but that’s no surprise.

“I think Lucy’s story has always been: you know we’ve got it all,” says store manager Emily Hicks. “And we always have such a creative styling team that we can take pieces the client might never have thought of and then create the look they’re going for.”

These days, however, costume stock is starting to run out. In a social media post in August announcing the impending closure, the store said the costumes, which are normally available for rent or purchase, would only be available for purchase in the future. The post sent a gaggle of regulars to the store to pick up a piece of Lucy before it was completely gone.

“August is normally a pretty sleepy month for us, and August has been a crazy month this year,” says Durham. “I think we kind of underestimated how quickly people would act to try and get coins removed and purchased.”

Owen and Jodi Egerton were part of that herd. The couple have been going to Lucy’s for decades – for pleasure and for work. Owen is one of the people behind the Master Pancake Theater shows at Alamo Drafthouse, and Jodi works with Typewriter Rodeo. They have both relied on Lucy over the years for costumes for their respective events. And, rather than going out for ice cream or taking a trip down to toy history, they would treat their two kids to trips to Lucy’s when they were kids.

When the couple heard the news that the store was closing, they made a pilgrimage there accompanied by their teenagers. They thought they’d take home a souvenir – a mask or maybe a cool pair of sunglasses. But instead, something happened that often happens inside Lucy in Disguise: you walk in with an idea of ​​what you want, but then you get inspired and walk away with something completely different.

“We saw four life-size Fraggle suits hanging from the ceiling,” Owen recalled with a laugh. “And we knew what purchase we were making that day.”

Jodi says she’s sad to think the store isn’t there anymore, but at the same time, the closure feels a bit inevitable as Austin continues to evolve.

“It’s not super surprising, I guess,” she said, “but it seems like anything that ends up in this space is going to have some pretty wild, like, energetic, magic imbued into the walls, because a lot of wonderful things have happened in this building.”

Having worked at Lucy’s for the past 13 years, Durham has seen a lot of that magic up close. A few Halloweens ago, he was working in the store dressed as Ginger Spice when a woman with a British accent approached him and asked if she could take his picture. He said yes. It took him a few moments to realize the woman was Geri Halliwell, Ginger Spice herself.

“She had just happened to be in the store on Halloween day while I was wearing the dress she made iconic,” he says.

Durham says the store closure has yet to fully materialize for him. He says he will miss this place, which has long been a safe space where he could dress and be perceived as he wished. But he doesn’t want people to see the store closing as a sign that Austin has lost its weirdness.

“At the end of the day, it’s the people here who have kept us in business for so long, and it’s the creativity of the community and the community’s desire to look good while they party that keeps us going. kept alive,” he said.

Durham says he hopes people will keep that creativity going.

“We don’t want anyone to think, ‘Oh, with Lucy closing, that’s it, I don’t want to be here anymore. I can’t let my weird flag fly anymore,'” he says. to keep your weird flag flying. Take the color lessons and all that [you’ve] learned from Lucy and take her out into the world.