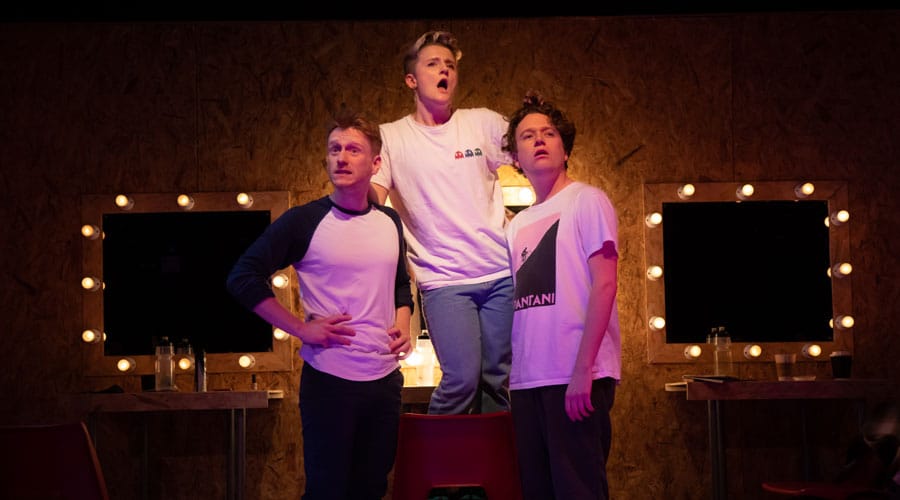 Tim Hochstrasser reviews Another America, a new play by Bill Rosenfield which is currently playing at the Park Theater in London.

Bill Rosenfield’s timely and uplifting new play arrives at the smaller of the two Park Theaters with a positive message about America that lies beyond the partisan Beltway and divisive electoral polarization. It takes its starting point from Dan Austin’s documentary true fans which traced the story of three young men (two brothers and a best friend) who, in the late 90s, decided to spend 100 days cycling 4800 miles from Venice Beach, California to Springfield, Massachusetts. Their goal was the Basketball Hall of Fame to honor their love of the game and support for one team in particular, Utah Jazz. People encountered along the way must sign a basketball, the talisman of their quest, to be left at the end of the journey.

The question immediately arises: why the need for a play when a documentary already exists? The answer lies in the skillful way in which Rosenfield uses the “road movie” and pilgrimage format to not only explore the hopes and fears of the three travelers, but also to present a wide range of characters from ordinary American life that they encounter along the way. Some are kind and helpful while dispensing house wisdom, a few are sinister, and many are troubled, confused, or downcast by life’s problems. In fact, as the piece progresses, its true subject emerges as the America that exists under the radar, which is touched by the bold acrylic brushstrokes of politics and social dislocation but never fully defined or imprisoned by her. The ultimate message is that there is still plenty of confused, well-meaning, complex humanity that can never – thank God – be captured or entirely defined by stereotypes.

For this positive but never sentimental tone to pass, it takes virtuoso work by the three actors on stage, who alone must project 36 characters over the entire duration of the action, with very few props and a minimalist decor. There is a lot of text and a huge amount of legislative texts to pass. Key to the production’s success, then, is the ability of these three young players to compete against each other so well while also generating such a fine gallery of individual character studies. Each of the performers must travel across gender, race and age, generating a range of American accents along the way. It is to their credit that they do so so convincingly, transparently and with panache.

A short review can’t illustrate this variety of characterization in detail, but I was particularly taken by Marco Young’s depiction of a brooding teenager and conflicted, frustrated salesman; Jacob Lovick’s incarnation of a disillusioned elderly parent, isolated by poor life choices; and Rosanna Suppa’s evocation of a benevolent and eccentric granny also wandering the country. It’s beyond their demonstration of bonding and fracturing between siblings and pals and growing their individual characters as they come to terms with and understand what they’re moving away from, and how to ‘roll’ until they find what they are looking for. .’

The program gives limited insight into the creative team, but credit goes to director Joseph Winters whose experienced hand varies the pacing of the action and ensures there’s always visual interest and a variety of moves, even in long soliloquies and rest points. The lighting and sound systems add dramatic interest without being distracting, and the set design (uncredited) gives the actors plenty of space while providing enough props and framing to support them.

Until a broadcast begins, it is often difficult to determine how much exposure an audience needs and what can be left behind. My only real criticism would be that with a running time of 2 hours (plus interval) a bit of judicious pruning could be beneficial, especially in the long first half where the flashback technique is perhaps used a few too many times.

However, it is a finely crafted, life-affirming and generous piece with a terrific performance package that fully deserved the rich appreciation afforded by the press night crowd.

Another America runs at the Park Theater until April 30, 2022