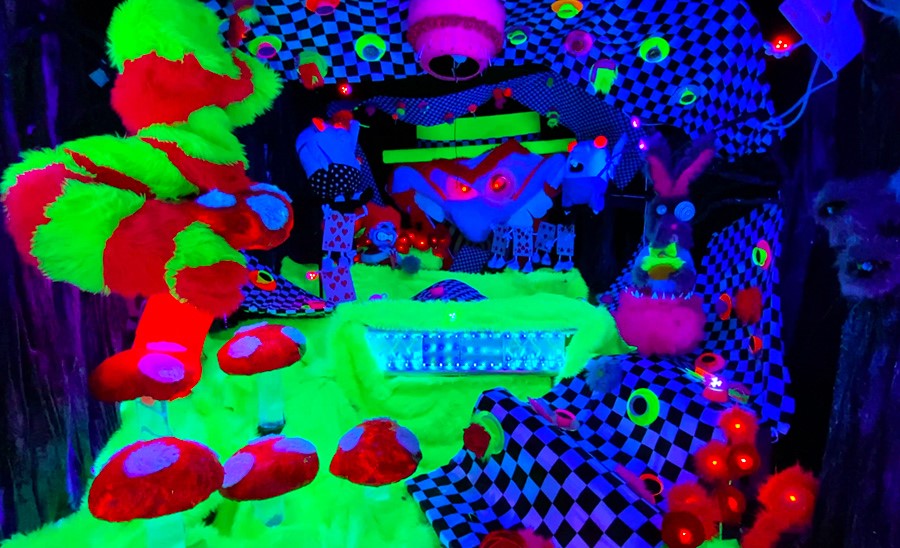 Bang in Wonderland! Bang! The Electric Shooting Gallery is now open at 132 F Street in Salida

The Queen, Tweedledee, Tweedledum, the White Rabbit and others have taken up residence at the back of Corvus clothing and curiosities in Salida and are ready to engage the curious of all ages with a 300 square foot electric, glow-in-the-dark “shooting” gallery.

Electric shooting galleries are popping up all over the country, but there’s no need to travel long distances to an expensive theme park or catch up with a traveling carnival, as it’s right in the historic city center of the creative district of Salida.

The meanings and metaphors of Lewis Carroll’s 1865 classic “Alice in Wonderland” still make one guess what the author may have intended. “Alice” continues to appeal to children and adults alike and is often referenced in pop culture. Madrigal and Blake associated with this commonly used rendition as one of the inspirations for their theatrical arts installation: “Following the White Rabbit means following an unlikely clue and getting in the middle of an extraordinary situation.”

Visitors can enter quarters worth a dollar, pick up a shiny fur-lined “blaster” and experience the bright colors, black light and futuristic sounds of a highly engaging interactive art installation.

As Madrigal explains, you’ll get 15 tries for every dollar to test your skills as you aim your laser beam at one of the clusters of three LED-illuminated, colored lights. Each color is worth different points and to increase the fun, the game is ‘conditional’. In other words, “Some targets open up and reveal other targets or move something else; it depends on where you are aiming and what you are doing. she says.

If your aim is true, you’ll get positive, audible feedback, which reveals further opportunities to increase your score as you try to follow the cleverly designed, electronically animated puppets through their world.

As Blake defines the beginning of a single scenario: “Tweedledee hits the ball. It flies across the sky to Tweedledum as the ball, hit back and forth, flashes like another target.

“These targets aren’t static like in many arcade games,” Blake explains. “Our design changes it and makes it harder to hit. The “puppet bunny” in the tree has a target in its hand while it jumps up and down. Here, with no time limit, you can look and see what is going on, then try to map out a strategy”.

Blake noted “there are channels on YouTube dedicated to people looking for weird roadside attractions. This just might be one of them.

“We’re hoping some people will be drawn to Salida just to do the circuit,” Blake said. “It’s a small way to wave a flag and have one more reason for people to come and visit.”

The couple invite visitors to come often to work on your personal best score or challenge your friends for bragging rights, one-on-one. Participants aren’t working against the clock, so it’s all about being in the moment and enjoying a bit of fantasy. It can be a great way to spend time after school, on Fridays or while waiting for a table at Amicas.

For the older gamer, Wonderland Bang! Bang! is a chance to leave the real world behind and “reset” after a long day at work. (According to Madrigal, during their soft launch, people between the ages of seven and 50 seemed very excited about the new attraction.) It can also be a spur of the moment; hiding to seek shelter from a wind or rainstorm at the end of the day or simply to see what’s new in the store.

Animatronics is a form of robotic animation created by Walt Disney Imagineering years ago for shows and attractions at Disney theme parks, and later developed and used by other companies.

Corvus’ animated “robot puppets” are part of a computer-server driven system. Blake and Madrigal bought the “guts of the system” from owner Daniel Zepeda of Electronic Shooting Galleries LLC, now in Morelia, Mexico. The couple then used their theatrical background to make it unique and more sophisticated than the company’s pre-packaged systems could offer.

There are currently 16 sensor-driven targets with more to come. The “flowers” of the set are directed by an automaton to make them move as Blake intended. The gallery covers nearly 300 square feet, with a rich depth of field, created by multiple visual and theatrical artifices. While seeing it in person is the best way to appreciate the latest stage creations, there are a few nods to past traditions.

Blake explains how visual illusions help deceive the eye: “In early Victorian theatres, puppet theatres, as well as in vaudeville and early opera productions, people used steeply angled stages, multiple platforms , layers and stairs to give the illusion of depth in a narrow box.

“An example is how to create the movement of waves in the ocean. By moving wavy vertical banners in opposite directions, your mind ‘sees’ it as waves, pulling you in. In our gallery, in addition to moving the backdrops, we also use different dimensional scales and visual patterns to create the illusion of close-up vs distance.And of course, good lighting is essential.

Another local artist helped inspire the concept of the creatures based on character sketches. Using repurposed fibers and materials, Madrigal added chewed fiber and finished the characters’ personalities using his experience as a costume designer.

About Corvus Clothing and Curiosities

For nearly seven years, Corvus Clothing and Curiosities has provided a unique experience at 132 F Street in Salida. Blending retail, costume design and a theater background is what makes Corvus unique.

Owners Tamar Madrigal and Brandon Blake said they want to branch out and complement the already well-served local market for children’s toys. With “off the wall” gags and quirky stuff aimed at an older demographic, both locals and visitors, high schoolers (and even their parents), there’s something for everyone.

Tamar Madrigal attended Texas Tech acting school and she and Brandon Blake worked in the Art Deco style Georgetown Palace Theater near Austin, Texas. Madrigal has made costumes and props for musical productions and children’s theater. Blake designed and produced the visual graphics and stage design for the theatre. 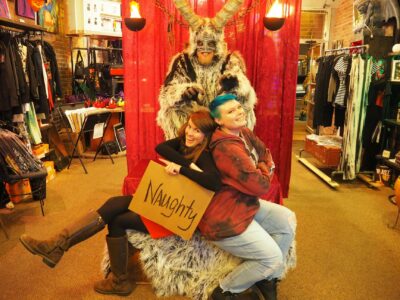 Krampus tries to ensnare “naughty” adults in addition to his usual young targets at Corvus Clothing and Curiosities in 2019. Courtesy Photo

Masks, games and novelties are also available. Halloween is a major seasonal event, as is the annual holiday visit of Santa’s polar opposite “Krampus”.

Half goat and half demon, Krampus is one of the companions of Saint Nicholas in parts of Europe, including Austria, Bavaria, Croatia, the Czech Republic, Hungary, Slovakia, Slovenia and northern Italy, including South Tyrol and the province of Trento.

During the Christmas season, Krampus punishes naughty children, acting as a sort of alter ego of Saint Nicholas, who traditionally rewards well-behaved children with gifts.

Krampus is scheduled to appear in Corvus this year on “Black Friday”, November 25th.