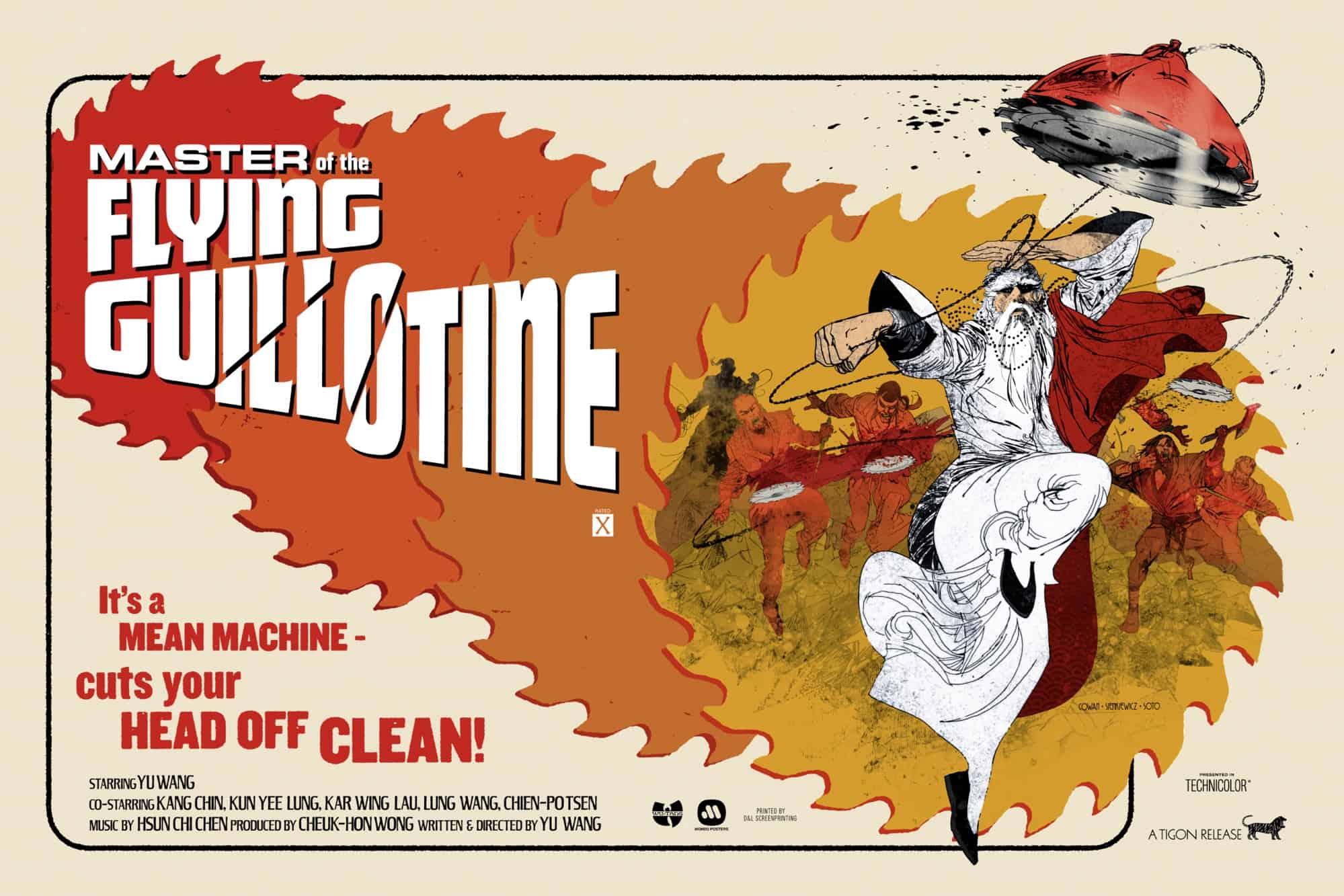 A new legend is born in the land of Shaolin. On Saturday, August 20, Alamo Drafthouse Cinema, an Austin-based cinema and restaurant, will screen the first film in its new weekly series of martial arts films – RZA’s Saturday Shaolin Theater. Wu-Tang Clan founder and famous kung fu movie fanatic RZA personally curated the first set of titles, starting with the theater bar’s namesake, MASTER OF THE FLYING GUILLOTINE. The launch of the series will be marked by the release of an exclusive MONDO poster, featuring custom artwork inspired by MASTER OF THE FLYING GUILLOTINE created by Bill Sienkiewicz and Denys Cowan. The poster will only be available for in-person sales at Alamo Drafthouse Staten Island.

“The mythology and spirit of the Wu Tang Clan grew out of the experiences of RZA growing up on Staten Island,” says Tim League, Founder and Executive Chairman of Alamo Drafthouse Cinema. “Weekend trips on the ferry to Times Square kung fu screenings and Saturday afternoon marathons of Shaw Brothers movies on WNEW channel 5’s Black Belt Theater were crucial ingredients in the mix. We are thrilled to bring the tradition of Saturday kung fu back to life at our sanctuary of martial arts cinema, Alamo Drafthouse Staten Island.

Following the series premiere, upcoming titles for RZA’s Saturday Shaolin Theater include: ENTER THE DRAGON with Bruce Lee; THE HEROIC TRIO with Michelle Yeoh, Maggie Cheung and Anita Mui; CHESS BOXING MYSTERY with the OG Ghostface Killer; THE INVINCIBLE ARMOR; FATAL FLYING GUILLOTINE, prequel to the original (which itself was a sequel to ONE-ARMED BOXER); plus a full month of Jackie Chan with DRUNKEN MASTER 1 & 2 and POLICE HISTORY 1 & 2.

“Alamo Drafthouse has created something really special here on Staten Island,” says RZA. “It’s great to work with a company that has the same passion for martial arts cinema as I do.”

Since opening its doors on Friday, July 22, Alamo Drafthouse Staten Island has seen an outpouring of support and enthusiasm from the Staten Island community. New releases such as director Jordan Peele’s NOPE have drawn strong attendance in the theater’s first few weeks, while exclusive programs such as RZA’s Shaolin Saturdays will continue to provide a unique cinematic experience for guests.

Like the carefully curated exhibits of century-old wax figures in Alamo Drafthouse Downtown Brooklyn’s House of Wax and the vast archive of more than 60,000 letterpress movie advertising plaques adorning the walls of the Alamo Drafthouse press room. Lower Manhattan, Flying Guillotine will feature posters and memorabilia spanning the history of kung fu cinema.

In addition to a wall of 45 beers on tap, patrons can enjoy two unique sections of the cocktail menu: Shaolin, with nine classic cocktails, and Wu-Tang, with nine original craft cocktails designed by bar manager Vincent Favella. , formerly of Brooklyn’s House. de Wax and The Press Room in Lower Manhattan. Flying Guillotine also includes a giant 16-foot flying guillotine above the bar entrance and a photo opportunity. Any purchase at the bar gets you a token for the exclusive Flying Guillotine claw set, and there are exact replicas of the three different flying guillotines (designed by Pretty in Plastic) used in all the flying guillotine movies. For more information about Flying Guillotine, visitflyingguillotine.com.

About the Alamo Drafthouse Theater

Founded in 1997, Alamo Drafthouse has been hailed for its unique programming events, excellent food and beverages, and high exhibit standards, earning accolades such as “Best Theater Ever” by Time Magazine and “The Coolest Theater in the World” by Wired. A September 2018 Market Force Information survey of nearly 13,000 moviegoers nationwide gave Alamo Drafthouse the No. 1 ranking for favorite movie theater, best service, and all food and beverage-related categories.

Alamo Drafthouse offers a unique combination of theater and restaurant, showing first-run films, independent films and special events with a full menu made from scratch. Guests order all food and drink from waiters who quietly tend to it throughout the film from inside the theater. Guests are encouraged to arrive early to enjoy pre-show entertainment. Instead of a barrage of ads, Alamo Drafthouse shows a curated collection of rare and humorous clips themed around each feature.

Additionally, Alamo Drafthouse protects the theater experience with a zero-tolerance policy for people who disrupt the movie by talking or texting. Alamo Drafthouse’s “Don’t Talk” public service announcements have frequently garnered national attention and have featured former Texas Governor Ann Richards, Jeff Goldblum and a velociraptor, IT’s Georgie, the director and star of THE ROOM Tommy Wiseau, and a very angry voicemail.

World Premiere of ST. SEBASTIAN by Andrew Kramer will be presented at the Den Theater in September