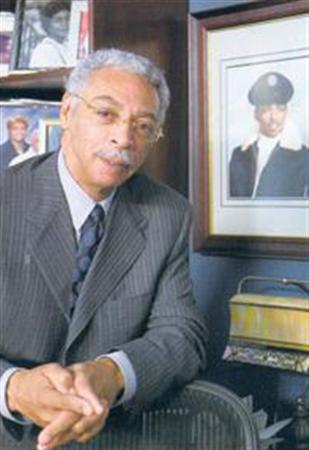 BIRMINGHAM, Alabama (Reuters) – Federal authorities on Monday arrested the mayor of Birmingham, Alabama, as part of a corruption probe into a sewer debt that could lead to the biggest municipal bankruptcy in history the United States.

Authorities arrested Mayor Larry Langford in Birmingham at 7am (1200 GMT) and charged him with 60 counts, including bribery, money laundering, conspiracy and producing false statements of income, according to US attorney Alice Martin.

Langford was charged along with investment banker William Blount and lobbyist Al LaPierre on a total of 101 counts. The government said it was also seeking to confiscate $7.6 million from the three men.

Birmingham is the largest city in Jefferson County, Alabama, which is battling to avoid bankruptcy over what is now a $3.2 billion sewer debt.

Langford, a Democrat, was head of the Jefferson County Commission at the time it engaged in floating rates, auctions and bond swaps to raise money to improve its system of sewers.

“He sold his public office to his friends Blount and LaPierre for about $235,000 in expensive clothes, watches and cash to pay his mounting personal debt. Throughout that time, Blount received fees exceeding $7 million,” Martin said.

“Through a network of funding agreements, Langford has asked many institutions to use Blount as a consultant so that Blount will make fees and in turn reimburse Langford,” Martin said at a press conference. , adding: “It was a classic pay-to-play system.”

Langford’s office said the arrest was “not a surprise”.

“We are happy that the mayor finally has his day in court. As members of his team, we support him and look forward to the day when we can put the focus back on the important issues facing the city,” Langford Chief of Staff Deborah Vance-Bowie said in a statement. a statement.

In May, the United States Securities and Exchange Commission filed a lawsuit accusing Langford of receiving and failing to disclose an illegal payment of $156,000.

Langford served on the Jefferson County Commission from 2002 to 2007 and served as its chairman. He became mayor of Birmingham in 2007.