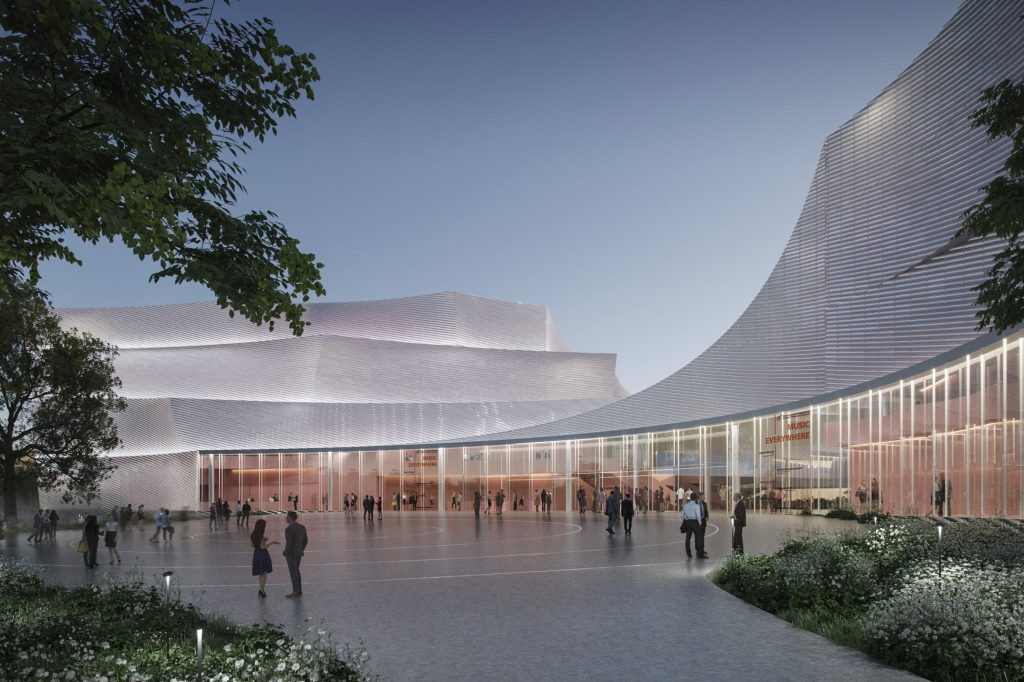 The 20,000 m² concert hall will be built in the Serbian capital’s Ušće Park, next to the Danube, and is billed as “the first of its kind in the Balkans”. It will house performance, rehearsal and creation spaces as well as the main symphony concert hall with a capacity of 1,600 spectators and an orchestra and choir of 400 people.

The year-long international competition was led by the United Nations Development Program (UNDP) on behalf of the Serbian government in partnership with the Prime Minister’s Office, the Ministry of Culture and Information, the City of Belgrade and the Belgrade Philharmonic Orchestra.

A total of 37 bids were received from 15 countries for the historic program described as “the biggest cultural investment in the region for decades”.

The competition’s international jury included architects, concert hall experts, representatives of the organizing bodies and Arup, which prepared a feasibility study for the concert hall in 2019.

Amanda Levete, Director of AL_A, said: “You couldn’t ask for a better site than this to convey Serbia’s vision for the future.

“The beautiful setting of Ušće Park, on the banks of the Danube, sends a powerful message about the transformation and redevelopment of our cities into greener and more beautiful spaces.”

She added: “The [project] will be an expression of harmony between nature, architecture and music, at a pivotal point in Europe where east meets west. It will be a place where people from all backgrounds and cultures, of all ages and abilities, come together to revel in music of all genres.

Acting Director of the Belgrade Philharmonic Orchestra, Darko Krstic, said: “Many years ago, with tireless and fearless enthusiasm, our former and dear director Ivan Tasovac, embarked on a dream of many decades: to build a magnificent home for the Belgrade Philharmonic Orchestra, the main orchestra in the region, creating an internationally renowned center for music, a regional center for culture and the arts, and a new symbol of Belgrade and Serbia.

Krstic said AL_A’s design not only “celebrates the uniqueness” of the orchestra, but would also provide “an accessible, special and attractive place for social gatherings in the Serbian capital – a place that celebrates the way of life of Belgrade as a European metropolis and a new home that the Belgrade Philharmonic Orchestra deserves.

The AL_A team, which will receive around £7.8million in fees, includes landscaper VDLA and local architect Zabriskie. Arup will continue his role as acoustic and theatrical designer.

According to the Belgrade Philharmonic Orchestra website, the design is expected to be finalized early next year. The construction program will then take up to five years.