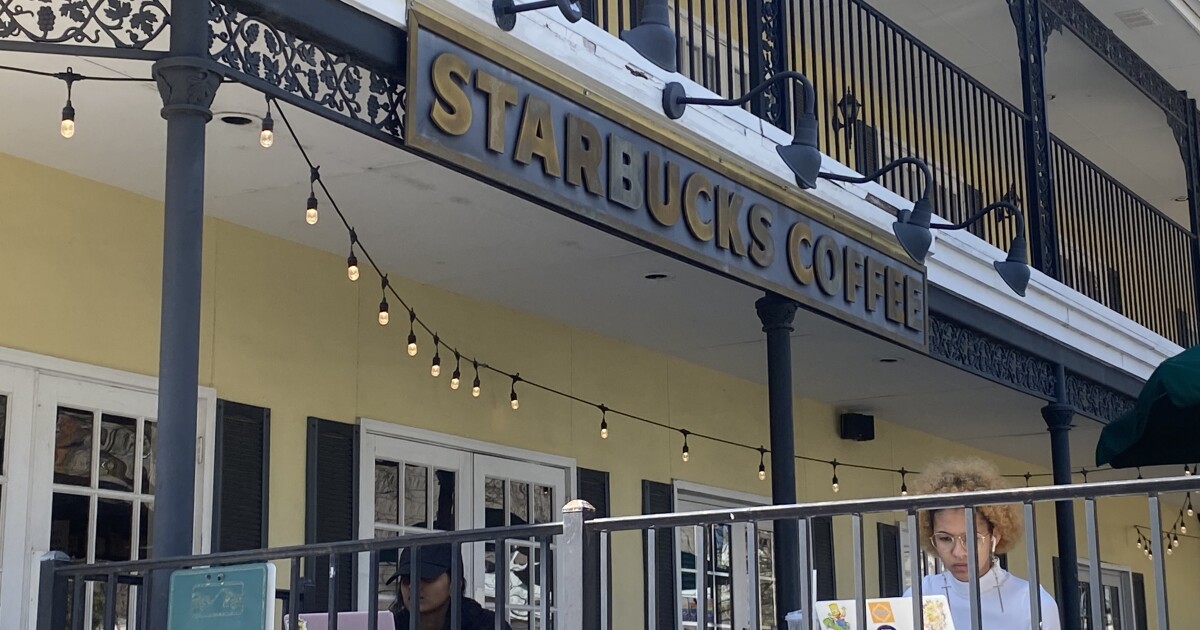 Labor unions have been popping up in non-traditional places in Texas in recent months. The trend was widely recognized when employees at a Starbucks store in Buffalo, NY, unionized in 2021. Today in Texas, at least five workplaces filed for unionization, including four Starbucks stores in San Antonio and Austin.

They are among 54 Starbucks stores in 19 states that now have unions.

Lillian K. Allen, a union member at a Starbucks near the UT Austin campus, says the union gives employees more opportunities to negotiate with their employer.

“We form a union to get a voice, to defend our interests and to defend the issues that are at the heart of us as partners, in a way where we have real leverage,” said Allen.

The Allen store, on 24th Street and Nueces, near UT’s famous “Drag” strip of shops and restaurants, unionized in March.

But service industry workers like Allen are not, historically, typical union members. Indeed, service jobs, says Tom Alter, a history professor at Texas State University, were once considered temporary. People didn’t stay there long enough for unionization to be possible. But that changed after the economic collapse of 2008; job market instability has forced people to stay in lower-paying jobs longer than expected, Alter says.

“I think a lot of people are realizing that it’s becoming more and more permanent. And once you see something that’s permanent or at least longer lasting, you start to get more invested in the workplace and want to make it better,” Alter said.

At Alamo Drafthouse, another Austin facility, movie theater workers at a south Austin site formed a union in February with the help of Industrial Workers of the World.

“There is certainly a rejuvenation of the unions,” said IWW spokesman Maxim Baru, “[and] a change in demographics and unions, among memberships, that is happening and changing union priorities.

Baru credits the pandemic for the seemingly stronger rise of labor unions more recently. It was the opposite of what Baru had expected.

“When the pandemic first hit in 2020, I think a lot of us expected unionization rates to go down,” Baru said. “But in fact, we had an absolute explosion in the number of people submitting applications to get a union at their work.”

Zach Corpstein, who helped organize the union at the Alamo Drafthouse, says the pandemic has certainly been the driving force behind organizing there. He says employees were unhappy with the company’s response to COVID-19.

“One of the issues that persisted when we reopened in 2020 was that there was a lack of transparency as well as poor communication, and we felt this was affecting the safety of not just employees, but also guests and community,” Corpstein mentioned.

Alamo Drafthouse and Starbucks did not respond to Texas Standard’s requests for comment for this story.

Now, with pandemic restrictions lifted in many places, Alter, the Texas state history professor, says efforts to unionize could become even easier for employees.

“You can meet, you can have these face-to-face discussions late at night where you strategize and share your experiences. I think he’s only in a position for this movement to grow even more,” he said.

But unionization can be very different from state to state. Texas, for example, is a right-to-work state, which means no one can be forced to join a union or pay union dues, and there is no automatic registration in a union. in the workplace, unlike, say, New York.

And some, like Glenn Hamer of the Texas Association of Business, argue that Texas’ right-to-work statute gives employees more freedom.

“Employees should have a choice whether or not to participate in a union, and if they do, they should certainly have a choice about any kind of political contributions that are made,” Hamer said.

But right to work in Texas also contributes to the low number of unions in the state. US News & World Report ranked Texas among the 10 states with the lowest union membership rates.

This low rank makes the five new union declarations in two months this year all the more surprising. Some of these new union members, including Starbucks employee Lillian Allen, who have decided to participate in this new labor movement, say they are doing so for themselves and for future employees.

“It’s worth it because we’re worth it and because the partners who come after us will be worth it,” Allen said. “They deserve their time there to be as good as possible, and we want to make sure that’s the case.”

If you found the above report useful, please consider making a donation to support it here. Your donation helps pay for everything you find on texasstandard.org and KUT.org. Thank you for donating today.