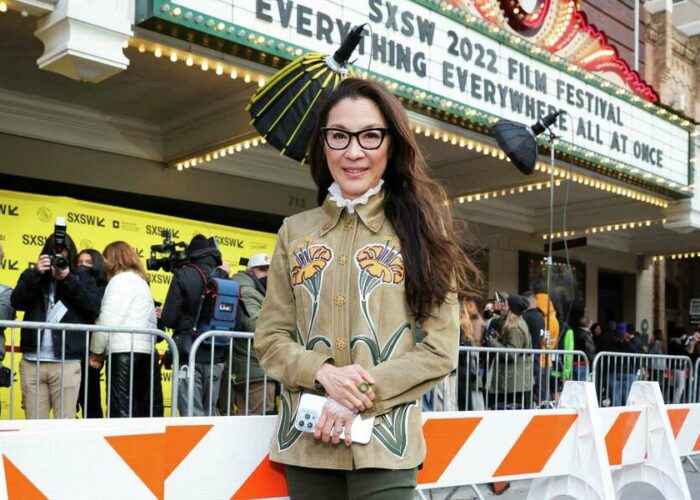 AUSTIN, TEXAS – MARCH 11: Michelle Yeoh attends the ‘Everything Everywhere All At Once’ Opening Night Premiere during the 2022 SXSW Conference & Festivals at Paramount Theater on March 11, 2022 in Austin, Texas. (Photo by Rich Fury/Getty Images for SXSW)

Just like the martial arts mom in “Everything Everywhere All at Once,” the time-traveling action-fantasy flick starring Michelle Yeoh and Jamie Lee Curtis that had its world premiere at the 2022 edition of Austin’s South by Southwest on Friday night, the festival reappears on its feet after fighting for its life.

The annual spring of music, film, culture and tech-palooza, which in 2019 reportedly drew more than 280,000 people to Austin during its 10-day run, was dropped at the last minute in 2020 due to the looming COVID crisis, then migrated online in 2021. Were thong-wearing swarms of 6th Street now an extinct species?

It had been three years since Austin resonated with the strong SXSW buzz, and as of Friday, things were looking a little subdued at the Austin Convention Center — the registration site and location for many presentations and panels — compared to the opening days of the past. But, in the late afternoon – when a long line of moviegoers braved the cold, windy weather for two hours to enter the crowded screening of “Everything, Everywhere, All At Once” at the Paramount Theater of a capacity of 1300 people – the crowds were ready to party like it was 1999, or at least 2019.

While SXSW’s opening night audience is almost always ecstatic – even when the movies aren’t particularly good – there was an extra spark of electricity on Friday night, as if everyone was at both relieved to enjoy a movie together again and determined to return to the way things were through sheer force of fandom and willpower.

South by Southwest runs until March 20. For more information, sxsw.com

The film opens March 18 in New York and Los Angeles and across the rest of the country over the following two weeks.

SXSW Vice President and Director Janet Pierson and the film’s lead cast were greeted with loud, sustained applause as they took the stage and there was a standing ovation for Yeoh after the film. Pierson and Yeoh both echoed that sentiment in their opening remarks ahead of “Everything Everywhere All at Once.” “I’m so excited to be here,” Yeoh said. “Films are shared experiences.”

As for the movie itself, directed by the duo who work as Daniels (Daniel Kwan and Daniel Scheinert, the guys behind the flattering “Swiss Army Man”), critics seemed to be as jazzed up as audiences.

“Here is an orgiastic work of slaphappy genius that functions not so much as a narrative film as a particle accelerator – or perhaps a cosmic washing machine – that two 12-year-old psychotics have devised in the hope of reconciling the anxiety of what our lives could be with the beauty of what they are,” David Ehrlich sang in his A-grade review in Indie Wire while Variety’s Peter Debruge was only slightly less impressed when he said: ‘There are enough ideas in ‘Everything Everywhere All at Once’ to fuel a dozen films, or even a TV series in its own right, but the Daniels have turned it all into 139 explosive and emotionally draining minutes.

One such moment is the SXSW peak, when a movie (or band or app) that few outside the cloistered quarters of SXSW have even heard of becomes an utter obsession. No doubt there will be several more this year – including the horror comedy “Bodies Bodies Bodies” starring Pete Davidson, Lee Pace and Amandla Stenberg and the highly anticipated “Apollo 10 1/2: A Space Age Childhood”. by Richard Linklater. memory of having grown up in Houston at the time of this famous giant leap for humanity.

But all is not enough as it was at SXSW, when the festival enveloped attendees in a seemingly hardened, hermetically sealed cocoon against the outside world and the most important thing in your life was to make your way to a screening of “Bitch Ass (yes, a real title for a real movie this year).

According to the Austin American-Statesman, Austin is in stage two of its five-stage COVID alert system, and was in the dreaded stage five just two weeks ago. For SXSW attendees, that means masking at screenings, a testing site at the Convention Center, and encouragement to use the CLEAR Health Pass app for those who are vaccinated.

And the unfolding terror of the Ukrainian invasion manifests in SXSW donating to humanitarian relief efforts and hosting a Ukrainian showcase on March 19 featuring Igor Grohotsky, KAZKA and SpivOberta while also hosting panels such as “Ukraine, a world in flux and the EU’s response” and “Ukraine for peace: supporting creators and innovators.” (Edited to add: There were pro-Ukrainian protesters at the Alamo Drafthouse on South Lamar on Saturday.)

On Twitter, SXSW went after Governor Greg Abbott for supporting an investigative order into transgender care.

While politics has long been a part of the debates — former Democratic President Barack Obama and current Republican Senator from Kentucky Rand Paul have appeared here — it can be increasingly difficult for attendees to ignore what’s going on. on the rest of the planet, even if only for a few days.

Still, welcome back, SXSW. It’s been too long. Now excuse me while I stand in line for “Bitch Ass”.